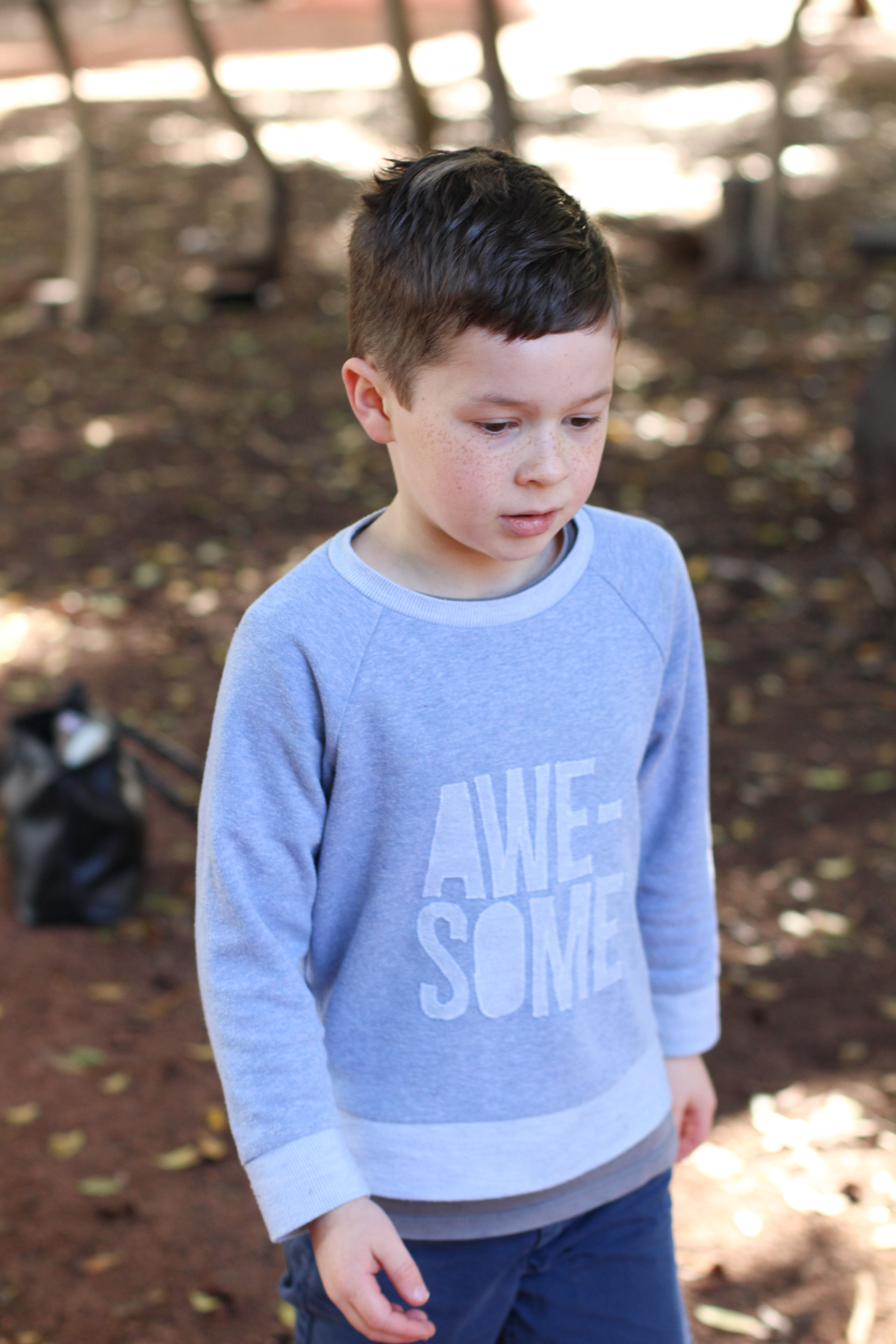 Don’t you love it when you find an amazing pattern and you just want to use it over and over again? I honestly never thought that this would happen to me with a pattern from my childhood – but I am absolutely 100% obsessed with sewing Simplicity 5591 for Buddy.

This is a sweatshirt/sweatpants/tee pattern from the 80’s and we adore it. The first one I made was loved until he had a growth spurt and it became so short that I had to pass it down to his little sister (giving it to Birdie made him slightly happier about parting with it).

But this one, this is my favourite, and it’s Buddy’s favourite too!

I actually made it last year, so it’s now lasted two winters which is always a win in kids clothing. I hate it when i make them something that only lasts one season.

For this version I decide to add some detail to the front of the sweatshirt and i’m thrilled with how it turned out! Since Buddy was quite small if you asked him how he was doing he would say “awesome!”. I loved this so much that while i was working on the Mini Briar sweater pattern , i decided to include some slogan stencils that included two of my favourite Buddy and Bunny sayings. So when I made this sweatshirt i just used the slogan stencils from Mini Briar and it made life so easy! I simply cut out the letters in the sweatshirt fabric using the wrong side so that it would stand out more. To keep everything in place while i sewed the letters down i used my favourite trick – a washable kids glue stick! I just glued down the letters, let them dry and then sewed around the edge of the letters with a narrow zig zag stitch. After sewing it was a little wrinkled, so i gave the slogan a good press and it smoothed everything out beautifully.

The neckband, hem band and sleeve cuffs are all self fabric with the wrong side facing out. That’s one of my favourite sweatshirt tricks for when i can’t find just the right ribbing to match, often the wrong side of the fabric is just the contrast that’s needed.

This sweatshirt was worn constantly last winter and this winter and it’s still looking awesome! See what i did there ;)

Unfortunately this one is starting to look a bit short now too (i had originally made it a little longer than the first version). It will get us through the rest of this winter, but if he grows even a bit taller it will be too short. I’m going to be so sad when we have to retire it next year. Even worse, it means that this single sized pattern probably won’t work for him next year unless i set aside some time to grade it out. I don’t want to retire a favourite sweatshirt and a favourite pattern – the horror!

But hey, that’s next years problem!

I’m so happy that Buddy loves his sweater – and I love that it captures something so much a part of his quirky personality. Now when i asked him how he’s feeling he likes to point at his sweatershirt and just wink. And we both have a good giggle.

I actually made my now 37 yr old son that pattern in the 80s! LOL! Now I’m sewing my 14 yr old son (my surprise baby I had at 47!) the same 90s pants pattern I use for that son when he was 12! You can’t beat old patterns, especially for boys. I never find newer patterns for my boys now that I like more!

That’s so awesome Eliz! I love patterns that last that long – it feels like you’ve gotten value for money then! I agree you really can’t beat the old patterns for boys, i also have never found a newer pattern for my son that i like, but the 80s and 90s ones are always so good!

I liked reading about the process for making this awesome ?? sweatshirt. I always found it easier to sew clothes for our sons because the quality is much better and the choices are only limited by your imagination. Thanks for sharing the great tip on using the reverse side for ribbing.

I agree the quality is honestly so much better when you make it yourself! I have so many things that i made my kids that have been passed down through all three and are still good. At the moment i’m a huge fan of trying to sew things a little unisex (especially pants and sweatshirts) so it can be used for Bunny then Buddy then Birdie. I won’t win every time but that’s the goal!

The ?? In my comment was an emoticon with two hands clapping not punctuation marks. It seems they don’t transfer over from my phone.

LOL no worries this has happened to me before too – i wonder if i need a plugin that allows emojis on my blog – i so often want to use them!

After seeing your post, I tracked down the pattern and bought it – found it new, uncut, on Etsy in a 6-6X – perfect for my eldest grandchild, and I’ll be using it for my other three grands as they grow into it! It’s in the queue behind a few other things, but it’s going to make some great basics.

Oh my gosh Bonnie what an amazing find!! YAY!! So glad you managed to find a size that will work for your eldest grandchild right now and the others in the future – what a win! Honestly, it does make great basics i hope you enjoy it as much as i have :)

pockets do make everything better