How to sew piping into any seam // A Karri dress tutorial 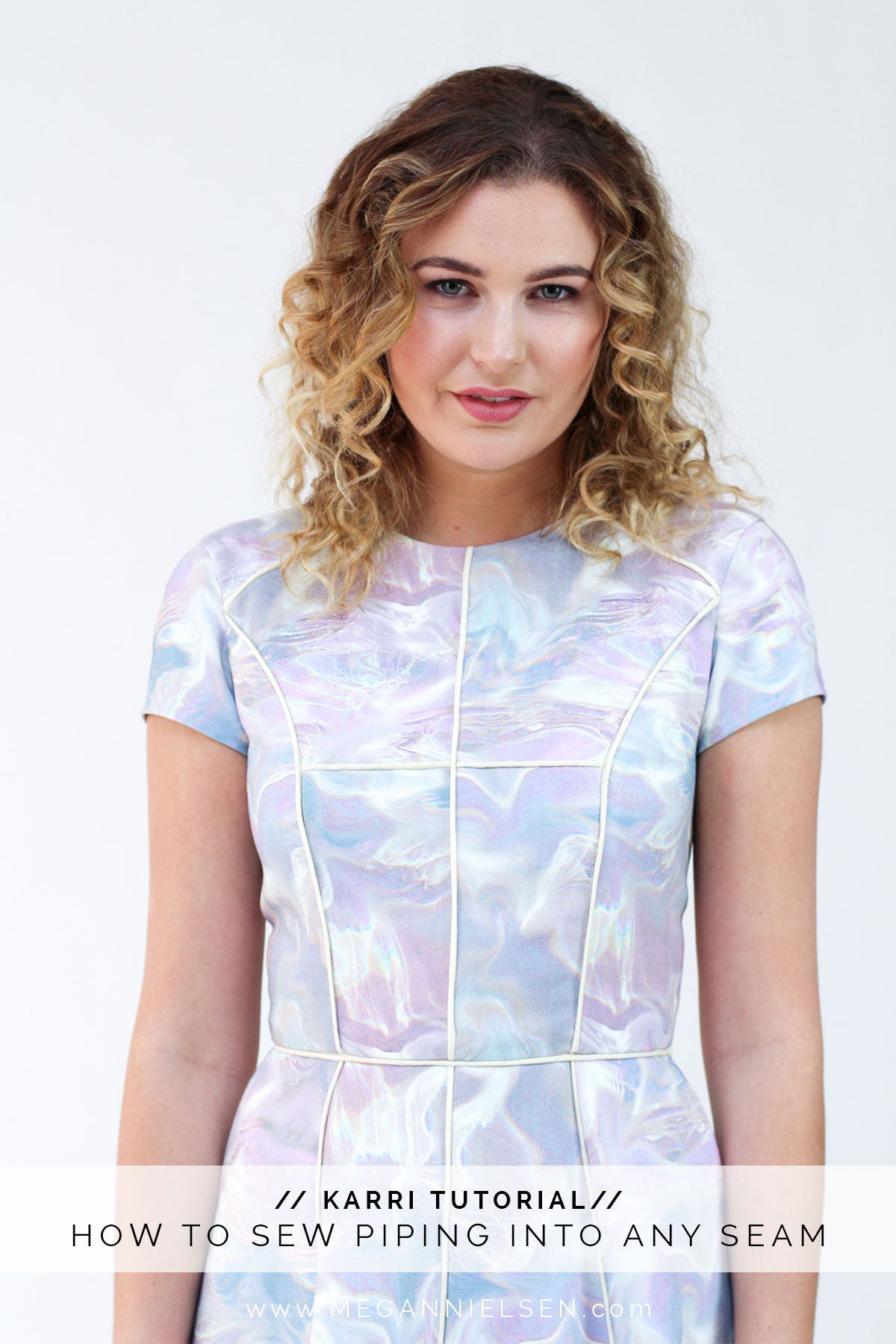 Piping is a really fantastic trim for hi-lighting style lines and accentuating interesting seaming – which makes it a perfect match for the Karri dress pattern! Karri has really distinct style lines, and you can make them even more of a feature in your garment by include piping into some or most of the seams.

It’s a surprisingly easy technique that really takes your project to whole new level. You can purchase premade piping from most sewing stores, or you can make your own unique piping using this tutorial. 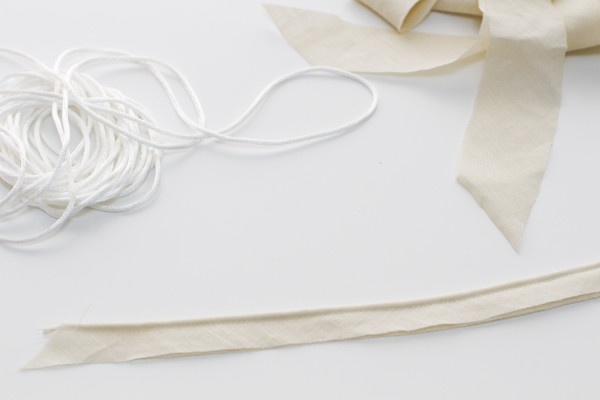 When including piping in your seams it’s really important plan out what seams you would like to include piping into, and to careful calculate how much you will need, then add a little extra just in case!

For this sample i included piping in most seams, and used over 7m of piping. Some of our pattern testers included piping in all the seams and used closer to 11m of piping. I chose to include piping in the most visually important seams and leave the piping out of seams where i thought it would be too bulky or uncomfortable when wearing. As a result i did not include piping in sleeves or side seams, or the centre back where the zipper is inserted. 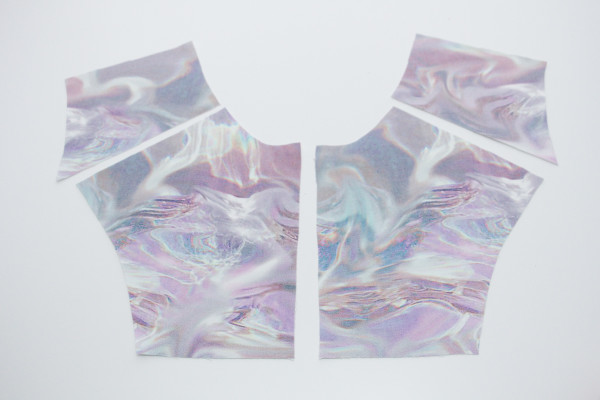 I like to start by laying out the pieces which will have piping included. It helps me visually keep track of where i am. 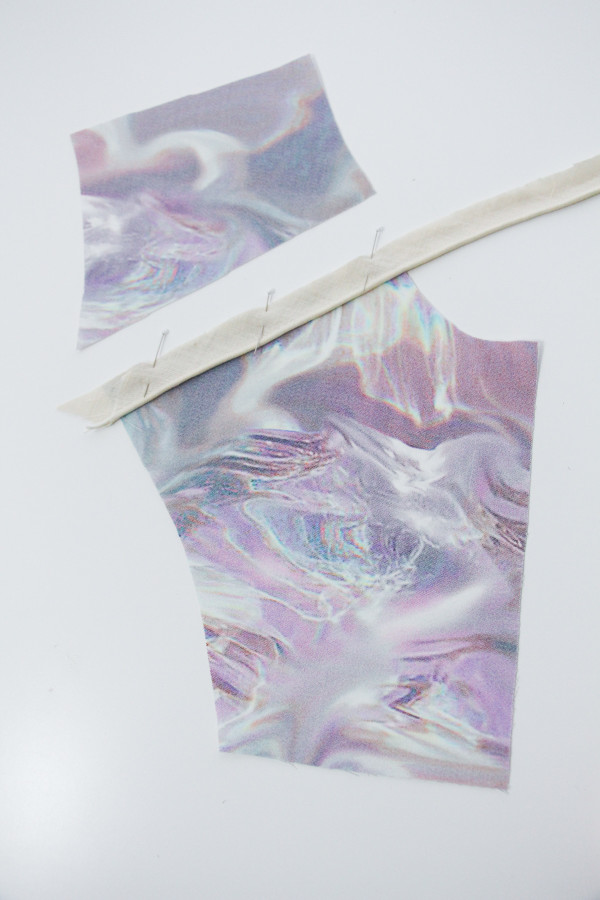 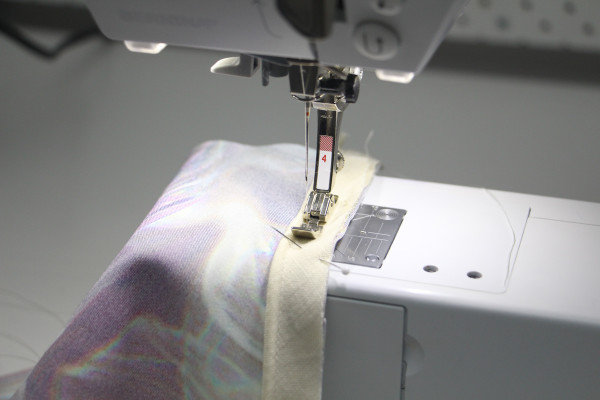 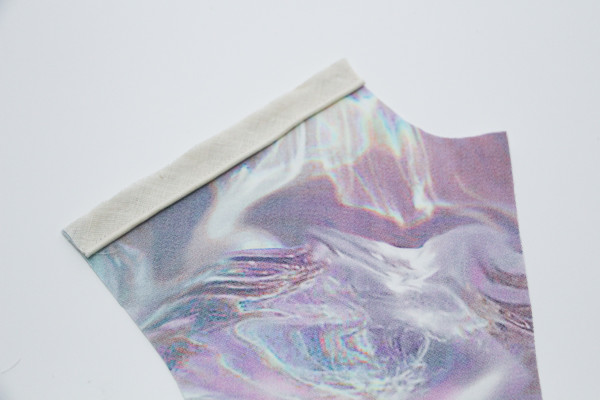 Sew your piping to your seam using a piping foot or narrow zipper foot. At this stage you are just basting the piping to the garment, so you don’t need to worry about sewing too tightly against the cording. 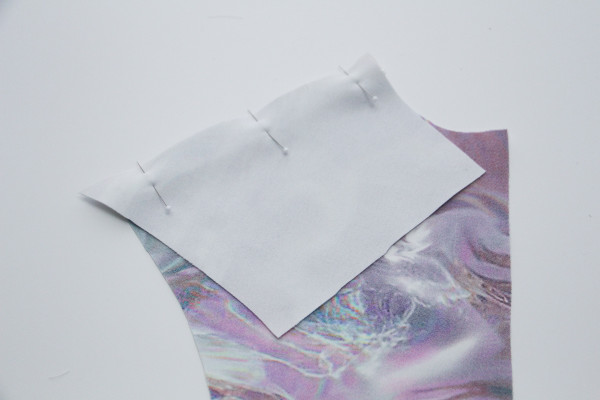 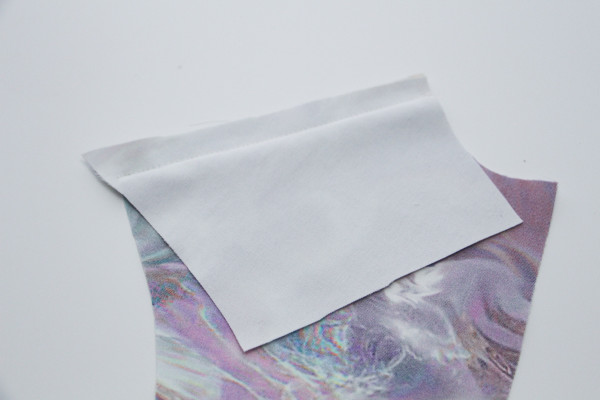 Using your piping foot or narrow zipper foot, sew the seams together as close to the cording as you can without sewing through the cording itself. It’s important to sew very tightly against the edge of the cording. If you don’t get it close enough the first time, never fear, just taking another pass at it.

In this example I am sewing the Yoke and Front Top of the Karri dress together. 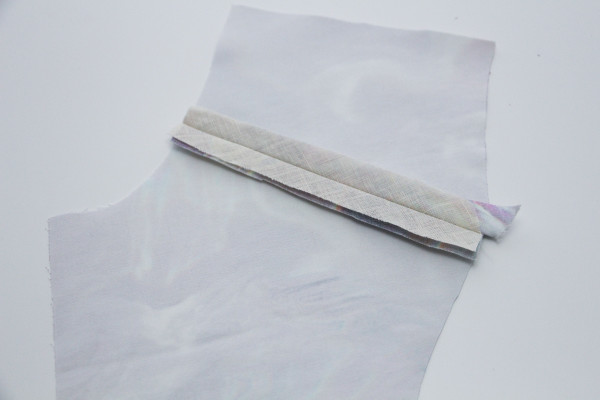 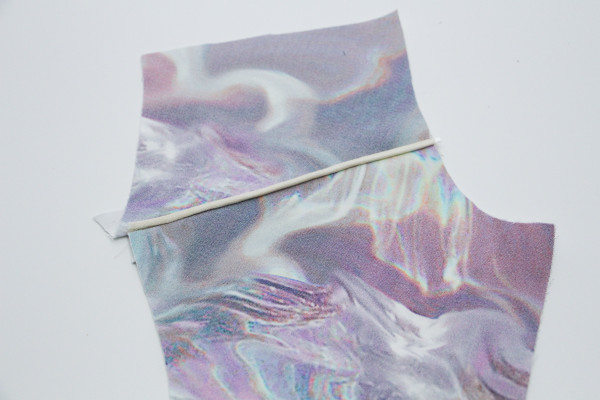 Press the seams open and if they are particularly bulky you may wish to to trim the seam allowance back. 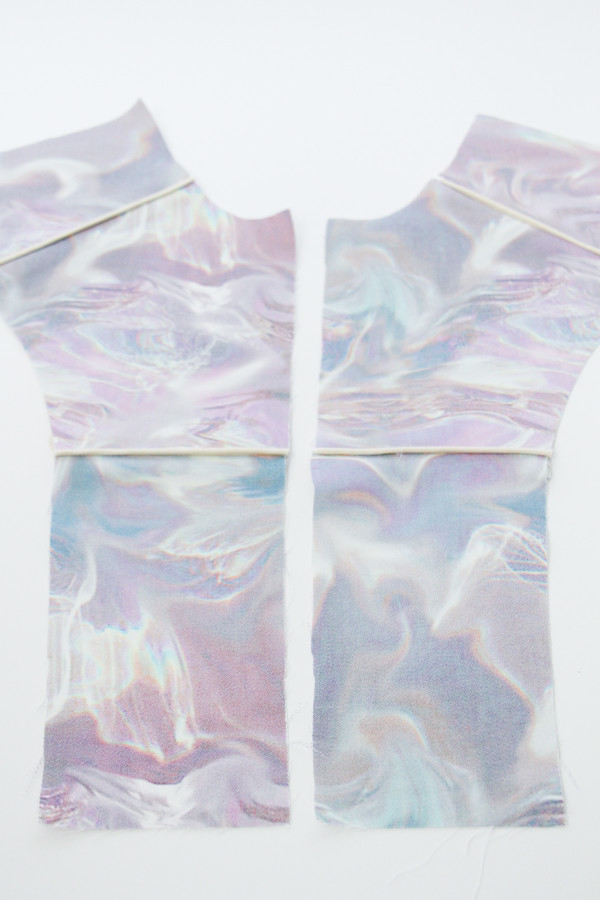 Repeat these steps for the other side of the garment. In the image above i inserted piping into the seams between the Yoke, Front Top, and Front. 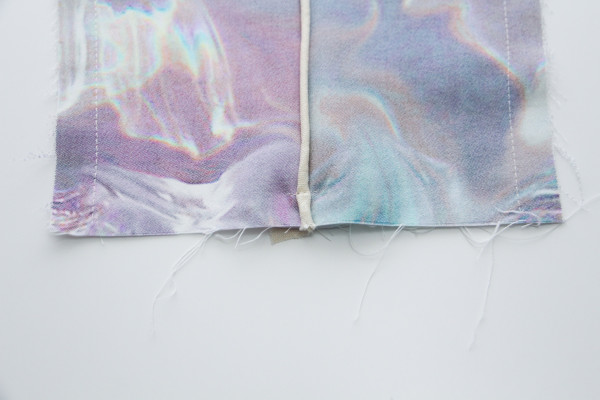 Before you join any piped seams to other seams I think it’s really important to think which direction you want your piping to lay. Since it is now a cylinder that is sitting on top of your fabric it is going to be pushed to the side when you sew, so it’s worth planning what direction you want your piping to lay. Then baste the piping down along the seamline in the direction you want it to lay. This will prevent it from falling the wrong way when you sew your seams. For my Karri dress I decided that i wanted the piping to sit perfectly in the centre of seams and not lay slightly to the left or right of the seams, so I squashed my piping down at the seamline and sewed it flat. 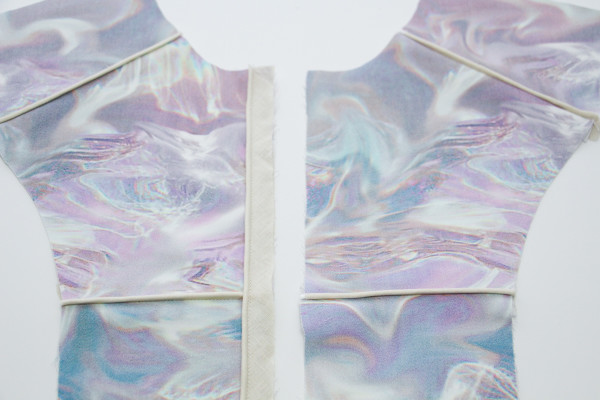 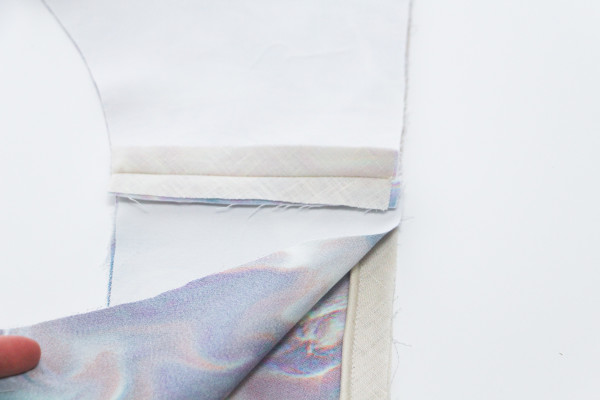 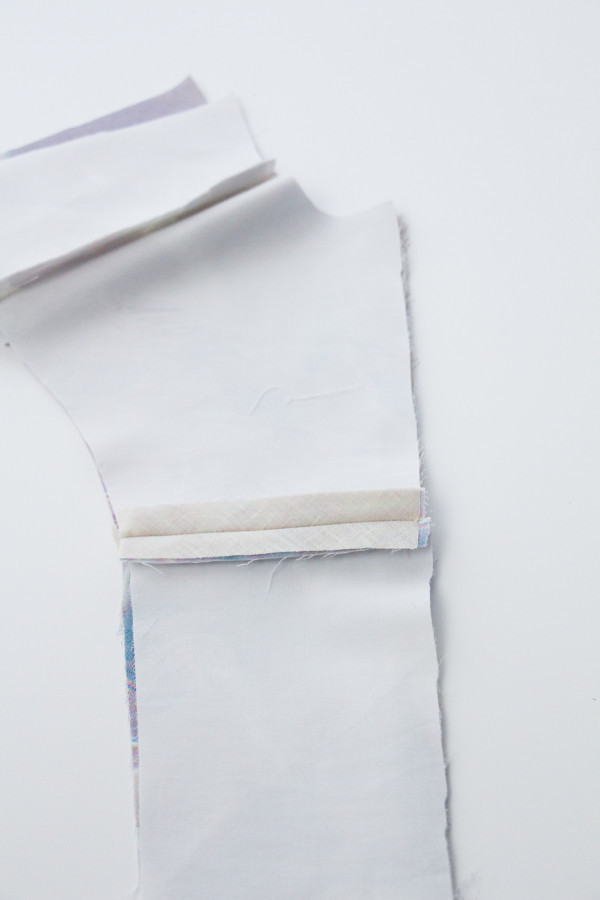 When sewing piping into a seam that includes piping joins, the method is exactly the same as above. Here I am inserting piping into the centre front seam of the Karri dress. First base the piping to one side. Then place the two fabric panels right sides together so that the seams line up and the piping is sandwiched between the two layers of fabric. 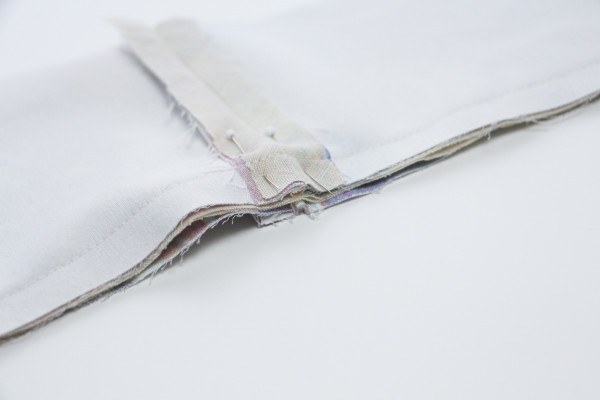 When you come to the seams that include piping perpendicular to your current seam, just be careful to line the two piped seams and pin on either side of the seam to stabilize. If you have taken the additional step i detailed above of basting your piping down to prevent it slipping in the wrong direction then this will go easier for you. 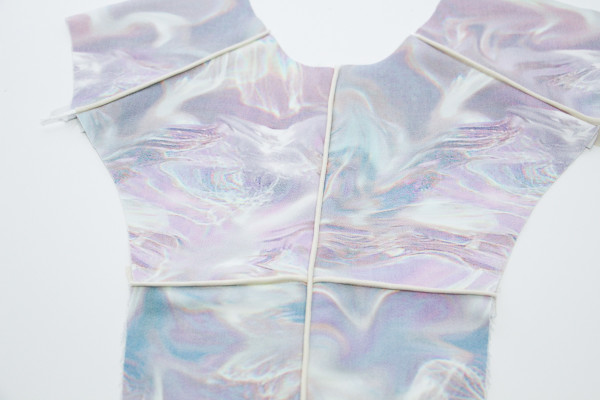 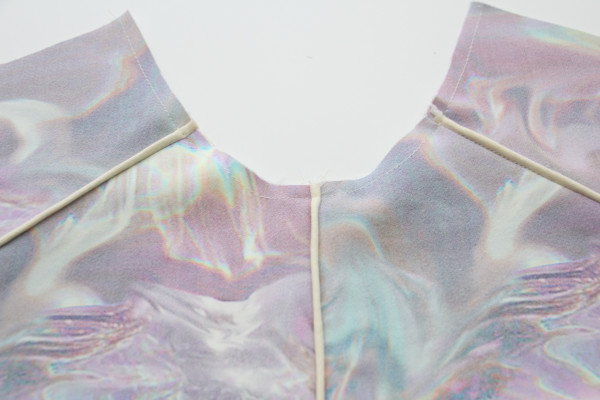 Press the seam open again, and then baste the piping down again along the seamlines.

// INSERTING PIPING INTO A CURVED SEAM // 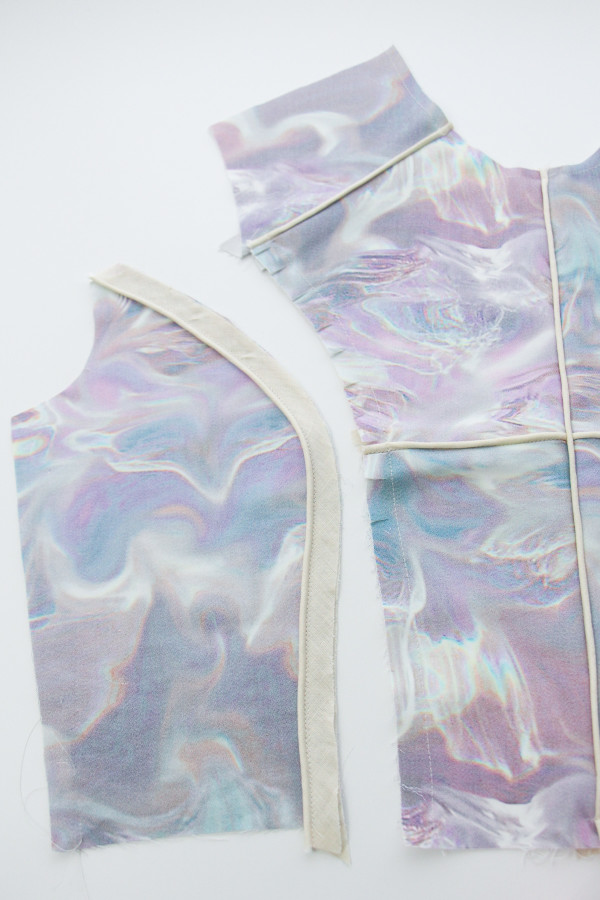 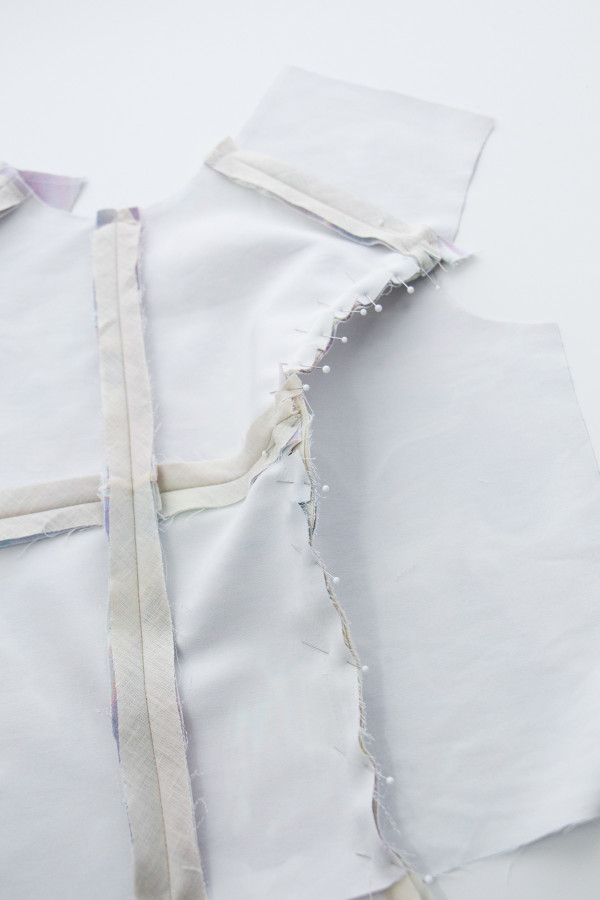 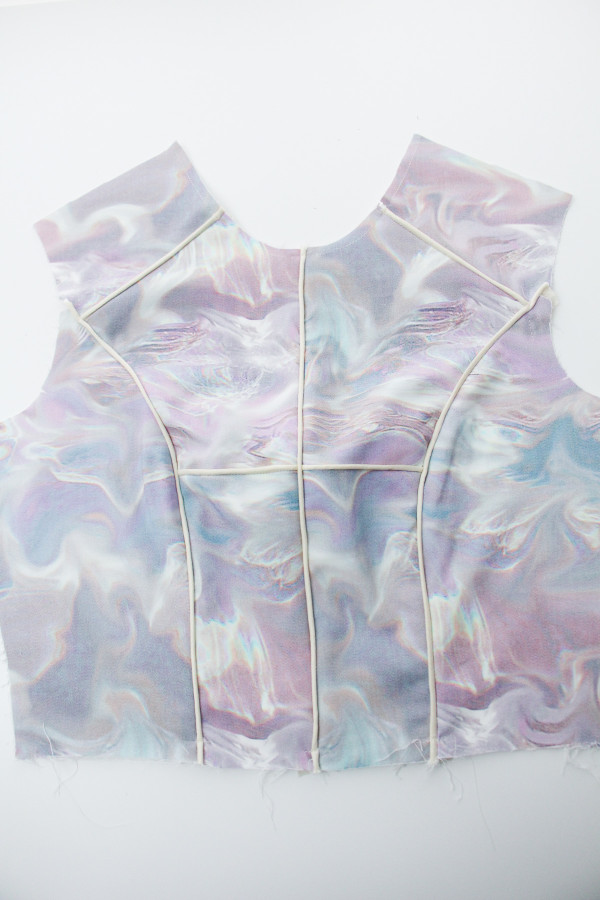 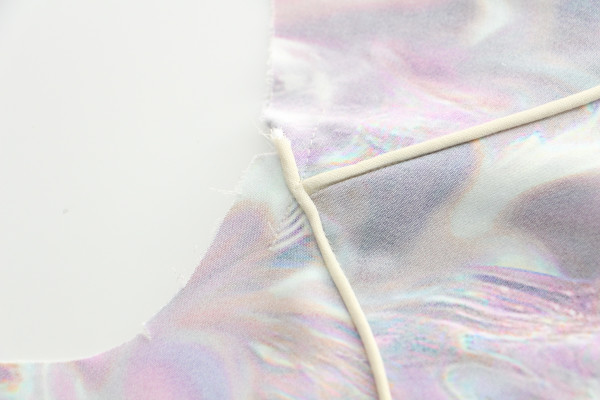 Sewing piping into a gentle curve such as princess seams is actually incredibly easy given the bias cut of the piping. When working with princess seams I’ve found the simplest method is to baste the piping to the curved seam of the side panels. This means that when you ease in the seam associated with the centre front panel (or centre back) you won’t need to ease in the piping or clip the piping, it can simply remain static. If you need some help sewing princess seams, don’t forget to check out my easy tutorial here. 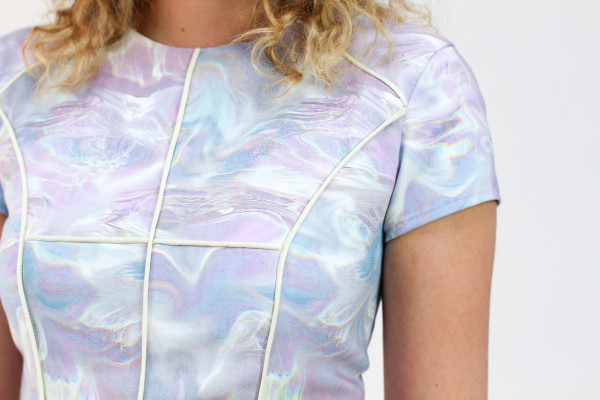 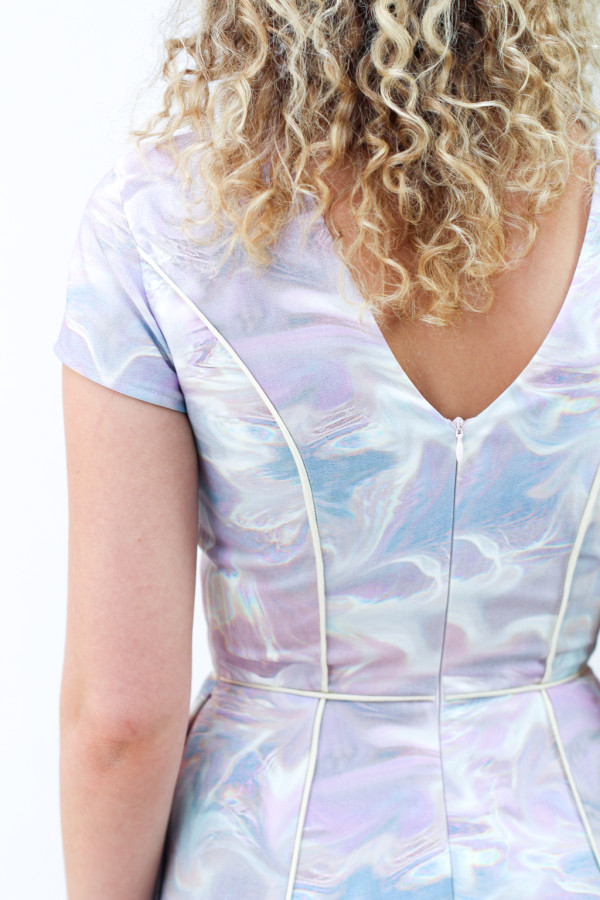 There you have it! You now know how to insert piping into straight seams, into curved seams and how to sew seams with piping that goes in both directions! You can now continue to sew the rest of your Karri dress as per the instructions.

Any questions please let me know in the comments! 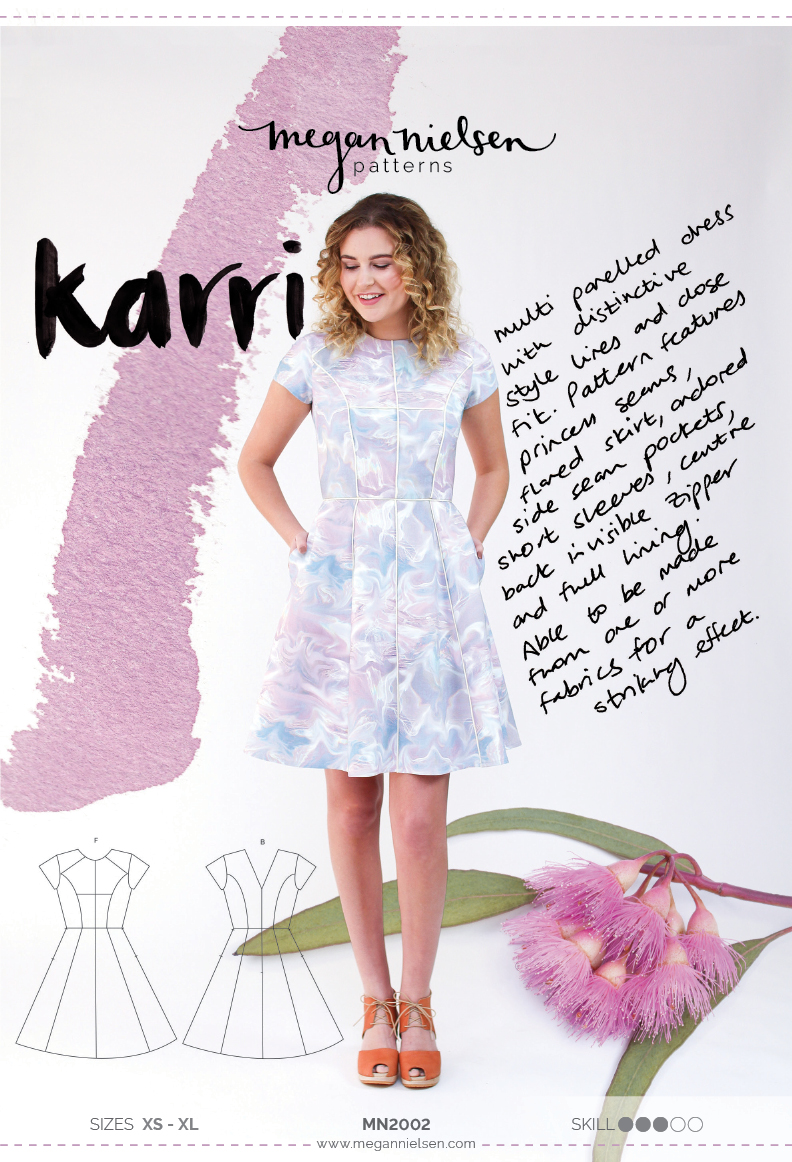 Don’t have the Karri sewing pattern yet? Get it in store here! We absolutely love seeing what you make, so don’t forget to tag your creations with #MNkarri and @megannielsenpatterns if sharing on social media. 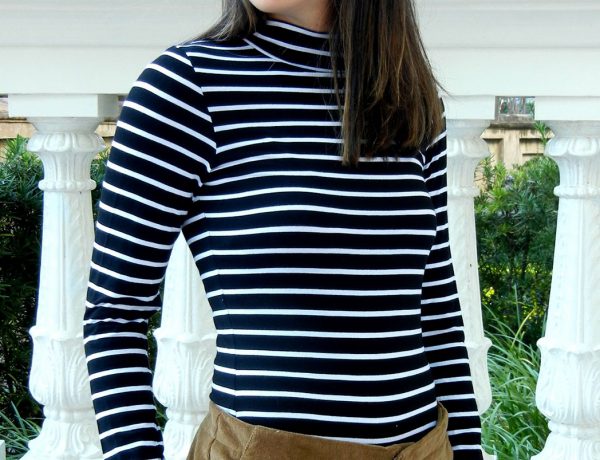 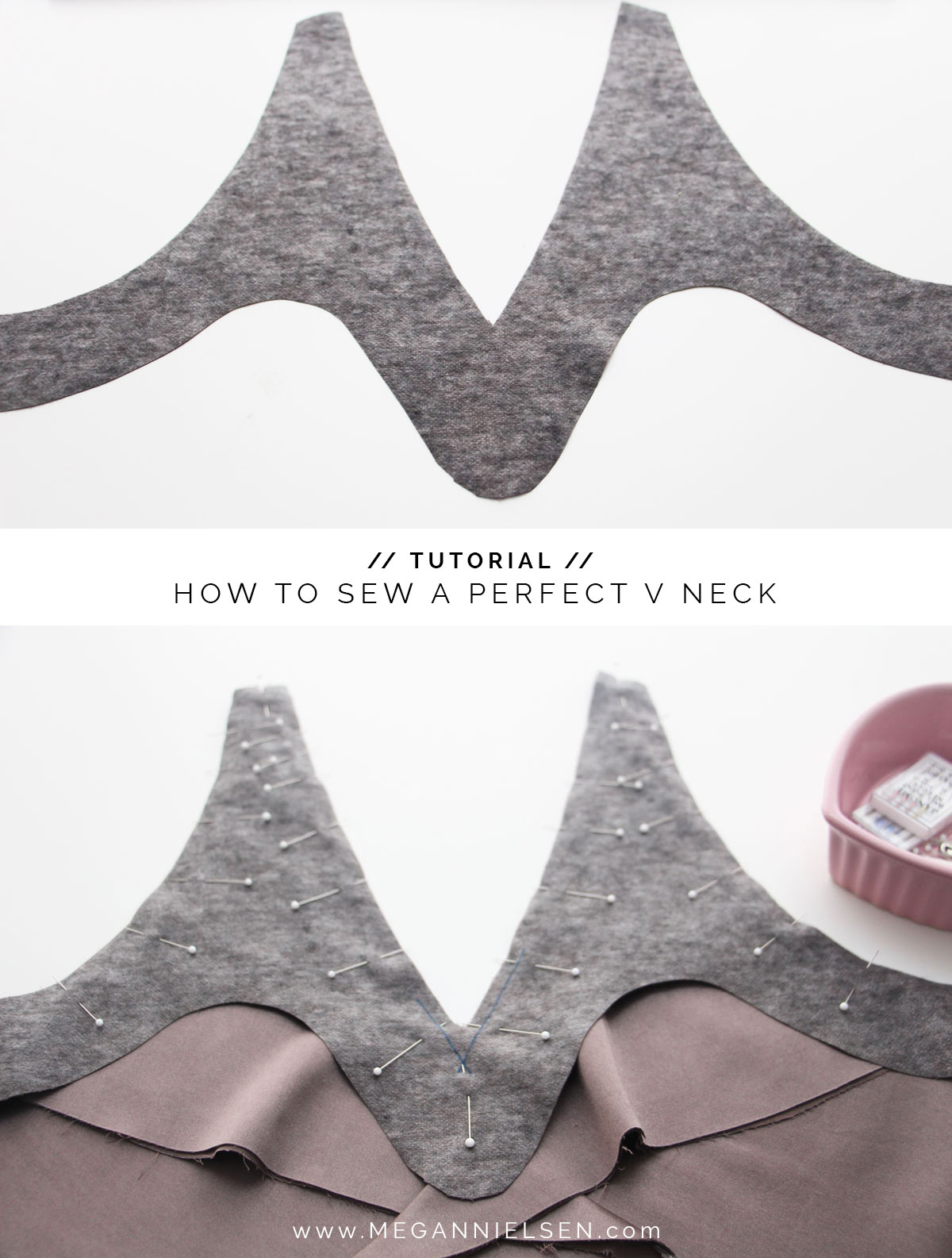 How to Sew a Perfect V Neck on Woven Fabrics 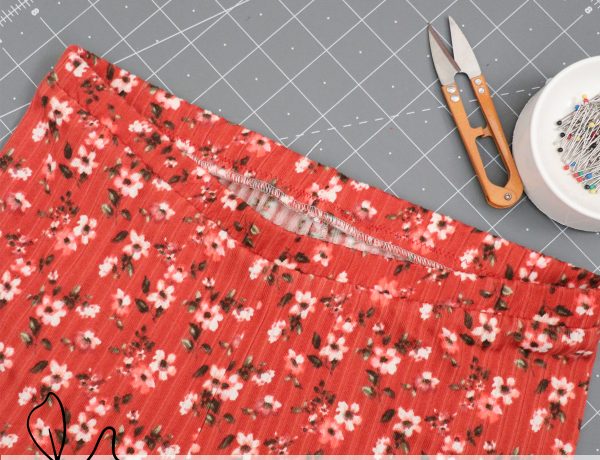 This dress is fantastic! The fabric seriously gorgeous and the tailoring *swoon*! I’m heading to Europe in June for my 10 year anniversary and I want to sew most of my wardrobe from your chic pattern line! Do you have any plans to make a romper? I simply can’t find a sewing pattern for a perfectly cut trendy knit romper and if anyone could make one it’s you!

Just came across this post (Karri Dress with piping)
I’m wondering if you could share how you finished the seams on the underside? I.e. all the raw edges. For example did you overlock? or use a use sewing machine zig zag stitch etc.

I’m working on a project that has decorative piping on panels, however, I am stumped as to how to finish the seams. My seam allowance is similar to yours I think…on narrow side and I am struggling to find a solution for a professional seam finish. Example I have tried to overlock the edges with the standard foot which I think might not be the way to go? Any advice appreciated!

How to make piping // A Karri dress tutorial