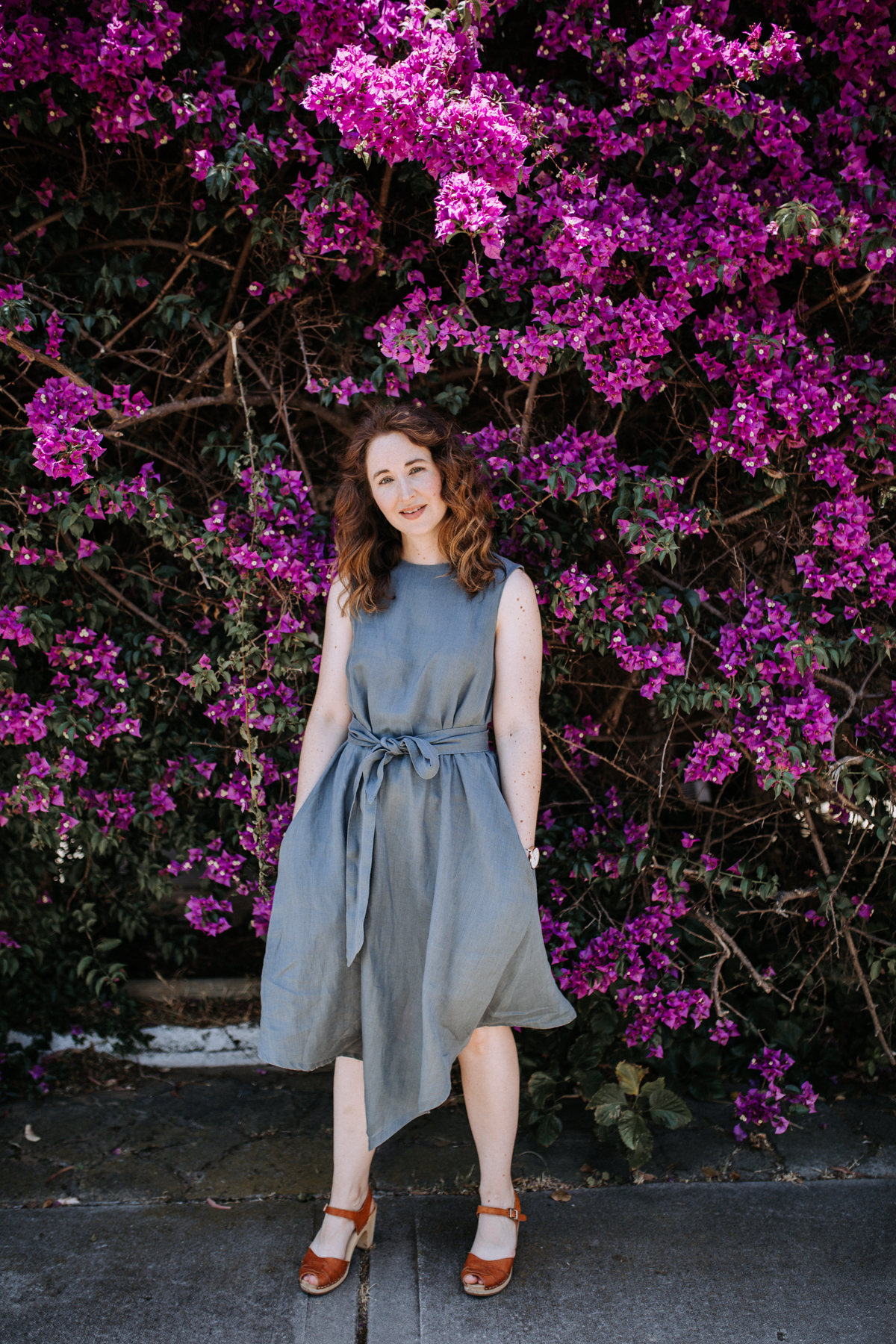 Now that the Floreat sewalong has wrapped up I’m really excited to show you some of my makes! This dress is my absolute favourite and I’ve been dying to share it! The only problem with this dress is that I wear it so often that I’m worried people are starting to think I only own one dress! I’m not joking. I bumped into the same friend three weeks in a row in different places and each time I was wearing this dress and seriously, it was a bit hilarious.

I made it using the most gorgeous linen from Potter & Co – which funnily enough I never considered until I saw it in the remnant pile. It will never cease to amaze me how different a fabric can look depending on the light. Somehow in the display area this Lead linen didn’t catch my eye at all, but in the light near the window where the remnants were it suddenly called to me like a greeny grey vision of fabulousness.

So I did what any sewer lacking in self control would do. I bought some. Even better I guessed the yardage rather than checking the pattern which is hilarious… considering I designed the pattern… and ended up with too little. But sometimes you really can come out with something better out of necessity. I had originally wanted to make a long sleeved dress, but had to leave off the sleeves due to my lacking yardage – and gosh am I glad I ran out of fabric! I love this sleeveless dress and am glad I didn’t need to wait till winter to wear it.

At this stage I’ve made myself a lot of Floreat tops, but this has been the only dress, and I think I really need to make some more! Till then, if you live in Perth and you see me wandering around in this dress I just want you to remember that you read my blog and you know I own more than one dress. Ok? thanks ;) 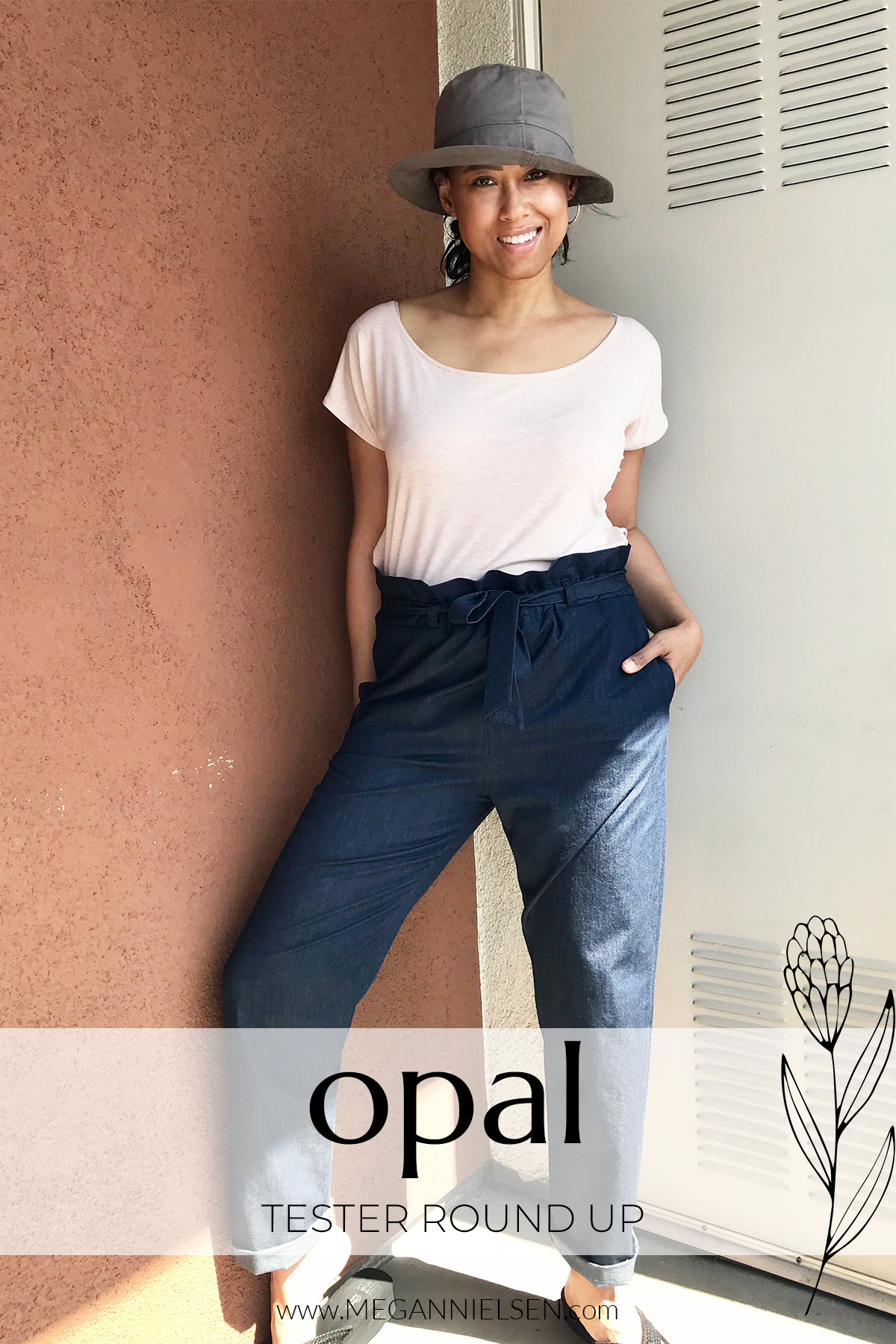 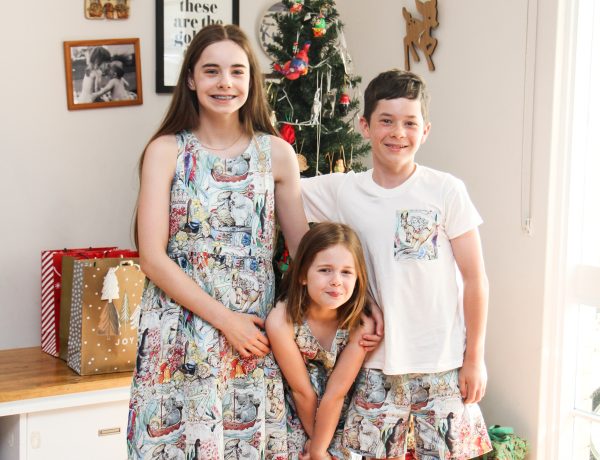 Gorgeous, Megan!!! Love this so much. xoxo

Um… YES! And the backdrop is an OOTD dream!

This color is unreal. So ethereal but grounded, and the sheen! Just gorgeous. I can see why you live in this dress.

Wow! I may NOT see you in Perth, but you look lovely in this linen dress with flowers in the background! I am getting 10″ of snow starting tonight on the New England coast! I have my lightweight material for my shirts in double gauze to try for summer Floreats , but I’m still sewing Jarrah sweaters at the moment! Thank you for so many beautiful patterns. I am working on my mini capsule wardrobe. I need one for all 4 seasons! Darn! I have to just keep sewing your amazing patterns! Oh, well. That’s what I signed up for and loving every minute! <3 Stay comfy!

Floreat Sewalong // How to Sew a Knit Version

Boo Designs rashies for the kiddos