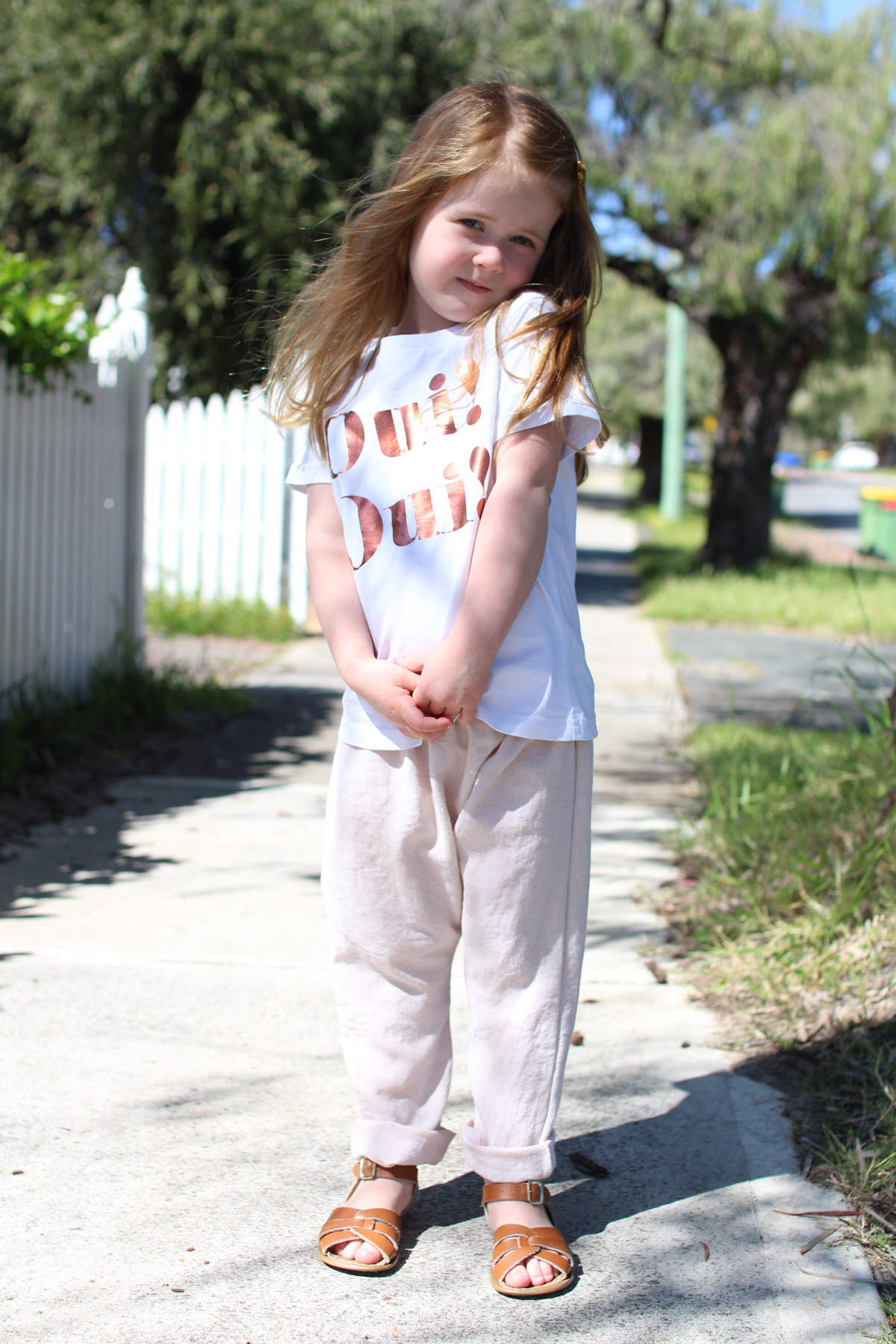 I have been in love with the Wiksten harem pants ever since Jenny started posted development shots of them on Instagram. You only have to check out the hashtag for this pattern to get bitten by the harem pants bug. Unfortunately by the time they were released Birdie was at the very top of the size range, and I was feeling bummed. But I loved them so much and Birdie is a small four year old so I decided to go for it anyway – and gosh am i glad i did!

These were such a quick and satisfying sew! They take a very small amount of fabric, and there are so few steps that i’m pretty sure i was done in under half an hour.

For this first pair I made them in a mystery fabric that I picked up at the Morrison outlet sale last year. I was told it was linen which is why i bought it, but the second i tried to press it, it became apparent that this was not linen or anything natural. It literally will not hold a press, and though these have been pressed and washed multiple times the seams still look spongey. It’s missing the usual polish I like from my makes, and I’ll probably only get over my frustration with this as soon as she grows out of them haha.

Since I was making a size 3 for a four year old I was feeling pretty nervous despite the fact that they seem very generously sized – so i sewed all the seams at 1/4″ with my overlocker and added some length (just an inch) so we could roll them up. That seems to be her preferred way to wear them too.

As you can see she has more than enough room in the legs, so i feel happy with simply sewing a smaller seam allowance. Isn’t it great when you find a simple hack?

It took me a bit of time to get used the silhouette on her. I’ve only seen these on smaller toddlers and babies, and i think they look quite different on a four year old. I was worried that she would be physically restricted or that it would just look like i made ill fitting pants. But now that she has worn them for a whole season i’m feeling pretty satisfied with her range of motion, and I’m really enjoying this different silhouette on her. She calls them her Taekwondo pants because they remind her of Buddy & Buddy’s uniforms.

Now that I’ve made a test run in cheap mystery fabric I’m going to crack out the floral Liberty print I’ve been hoarding for these. I’m so excited!

The only problem is that we are towards the end of the cold months now, and i’m wondering if it’s a waste to make more long pants. I probably should have gotten started earlier in the season, but I’ve just been so so busy with new pattern development that personal sewing fell to the wayside. I hate it when that happens!

What do you lovelies think? Should i just go for it? Logic be damned?! 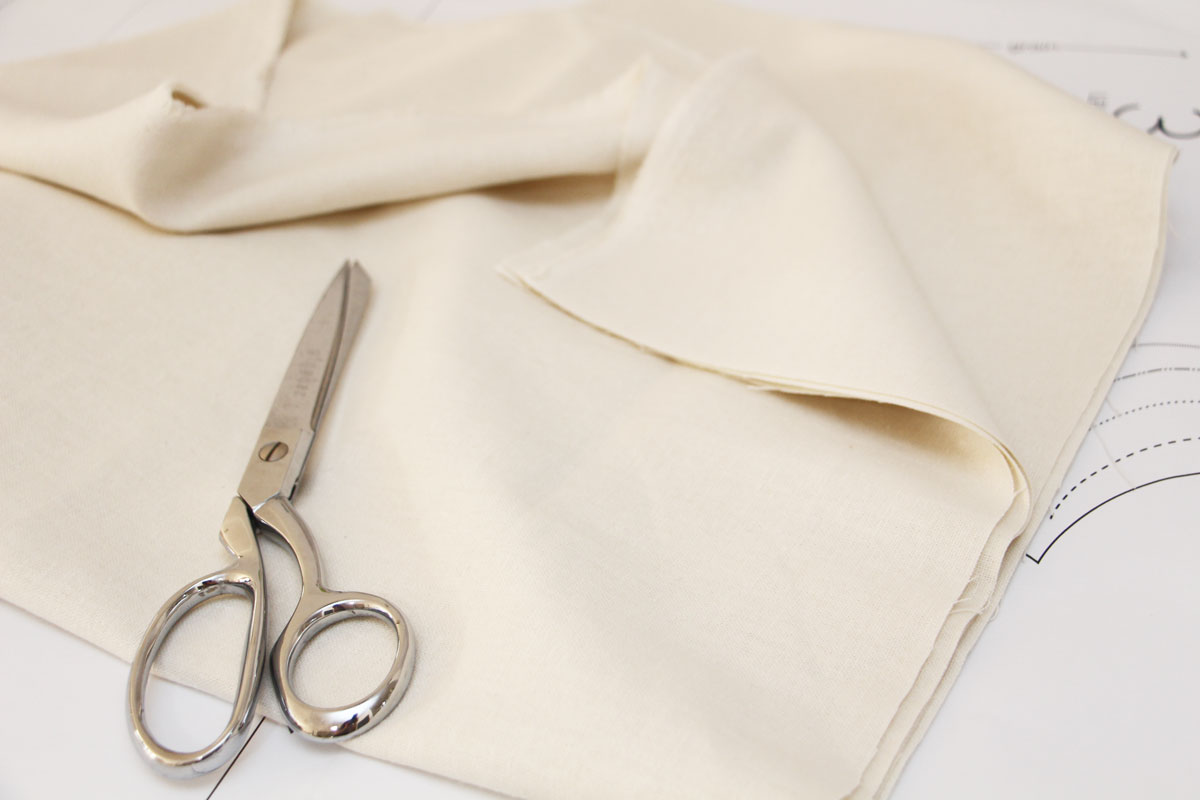 The case for shopping small 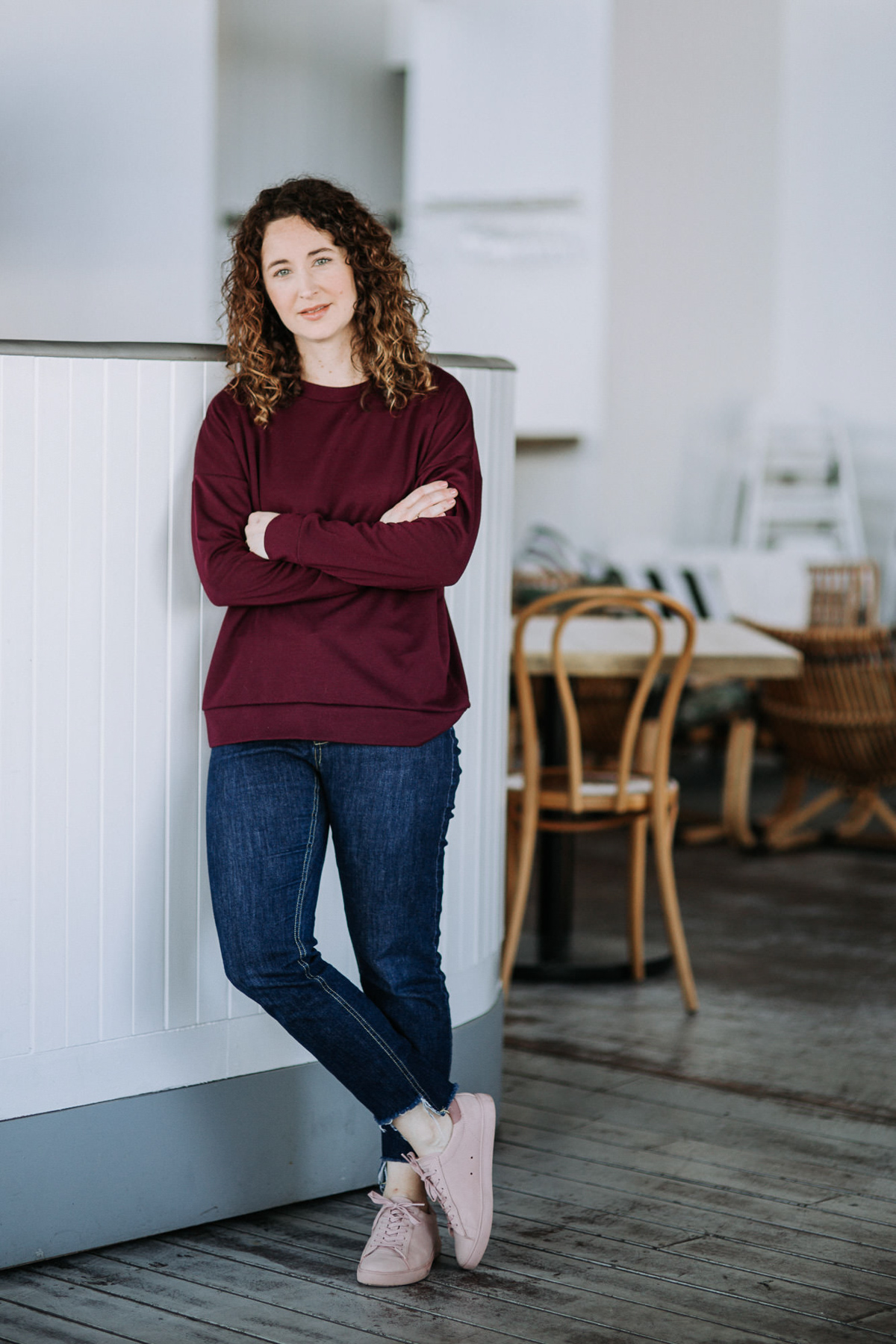 The one I made for lounging

I’ve made these pants for my daughter, which go up to size 14. They have been a big hit! Maybe save your liberty for them in a bigger size??
https://www.tadahsewing.com.au/products/chillax-pants-set-big-kids

Oh Angela! Thank you that is such a great pattern recommendation! Up to size 14 means i could make it for all the kids. You absolutely rock! I agree, i think this might be a wiser choice for the liberty. I find it really hard to cut into something special if it won’t have longevity. Thanks!! xo

I’d love to make them for myself! How about an adult version?

I agree! That would be fun! I wonder if anyone has made a pattern for that – off to google i go!

Make more of them in some light fabric – chambray, viscose – so she can use them in spring and summer.

I think that’s a really great suggestion – sometimes that transitional light clothing is actually the hardest to find and most useful!

Liberty pants* are always in season! :) VERY cute… I must make a pair for my Roxanne!
*Read “Liberty anything”!

Hehehe gosh we are enablers aren’t we! I agree 100% Liberty forever!

What’s funny is to me these are summer pants! If it’s a light weight fabric them I think they’re perfect for the warmer months. But we live in the Pacific Northwest and it never gets too hot.

You make a really good point! I think my concept of what makes winter clothing is quite different to more extreme winter climates. I’d say our winter is probably closer to your Fall? Our summer is pretty blisteringly hot (we like to joke that it’s like the surface of the sun LOL) but i think you’re right, in a light weigth fabric we could probably get away with these for days that are milder!Thanks!