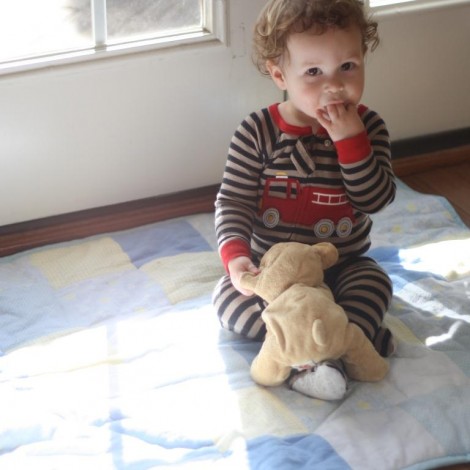 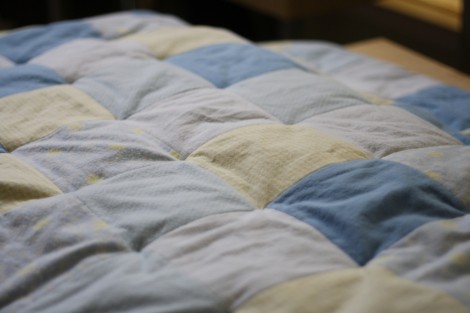 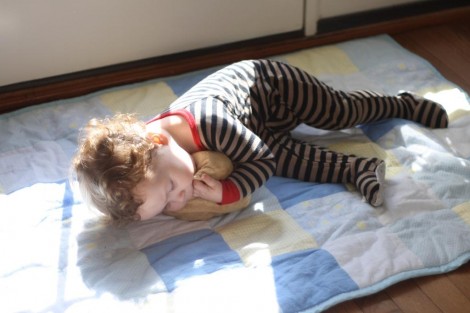 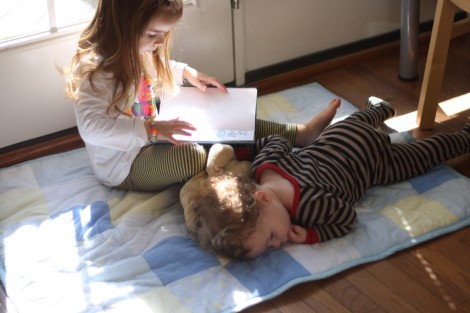 Remember the quilt I made for Bunny last year? Well here’s Buddy’s!

I decided to be (slightly) neater than last time. So I instead of using a bunch of random shapes and piecing them together as I went, I made all the fabrics in equal squares, and then randomly put them together. I think it turned out really cute, and definitely a bit neater than Bunny’s. Though I think serious quilters would still shudder at my methods, I think I’ve learnt a lot since last time!

So a couple of people asked why, since I hate quilting so much, I’ve chosen to make quilts for my kids. hehe, that’s a really good question! Basically when Bunny got old enough to start using a blanket, it was winter, and so I wanted to find her a nice toddler doona (comforter). The problem was every one I found was some ridiculous princess or Dora the Explorer print, and I just wanted something pretty to go with the sweet floral prints in her curtains and things. Which is when I realised I had offcuts of the same fabrics, and a few other cut prints lying around, so I decided to make her something special and pretty, that she could keep.

And now that Buddy is old enough to use a blanket on his own, I’ve come across the same issue (cars, spacemen etc), and wanted him to have something just as special as Bunny’s.

I think it turned out pretty great! I absolutely melted at the huge smile and giggle I received from him when I showed it to him for the first time. Yep, sewing all those squares was totally worth it for that gorgeous boy! Though I won’t lie… this is probably the last quilting project i’ll do for a long time (of course, till i have another baby hehehehe) 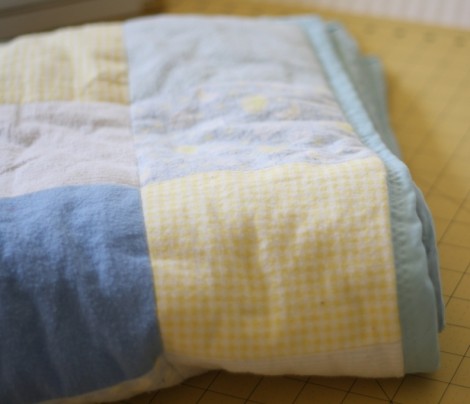 ps. I have to add, that as I was trying to take photos of the blanket, Buddy lay down still in his PJ’s and then Bunny ran over with a book. She then commanded me to leave, so she could read him a story. It was pretty much the cutest thing ever! I don’t think I’ll ever forget it 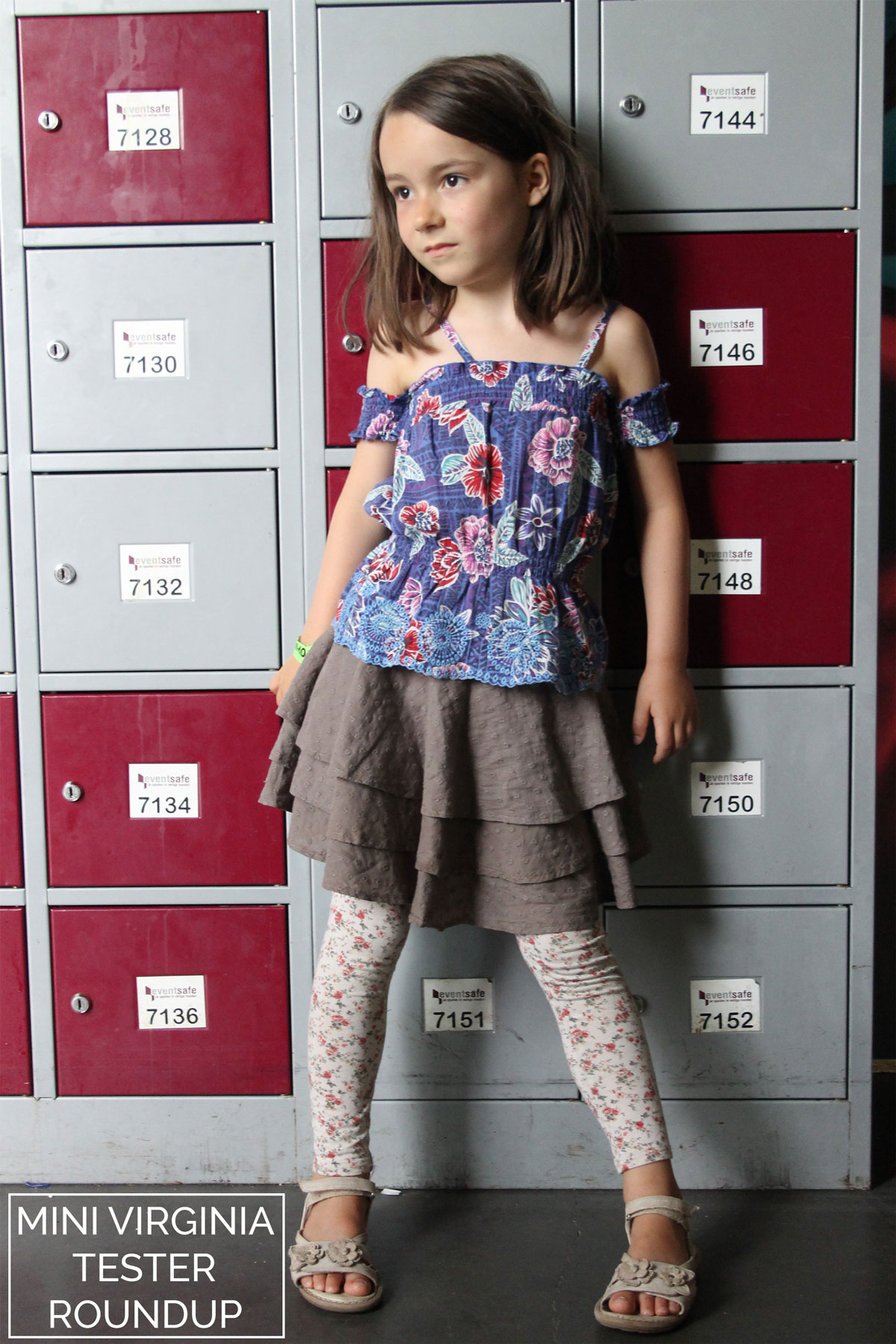 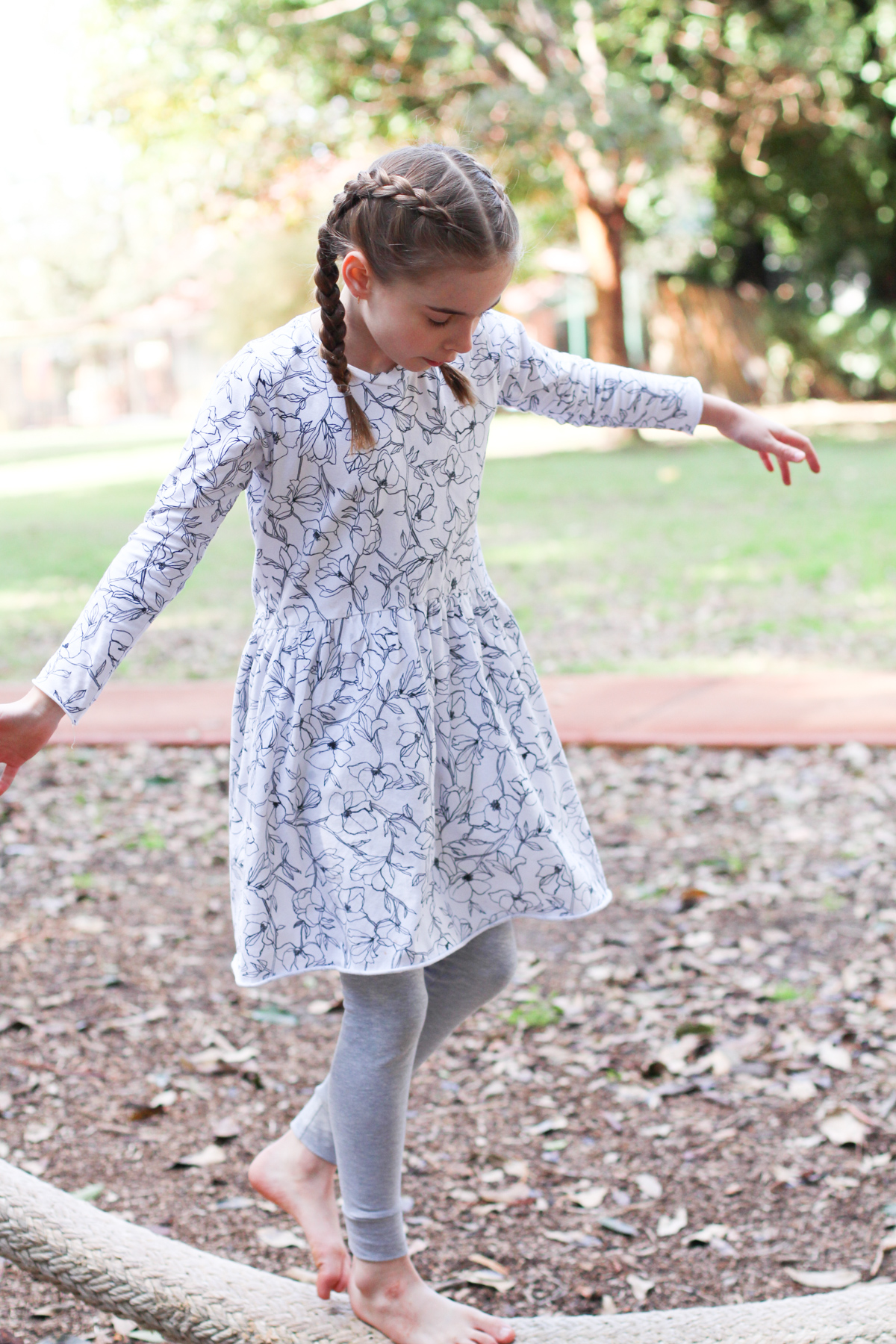 I think you did a great job!

I don’t like that anything you try to buy for kids nowadays is covered in commercial characters. I’ve had a tough time finding gifts for my nieces and nephews that aren’t based on some movie or tv show. It feels like brainwashing to me!

As a child, I just ADORED My Little Ponies. But I just had the toys, no MLP wallpaper, comforter, chair, T-shirt…..

I hate the cartoon insanity. Even when it’s not branded (like Dora or Elmo or whatever), it’s impossible to find clothing or bedding or ANYTHING for kiddos that isn’t emblazoned with cartoons. I finally settled on a classic quilt for The Pup, too!

Oh my goodness i know!! the cartoony junk drives me to insanity! It’s pretty much imipossible to avoid. I love that you got the pup a classic quilt too – i think when they grow up they’ll make nicer keepsakes hey?

I have a couple quilts from my grandmother/great grandmother. And you should know I’ve always cherished them. Even the very simple ones. I think it’s a wonderful thing to pass down to your kids. Way cooler than a DORA blanket. :)

Thanks so much – it really does encourage me to hear that! i hope they cherish their’s too :) xoxo

I’m so intrigued by your quilt in a day method – sounds really interesting, i’ll have to try and find a tutorial for it!! Thanks for the suggestion!

The Cheaters Method of Shirt Downsizing