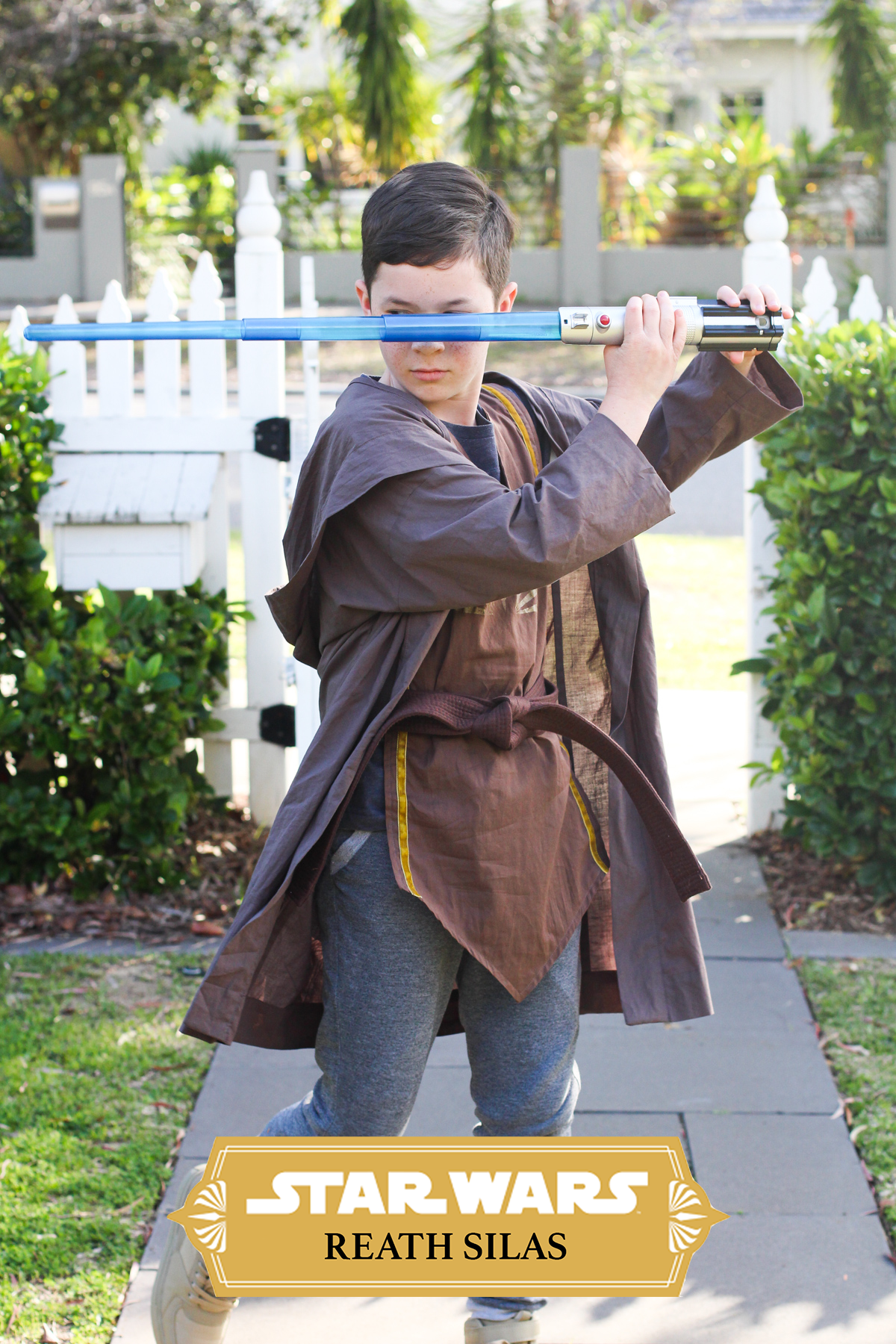 This Book Week Buddy’s costume dreams came true and we’re both just a bit excited! We have a Book Week rule in our family – I will make any costume the kids want, as long as it’s from a book. If a movie exists for that story, that’s fine, but the book must have been written first. Sorry, no books based on movies, no super heroes or Disney princesses etc. Buddy is obsessed with Star Wars and with the release of the new Star Wars High Republic book series (a series of novels for teens set in the Star Wars universe about completely new characters who have not and will not be featured in movies) he finally found a way to be a Jedi for Book Week! So today I give you, the Reath Silas Star Wars Jedi costume! 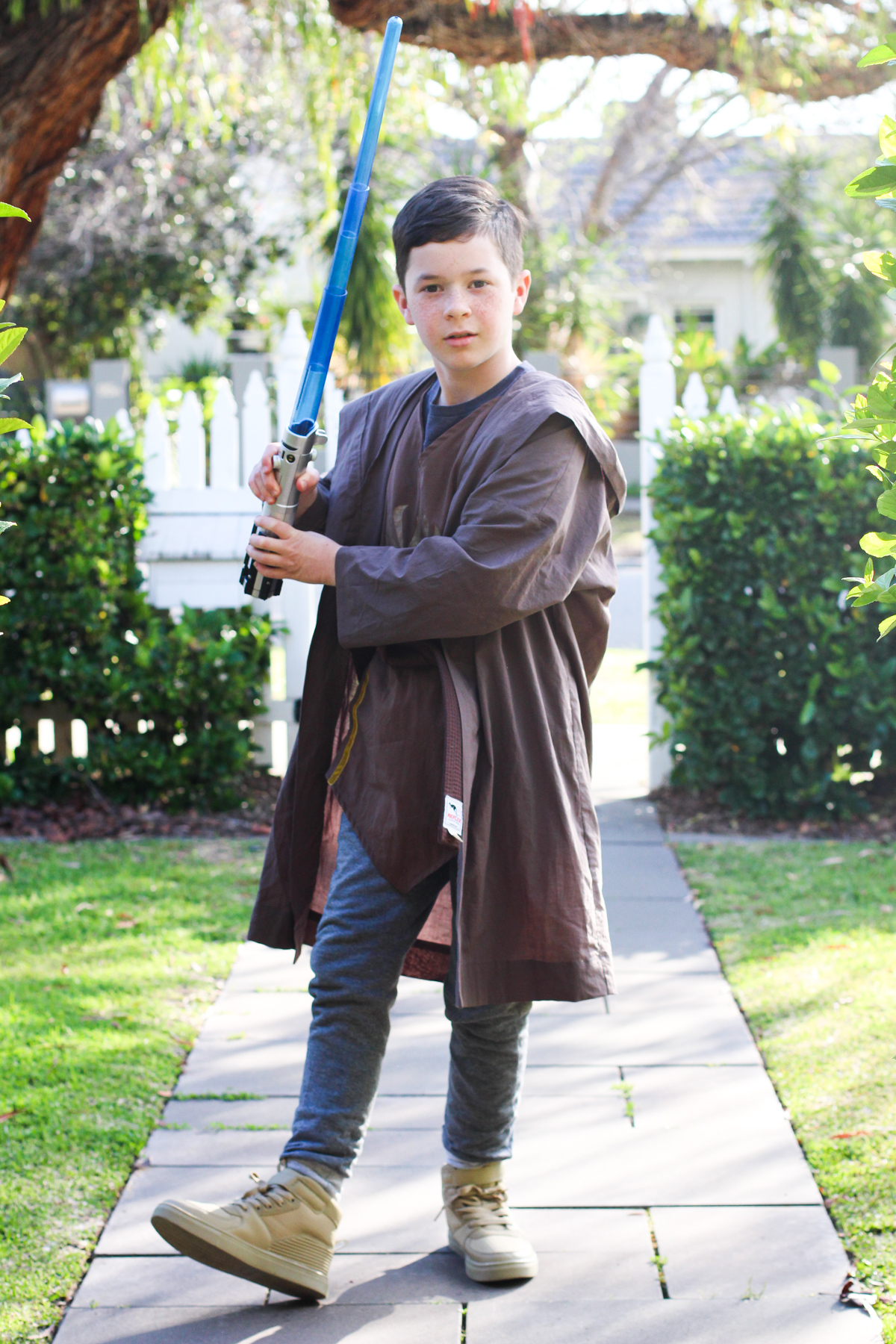 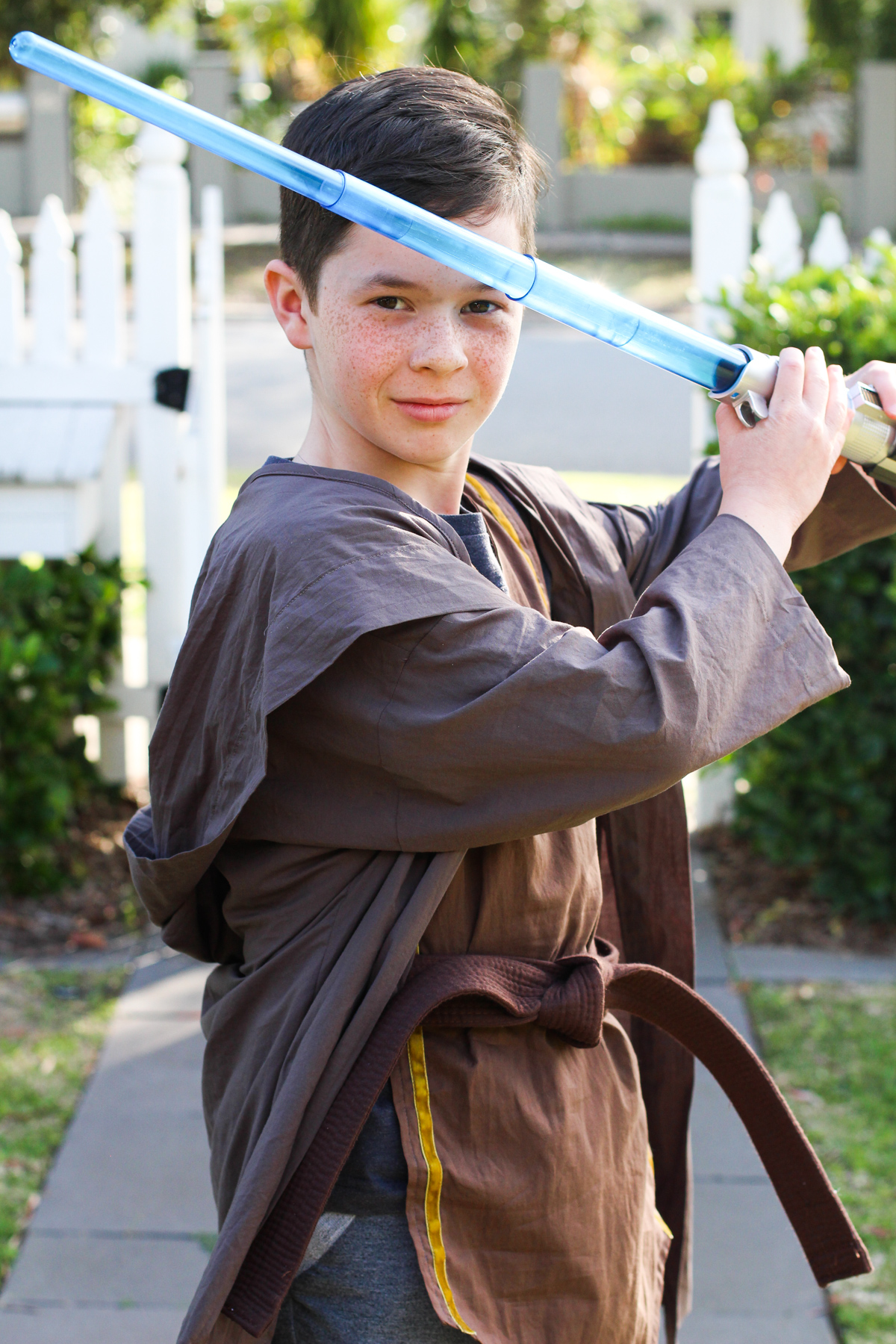 The character that inspired this costume is Reath Silas, From the High Republic: Into the Dark book. That’s the first book in the teen series, and unfortunately the details of the costume aren’t really clear on the cover. A little more is visible on the second book Out of the Shadows, but thankfully the Star Wars website released concept art of each character and the concept art for Reath Silas was the main inspiration for our costume. We did of course make some changes to make it more achievable and also more inline with Buddy’s preferences. 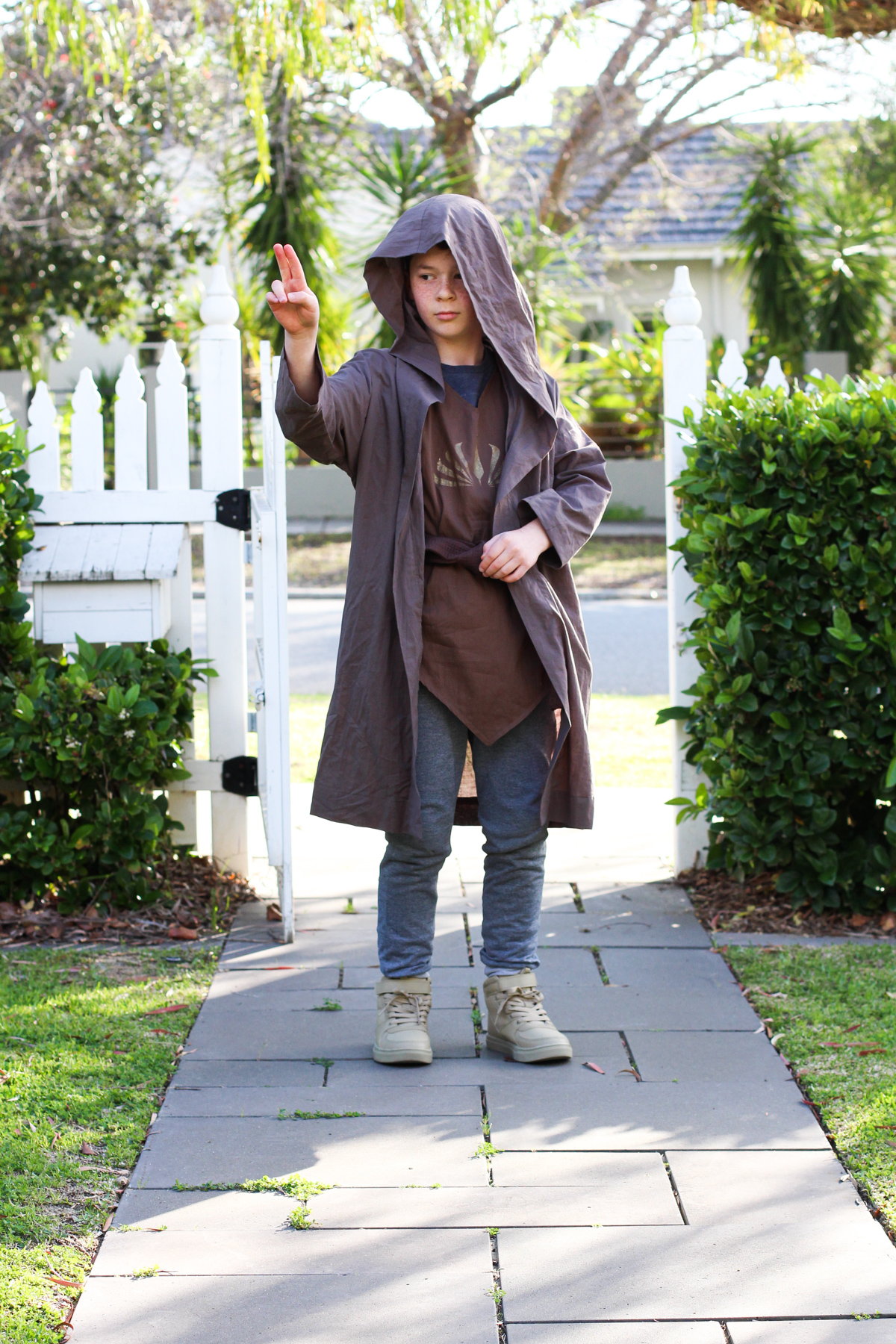 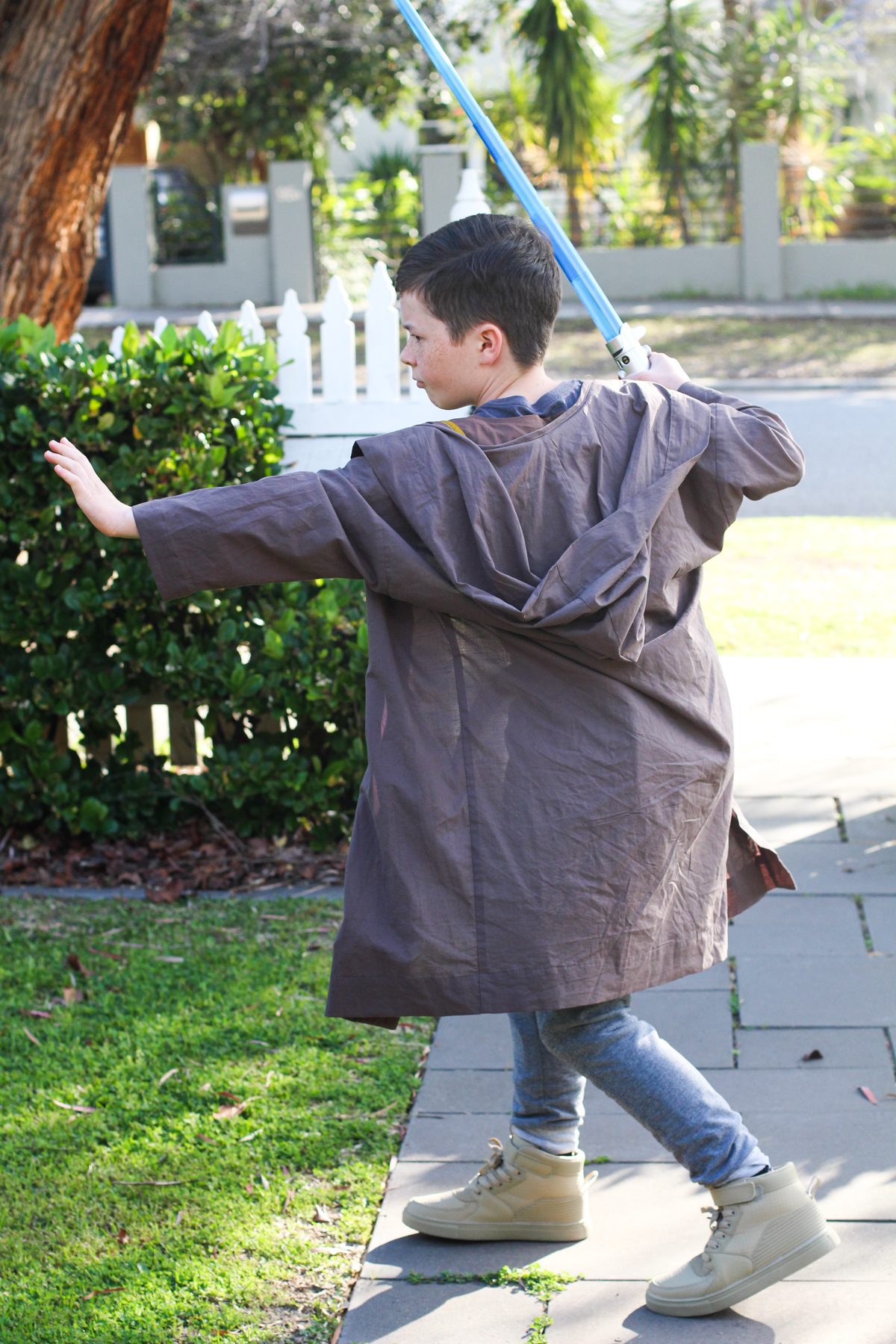 This costume includes a lot of elements so I am going to start with the biggest one – the cloak! Are you ready for it? It’s actually a Hovea pattern hack! Buddy’s grown so much he’s getting close to a size 0 in my size range, so I cut out the View C coat knowing it would be oversized for him and get me close to the desired aesthetic. I had to shorten sleeves and left off the pockets and all other details. I ended up drafting an oversized hood for this costume with an integrated collar band. It was a super weird looking pattern piece – it looked like a medieval axe haha.

I’m so happy with how it came out! I went a little overboard and sewed a combo of french seams/bound seams over the whole garment. Don’t ask me why, I don’t know. I guess i just wanted to? 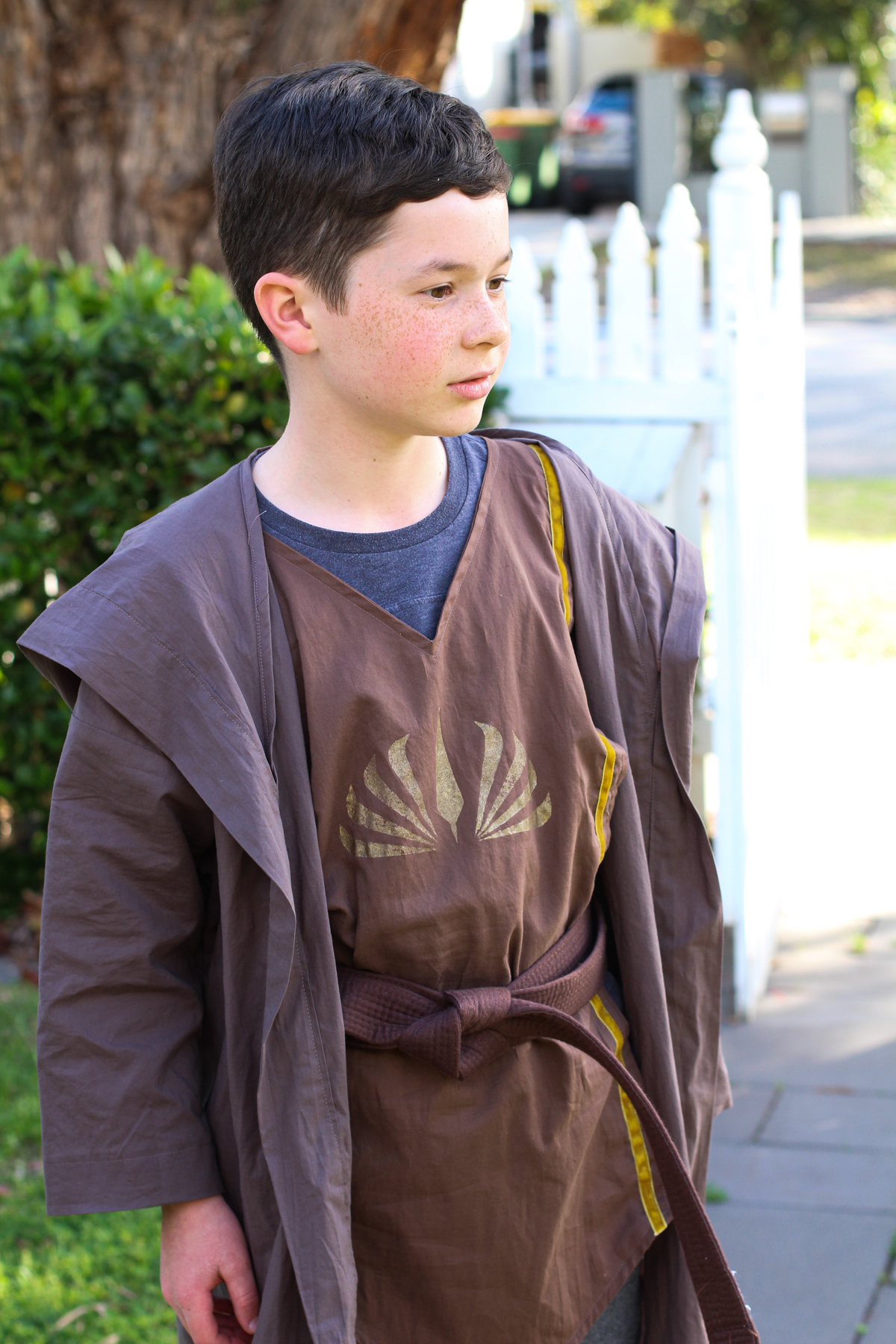 The tunic was pretty simple. We just cut a long rectangle with a hole in the middle for his head. Once we got it over his head we then cut the angle of the hem and the v neck to his liking, and then i cut a 2nd rectangle and bagged the whole thing out. To keep it in place we sewed a strip of elastic at each side joining the front to the back. Unfortunately, I didn’t get a photo of that, but it’s a similar idea to what I did for his Knight costume a few years ago. 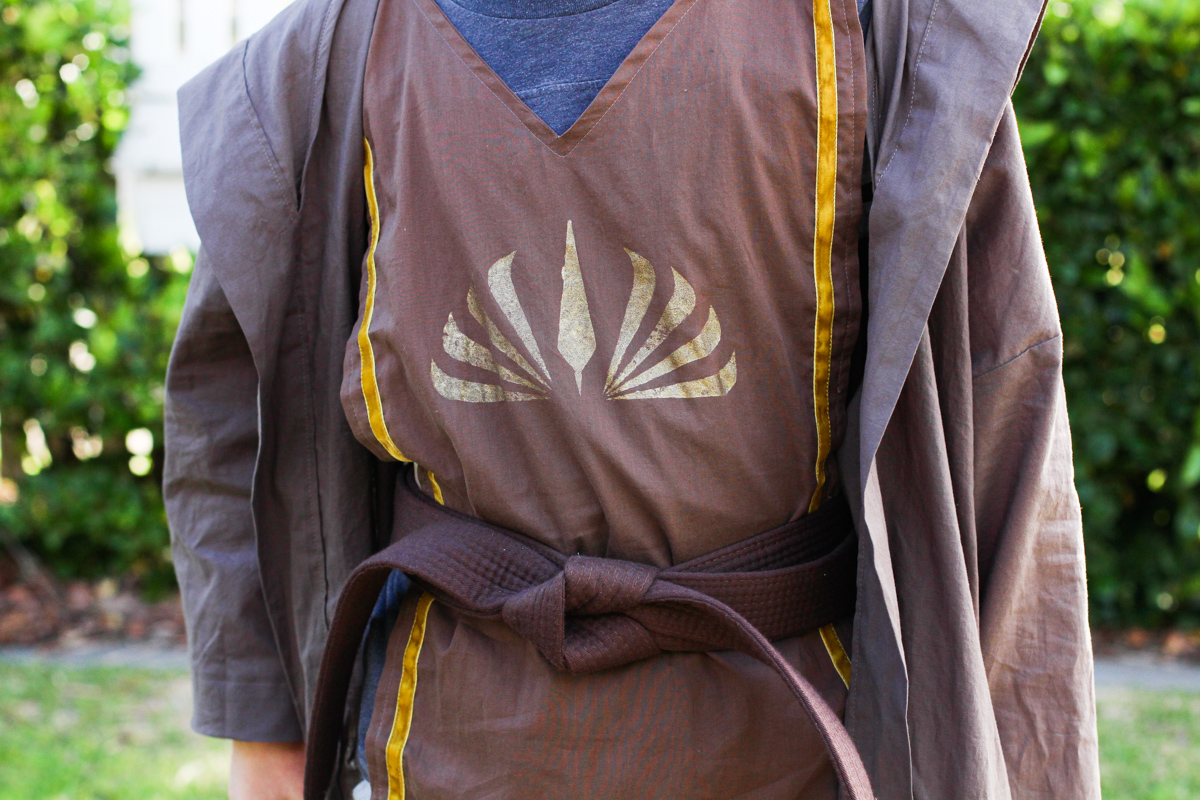 I had some velvet trim in my stash which i bought a few years ago and just never really figure out what to use it for! I just topstitched that along both sides from front to back.

For the emblem Buddy wasn’t super keen on the crotch height positioning of the concept art, and asked for it on his chest instead. And honestly, i agree, it was a good call. I think it looks much better there. We wanted the emblem to be a bit dull, worn looking, and too “brand new” so i created a stencil and used gold fabric paint and a sponge brush to create the look. I really like how subtle it is!

I got pretty lucky with the belt, tee and pants. I was planning on making them all based on the concept art, but Buddy really surprised me by pulling out a pair of grey track pants and a grey tee, and declaring he really wanted to use his Taekwondo brown belt instead. Can’t tell you how happy i was with that idea! I like that it’s a bit more casual than the concept art, and to me has a more classic Star Wars feel. Good job Buddy!

Buddy is really great at pulling things out of his own wardrobe for costumes (see: The Robin Hood Costume) and I must admit after sewing Birdie’s Paddington costume, and making the cloak and tunic for this jedi costume I was pretty tired and relieved/grateful that he had other ideas! 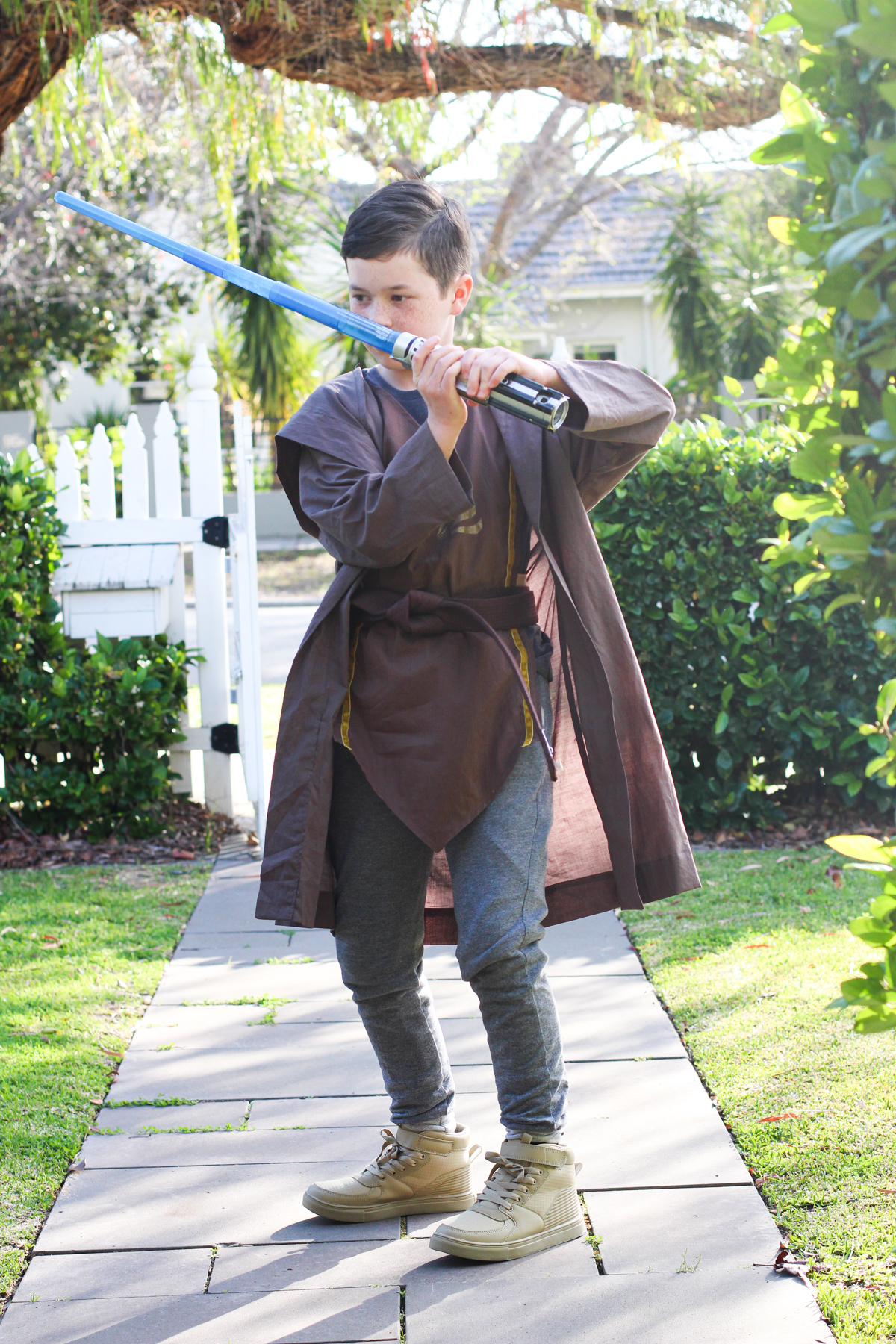 For the final elements, the shoes and light saber, here I admit I did go out and buy them. I don’t love going out and buying props for costumes, but knowing Bud’s love of Star Wars I knew the lightsaber would be enjoyed and used a lot. The sneakers have actually become his favourite casual kicks, so i’m pretty happy with how that turned out! 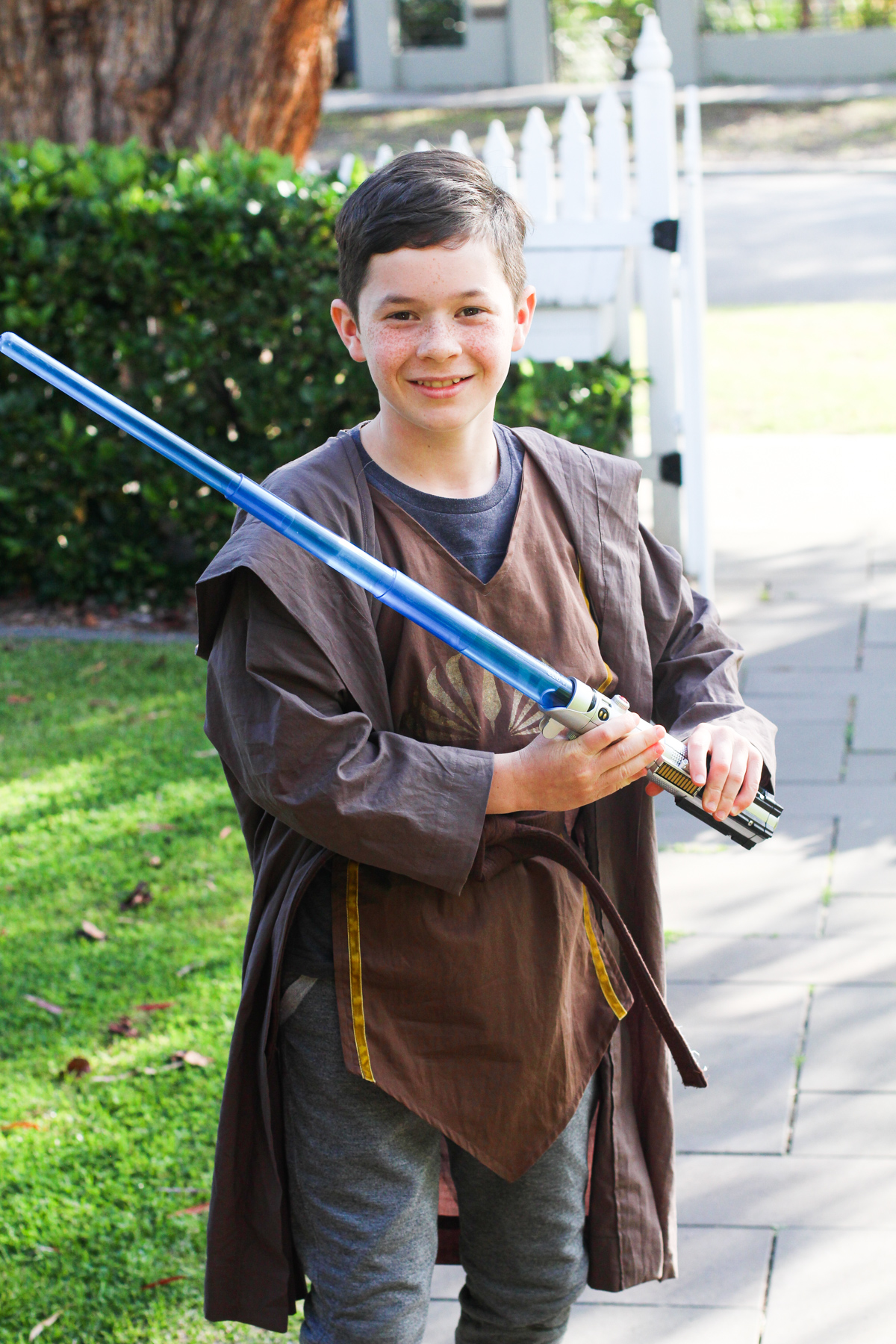 So my friends, that is the making of Buddy’s favourite costume ever! He was so happy and declared it was the best Book Week ever. I can’t stop laughing over the fact that he finally found a way to be a jedi and stick with my “it must be a book” Book Week rules. I’m so mean hehe. But honestly, I enjoyed making it for him so much and am crossing my fingers there will be Book Week in highschool next year!

If you’d like to see some of Buddy’s past costumes:

As Seen On: The Clothes Horse 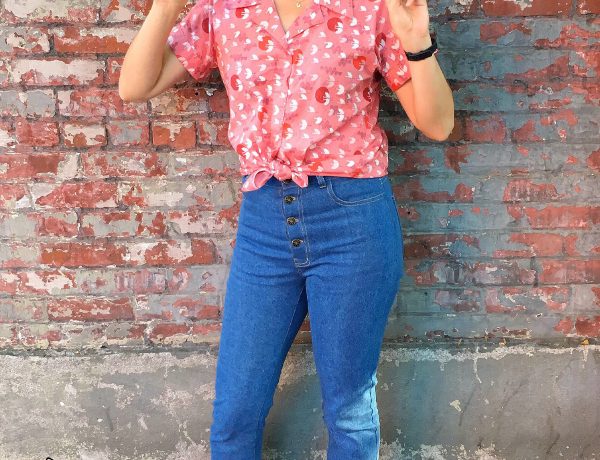 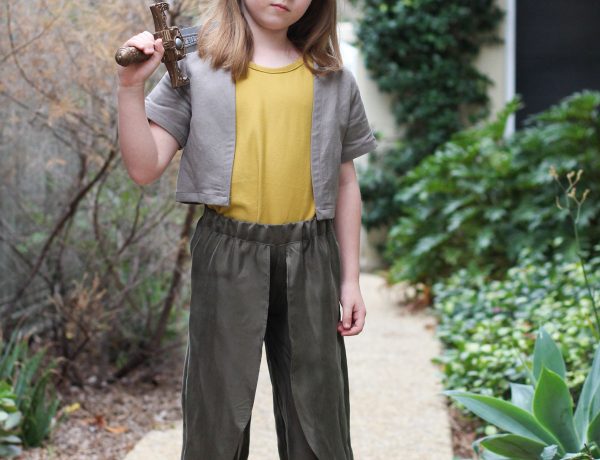 This is such fun. Love your costumes (followed all the links back). Your son is cool in his outfits and role play.