Behind The Scenes / From The Workroom / Inspiration / Sewing Community

Sewing Community Project: Behind The Scenes 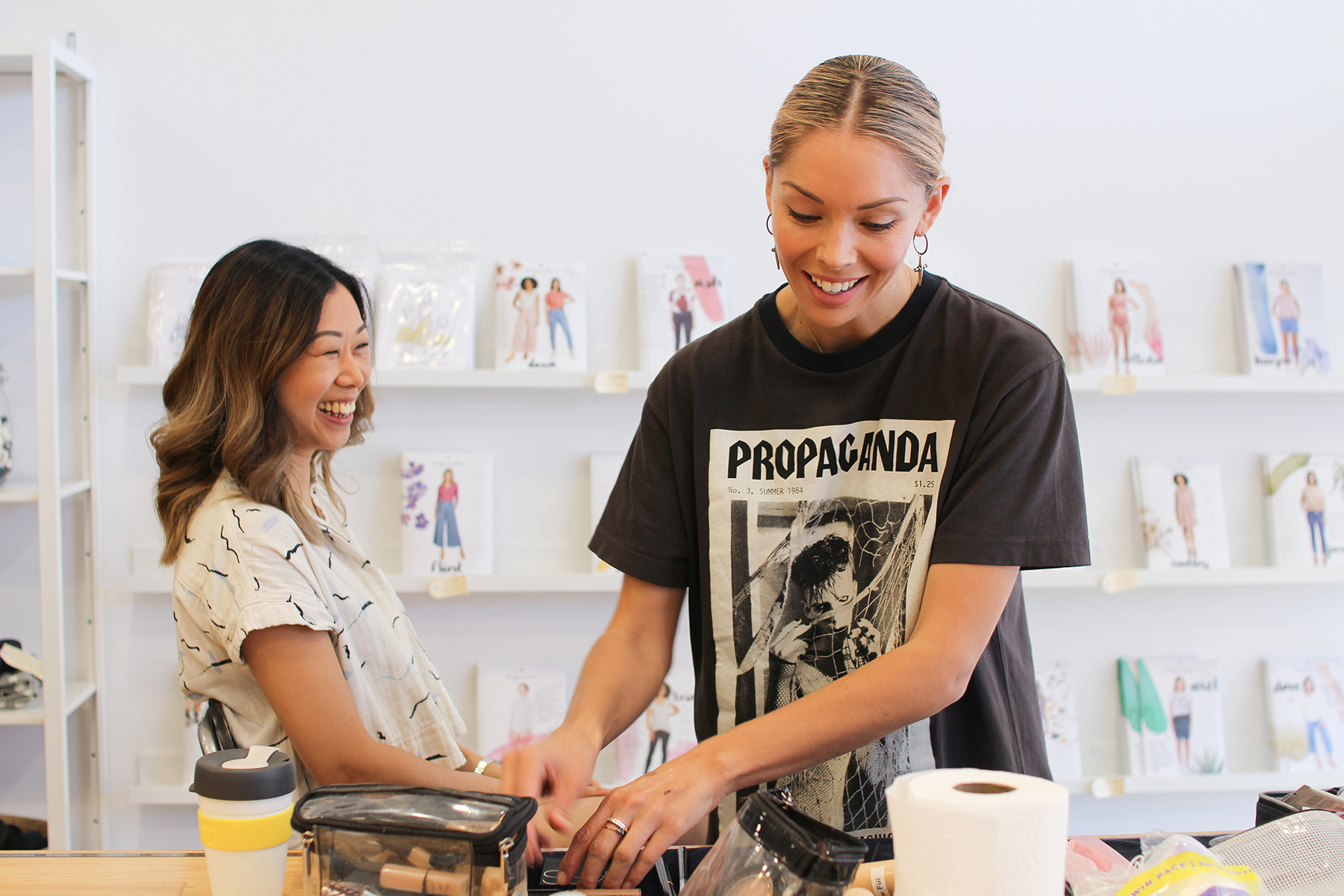 Hey everyone, Naomi here! Is it just me, or has everyone else’s sense of time gone out the window this year? I could have sworn that it was just last month we had the Sewing Community Project makers in the studio, excitedly picking out patterns and fabric, then on shoot day getting their makeup done! But at the same time, it also feels like a lifetime ago. A LOT has changed since then. One thing that hasn’t changed though is how incredibly important it is to maintain and nurture our communities! Which is what got me reminiscing about our wonderful community project in the first place.

I know you all enjoyed the beautiful photos that our photographer Bronnie Joel took, and the wonderful interviews with each of the brilliant makers (check out the links at the end if you haven’t had a chance to read them yet!). However, something you folks haven’t seen much of is the behind the scenes! So, I thought today I’d tell you a little more about what went into the project! 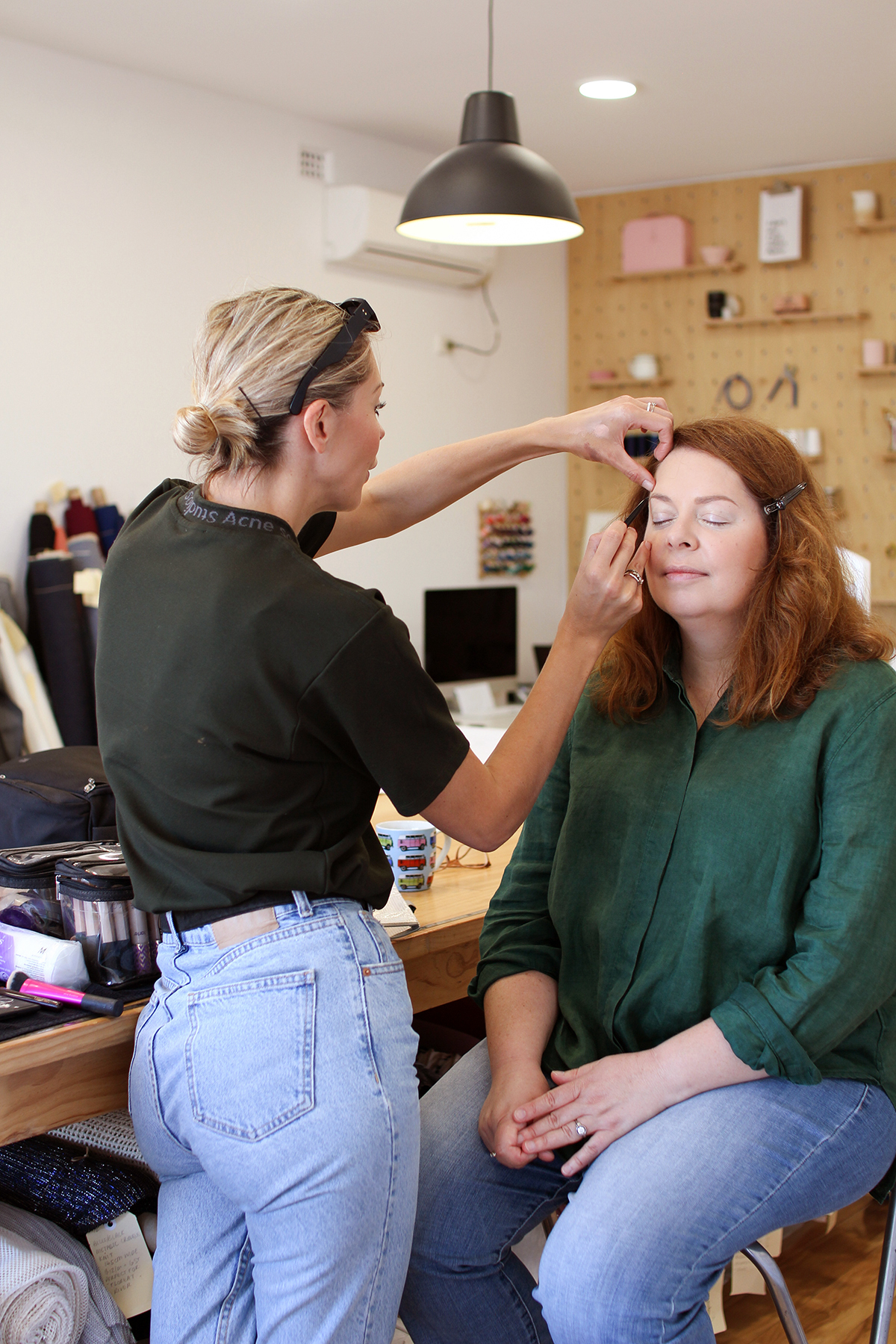 As you know, this project had been a dream of Meg’s for a fair while! She had put so much time and thought into the idea, by the time she gave me the run down…the stars had aligned and everything came together quickly!  We contacted each of the ladies, and the general consensus was a resounding yes! Within the week, I was already having them drop by the studio, ready to pick out their patterns and the fabric to go with them.

Some of the ladies came in, ideas already dreamed up, ready to rumble. Others came in excitedly open, looking for inspiration. Chatting with all of the ladies and getting to know them a little better was an absolute pleasure! One of my favourite parts of my job is getting to meet people, learning a bit about their lives, and being a part of that initial project planning. Helping someone find something that’s perfect for them is so incredibly satisfying! I think just knowing a little about that person and what it is that excites and motivates them, helps me do that even better. Plus, I just love chatting with lovely people!

Everyone has a different decision-making process when they’re starting a new make, and I find it fascinating to watch and be a part of. Some people find the fabric first and are inspired by that, others are drawn first to the design and like to pick the fabric later. And then there’s those who wander back and forth between the pattern shelf, the garment samples we have in the studio, and the crates of fabric, in a wonderful state of creative flux. We talked a lot about what they usually like to sew and wear, all of their current projects, and what would fit well into their wardrobes. It’s always a fine line to walk between making something you know you’ll get a lot of use out of, and trying something new – to experiment with fabrics, styles, and different sewing techniques. At the end of the day though, there was just one rule – you’ve got to love it. 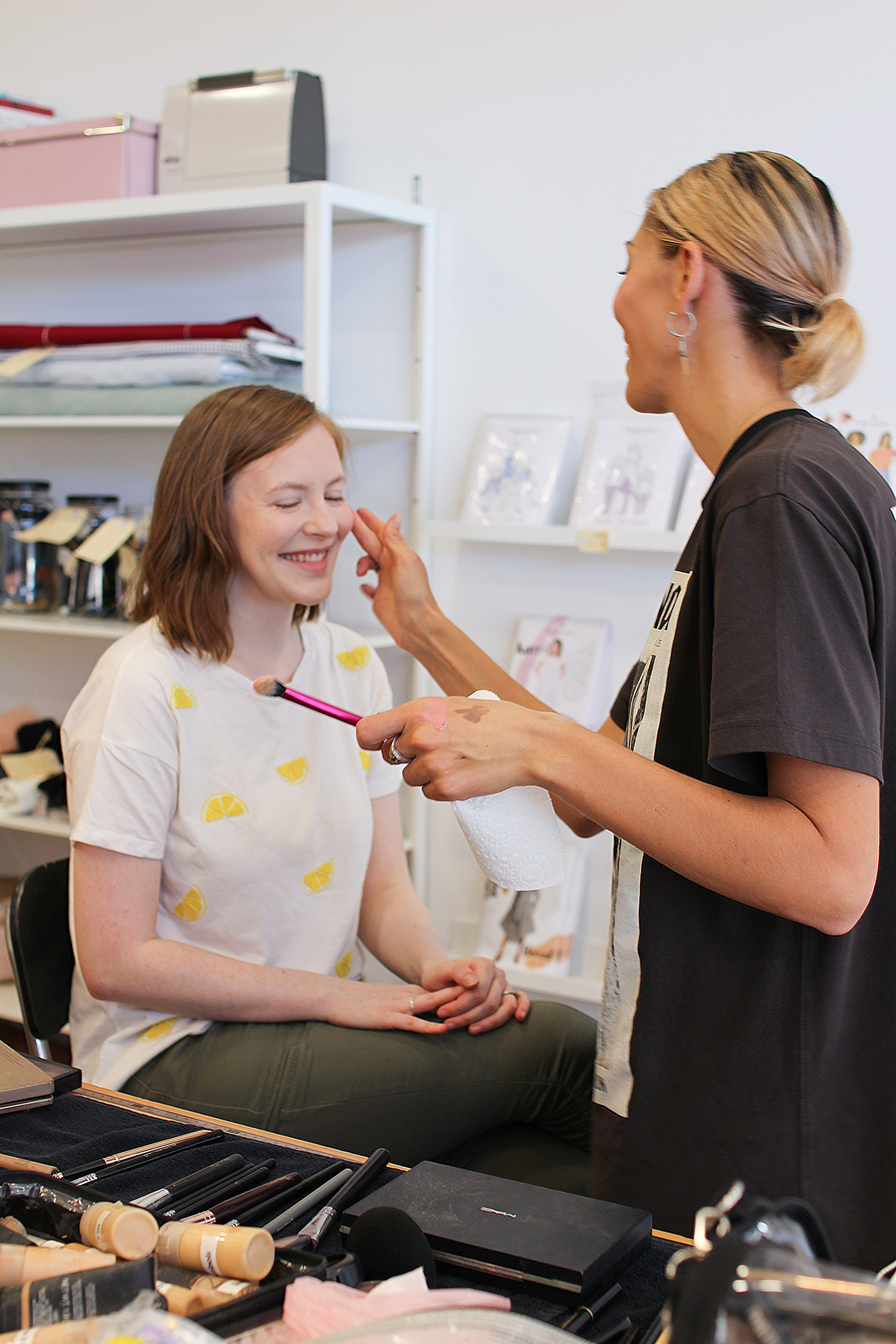 Roz visited on my day off, so she chatted to Meg while making her selections, but I got the opportunity to chat with Sophie, April, Sue and Julia individually when they came in. Most of them had a vision already and were looking for fabrics to complete their picture, and of course they settled on beautiful ones!

I was super excited for Sophie to have a go at sewing the silk satin which she hadn’t tried before, and her Flint shorts with Arrow Mountain Buttons (although we did forget buttons the first time she visited and she had to come back, whoops).

April came with some inspiration pics of relaxed gathered waist dresses and it didn’t take long to settle on Darling Ranges as the best pattern to create the look she was going for. Paired with the Seaweed linen and shell buttons, it sounded like a sea-side holiday dream dress, which I was in love with already.

When Julia dropped by, she instantly filled the studio with her lovely positivity and sunshine! Her heart was set on a pair of white Dawn jeans, which had been on her make list for quite a while, which she paired with the Banksia blouse after she discovered a gorgeous satin print that had been hiding at the back of the fabric crate.

Sue was guided more by fabric, and she fell in love with remnants of a print we had from a local designer. We had the print in both a sand washed silk, as well as a tencel, which is what Sue had originally spotted and envisaged for her Tania culottes. Unfortunately, there wasn’t quite enough (alas!), which prompted the new idea of the bronze linen for the Tania’s and the silk for a Floreat top. I was so in love with the final combination though, that I feel like not having enough of the tencel was just meant to be! 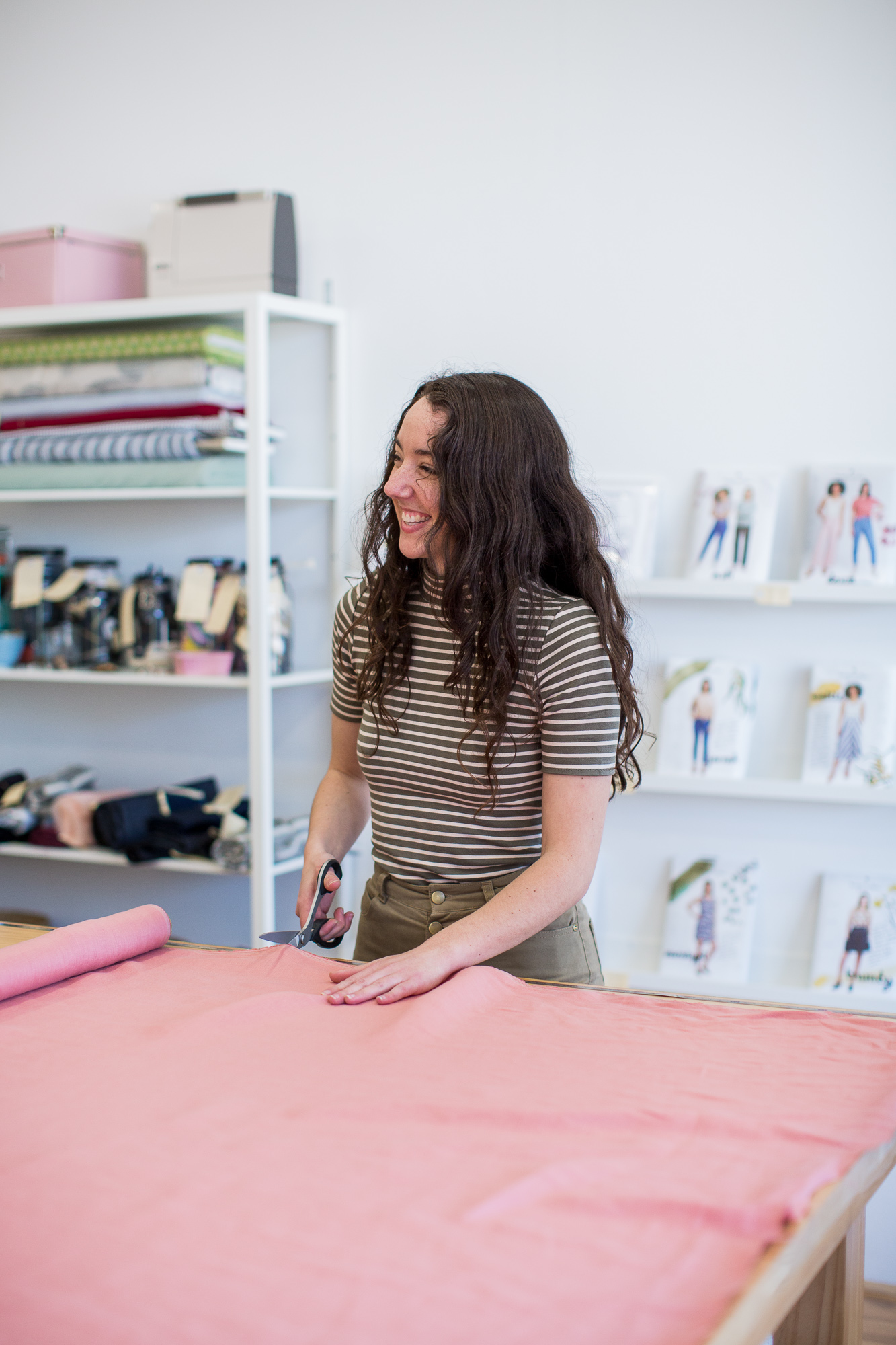 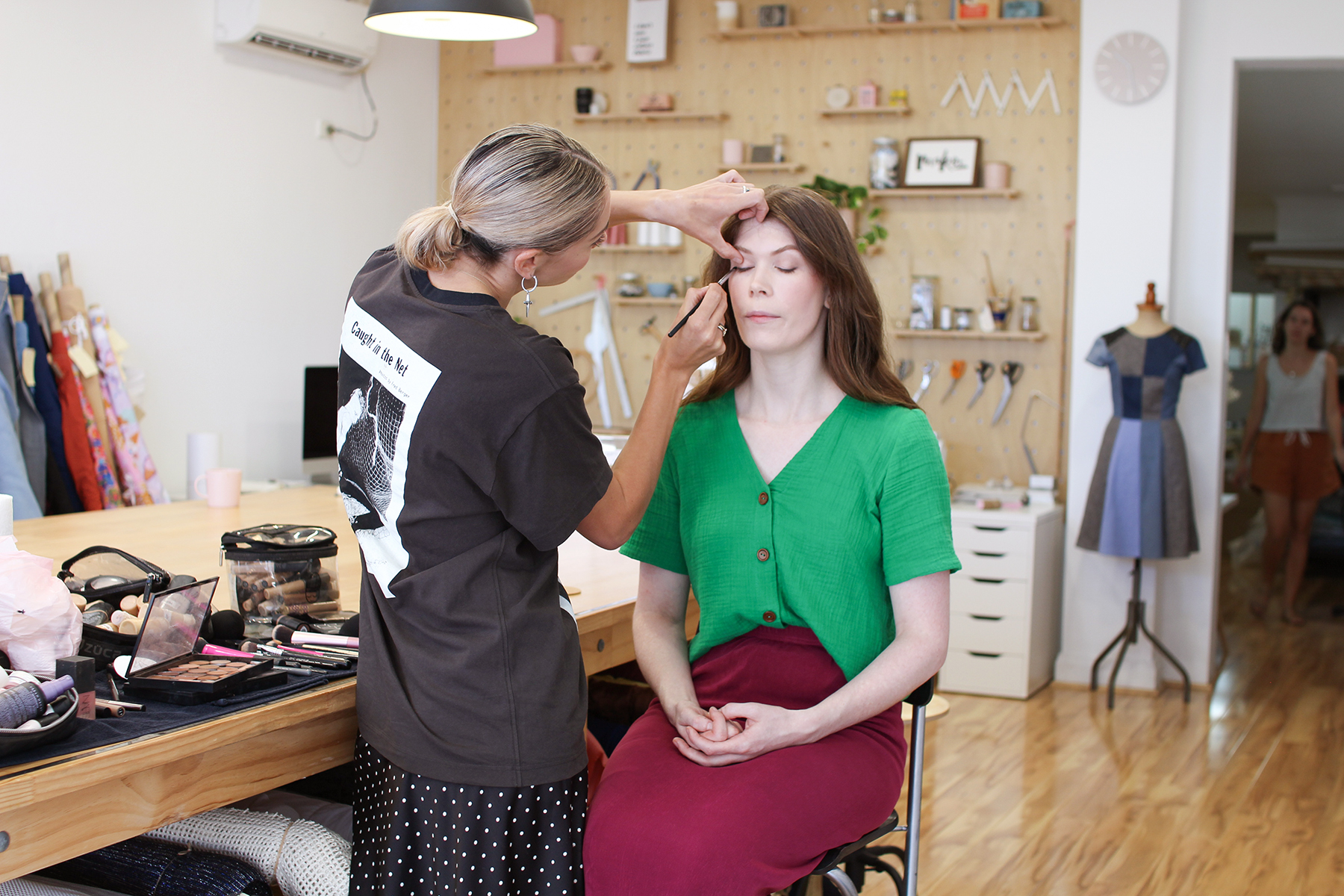 Then on one particularly busy Saturday morning, I had the remaining ladies come in. Only Deepti and Alice had coordinated their visit, but somehow a telepathic message had been sent out to Bree, Eleanor and Hilda, who all ended up in the studio almost at the same time. It was wonderful chaos! There was a lot of chatting and catching up, a lot of laughing and running around as they tried on samples, examined patterns, searched through fabric and deliberated on final decisions.

Deepti had ideas galore and tried on just about every sample, but she was so much fun I didn’t mind ;)

Alice loved how the wide leg Dawn sample looked on her (and rightfully so, she looked incredible!), and then fell in love with the River top and the mulberry cupro.

Bree looked amazinggg in the Darling Ranges top sample, so much so that she ended up getting a bit of the grey crinkle linen it was made in for a potential future version! But she decided on her “dress like a crayon” colour combo of the masala linen and an awesome deep red recycled denim for her Dawn jeans.

Eleanor was originally thinking about a Matilda in black, which would have been great, but didn’t find a fabric that grabbed her, so she swapped to her Dawn/Sudley combo because she felt like she’d get a lot of wear out of those.

And then finally Hilda came in, with her wonderful Darling Ranges plans! She originally got some of a brushed cotton/viscose check, but later decided on the natural linen, which ended up going beautifully with a lovely belt buckle she’d sourced. And that was it! Everyone had patterns, buttons, fabric, rivets and all the bits – ready to start sewing! 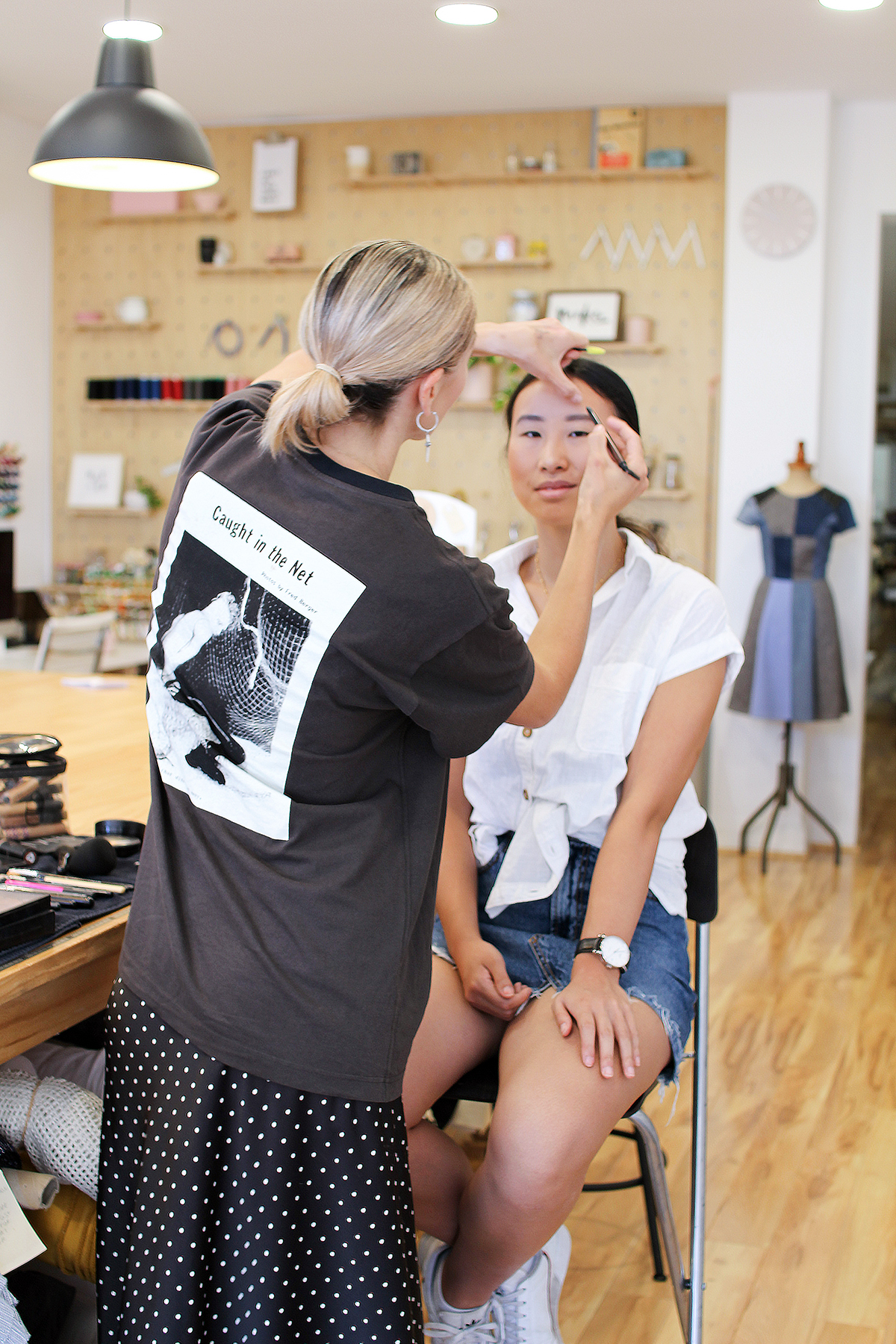 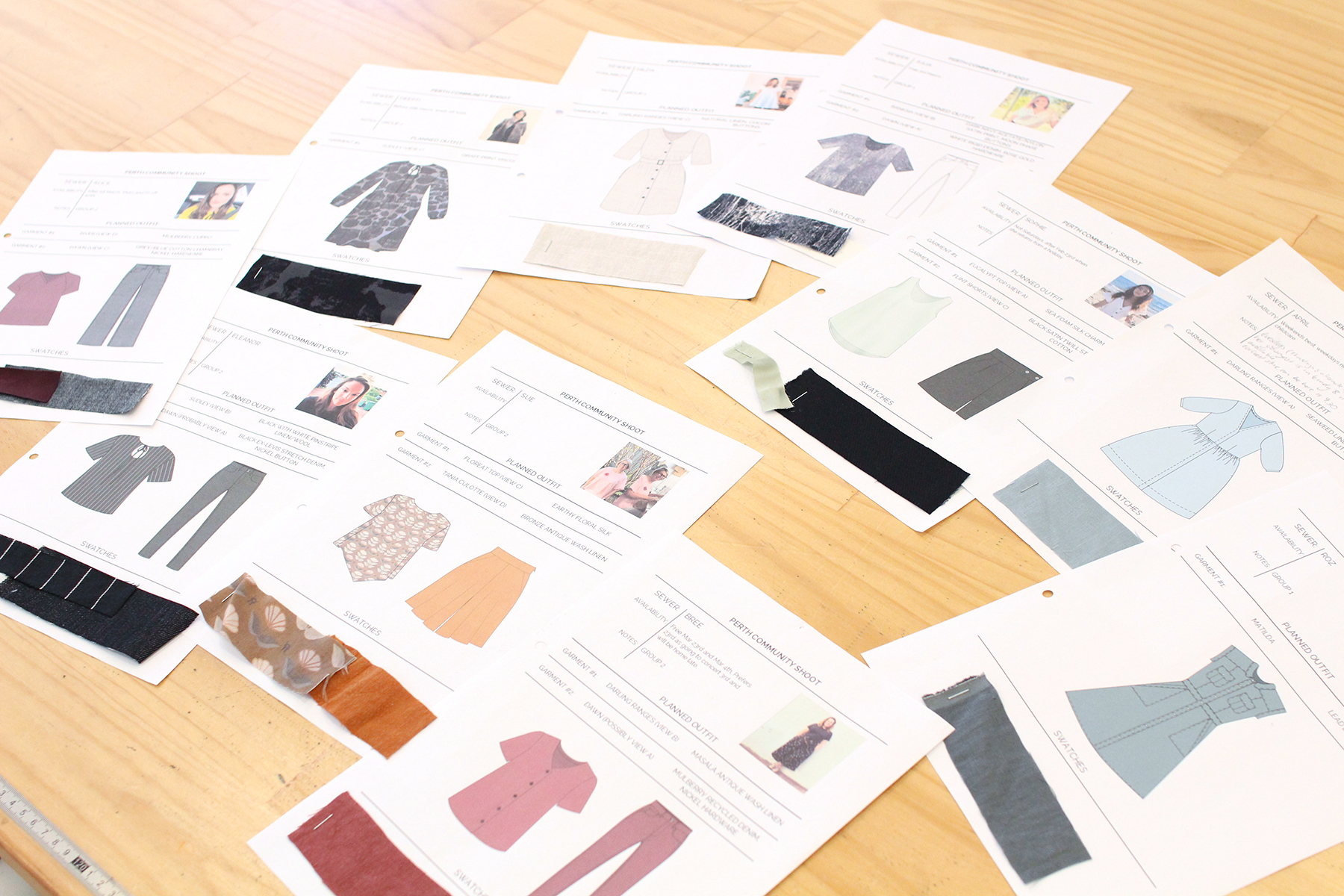 To keep track of what everyone had decided to create, I made up style sheets and outfit mock-ups for each person. They included a photo of the maker, all the details of their makes, swatches of each of their fabrics, and I even got a bit excited overlaying the prints and fabric colours in each of their illustrations. What can I say, I’m a visual person, and I love a good mock-up! It was exciting to see that while all being very different, either through their choice in pattern or choice of fabric and styling, somehow it all worked out that everyone’s choices looked lovely together! 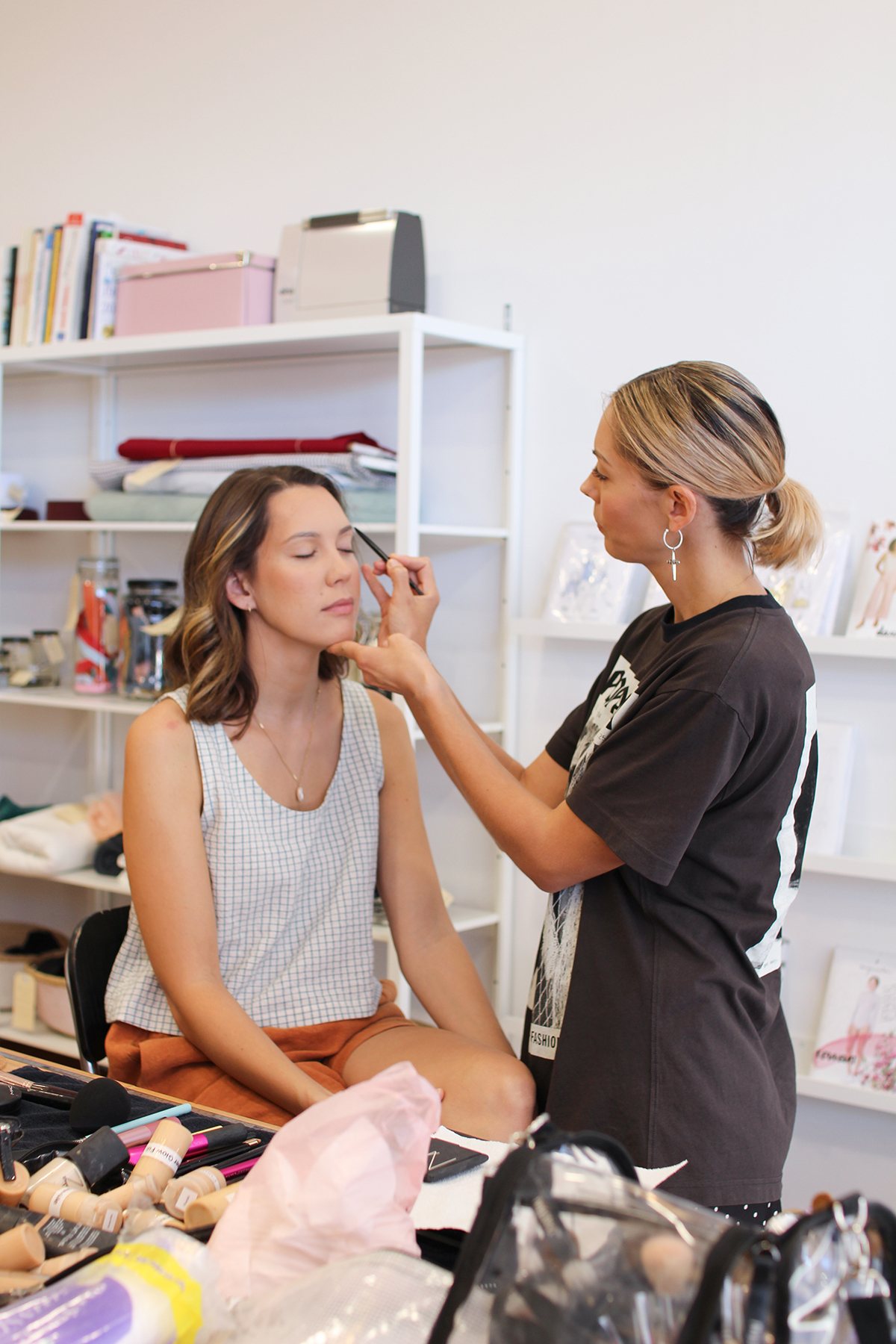 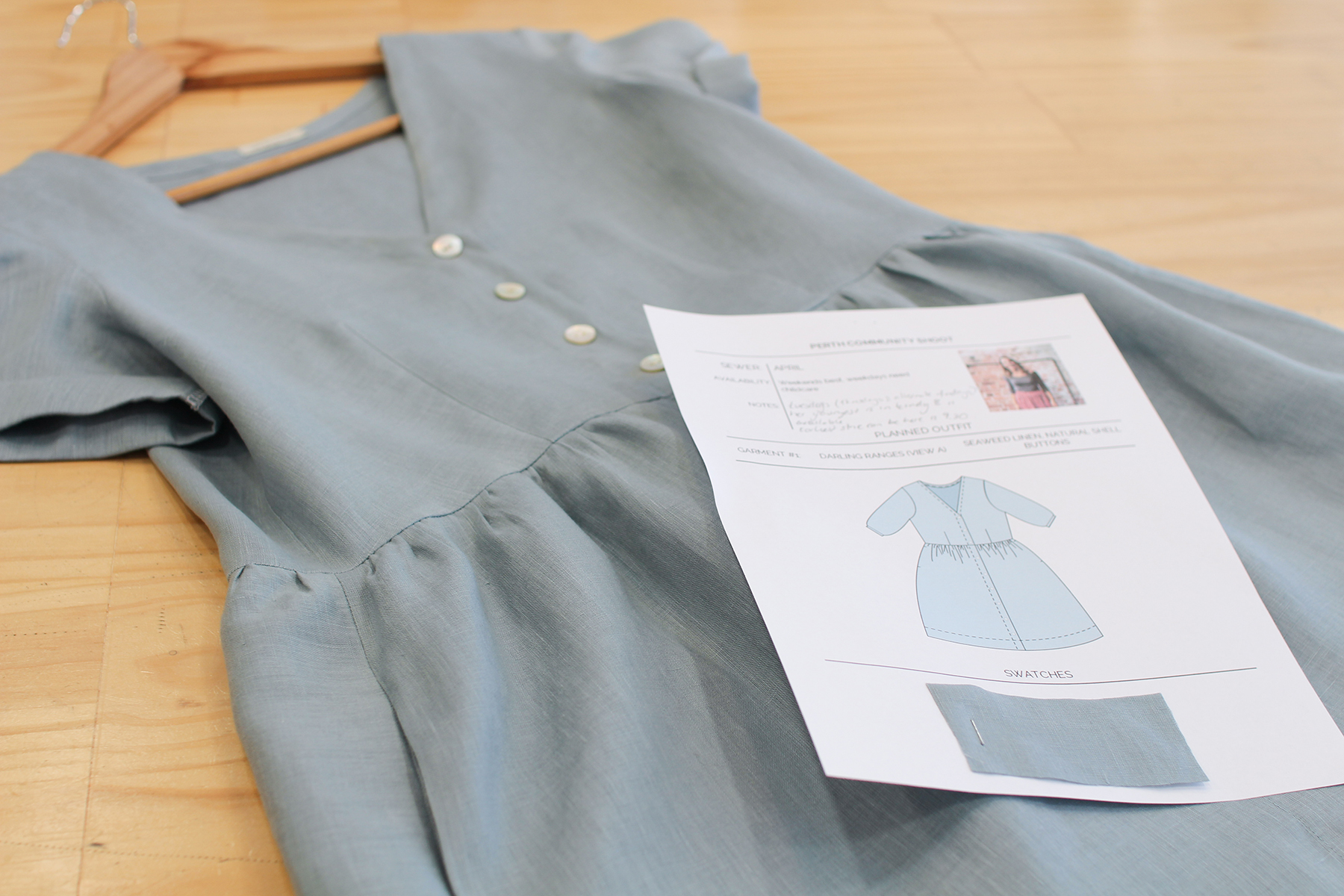 Before I knew it, it was shoot day! Each maker was scheduled at staggered times to come into the studio and get their make-up done by the lovely Courtney of TxC Collective. It was so much fun, seeing everyone’s finished projects as they came in and hearing about how they went. There were no major sewing disasters, only a little last-minute sewing, and most importantly, everyone was excited and happy with their makes – woohoo!

I’m the official ironing lady here at Megan Nielsen Patterns, so I pressed and steamed each of their outfits as they chatted, and Courtney did her thing. There was a lot of laughing and running around getting ready, and Sue may have done some sneaky shopping as she waited. Meg and Bronnie were already down at the shoot locations, so as each person finished up they were sent on their way to meet them. One by one they came and went and then suddenly the studio was quiet! I was left to eagerly await news on how the shoot went, and then over the following weeks, for the highly anticipated arrival of the final photos!

The last little bit of the project I worked on was writing up the interview questions for the makers, which was a lot of fun. Like most of the ladies, I’ve been sewing and making for a fair while, and while writing the questions I was thinking a lot about all the things I would have liked to know during my sewing journey. Alongside a wonderful Mum, great teachers, and good ol’ trial and error, a good chunk of my learning over the years has been through the little gems of knowledge and sharing of experiences, good and bad, by makers around me. I’m so grateful for those who have encouraged and nurtured me along my way, and after meeting all of the Sewing Community Project Makers, I knew they had so much enthusiasm, experience, and wisdom to share, that could do the same for others. Working on this whole project was such a joy, and has been a big reminder for me of how important and wonderful our sewing community is!

So on my final note, I’d like to say another big thank you to our wonderful makeup artist Courtney of TxC Collective, our amazing photographer Bronnie Joel and all the lovely local Perth makers that were part of our Project, and who I had the pleasure of meeting, helping and learning from! 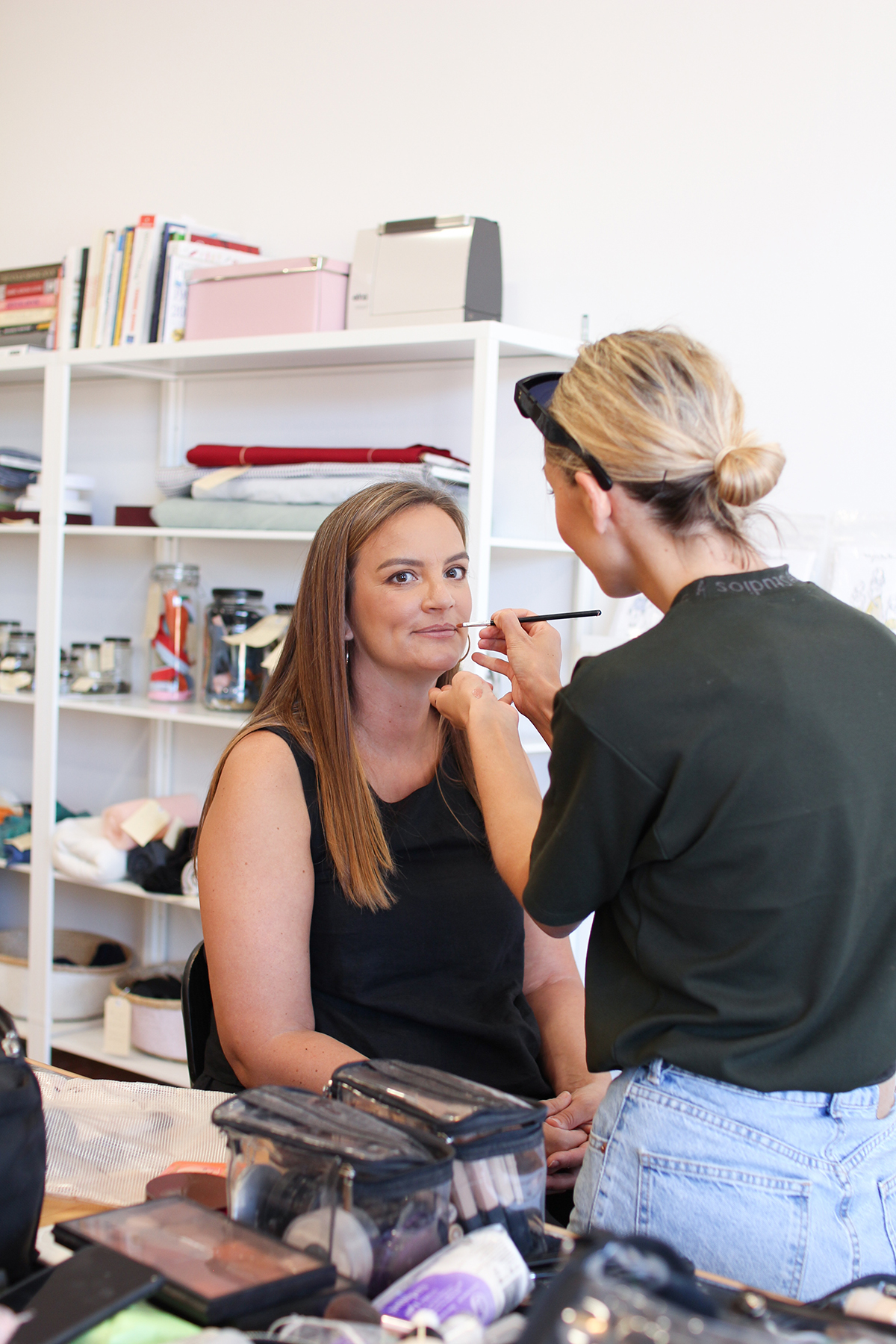 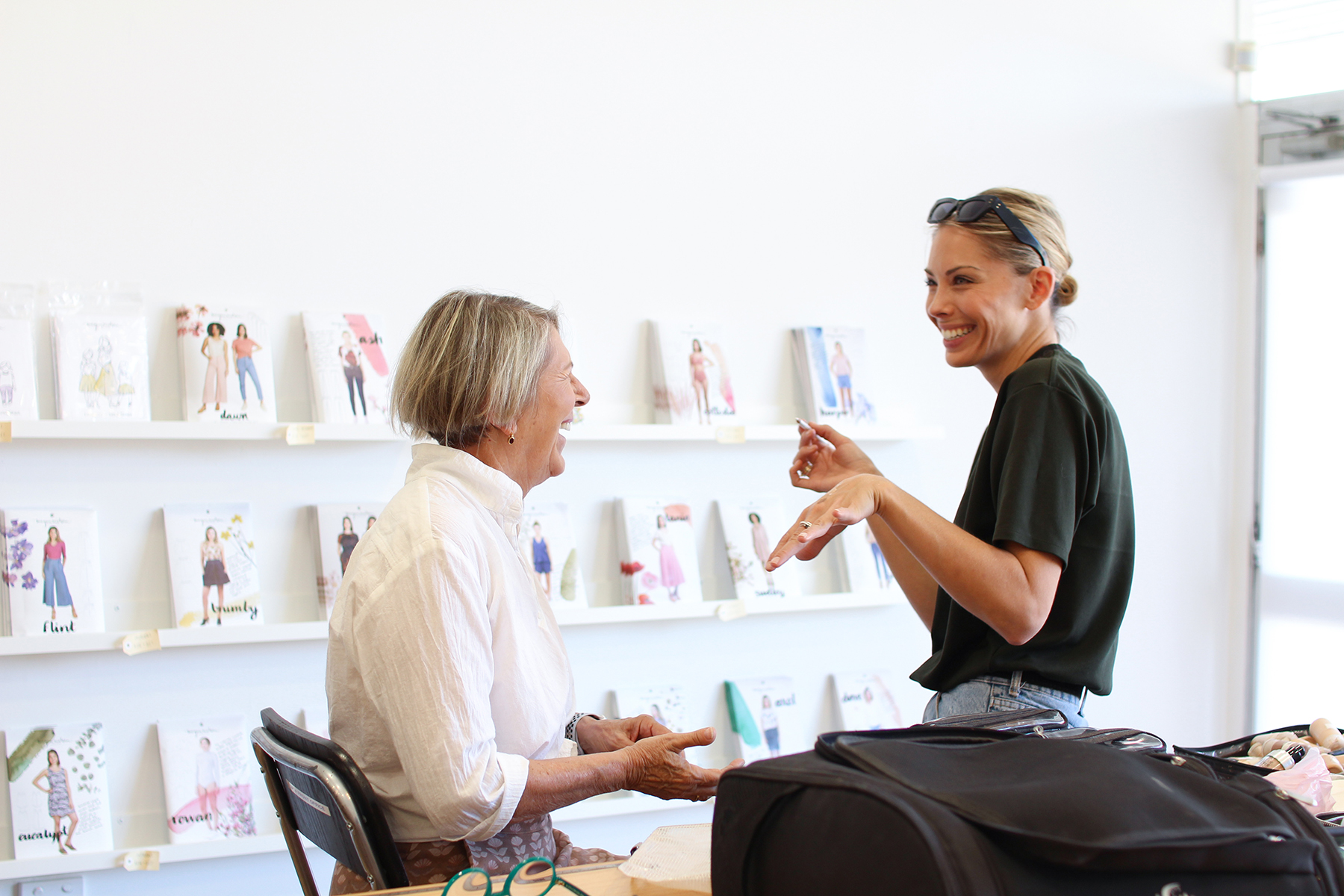 Naomi is the Design Assistant here at Megan Nielsen Patterns, and our resident helping hand. She stays busy assisting Meg with pattern development leg work, getting super excited about good instructional diagrams and making green coloured fabric suggestions for every sample we make. She’s a problem solver, a fabric addict, a serial tea-forgetter and a passionate maker. 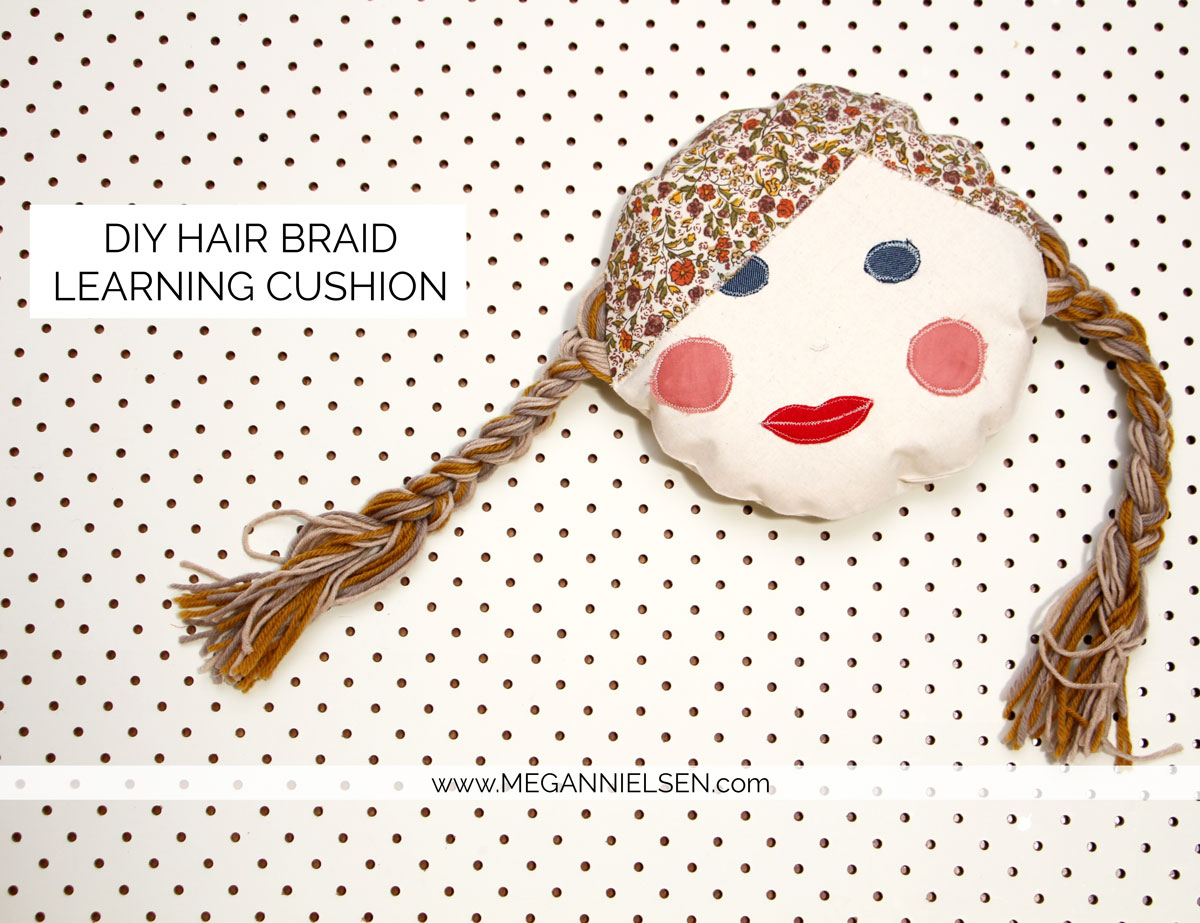 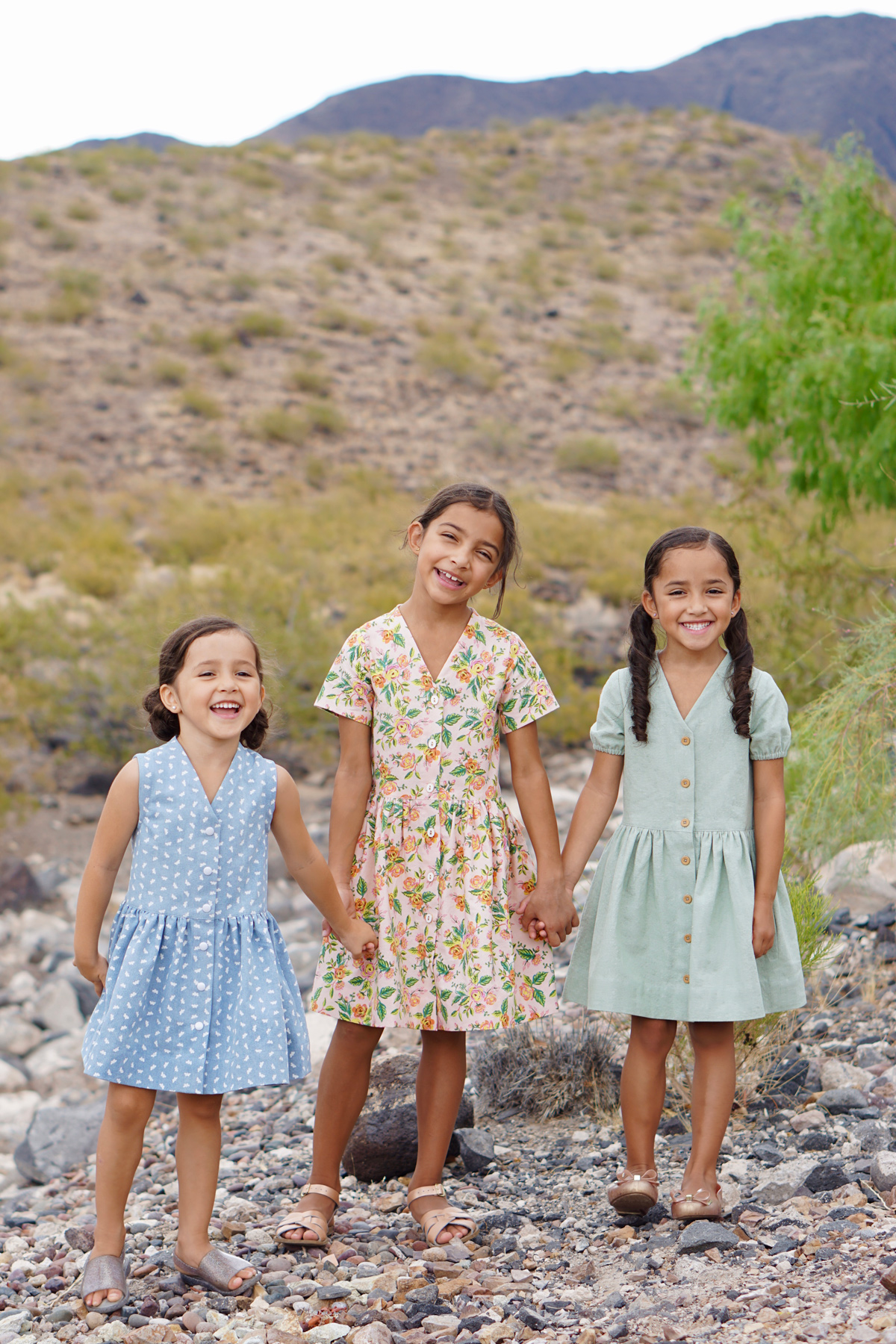 Thanks Naomi for the lovely post and detailed run down of the event. I loved reading all about it. Love to all those sewists out there!

The story of my $1 Opal Pants