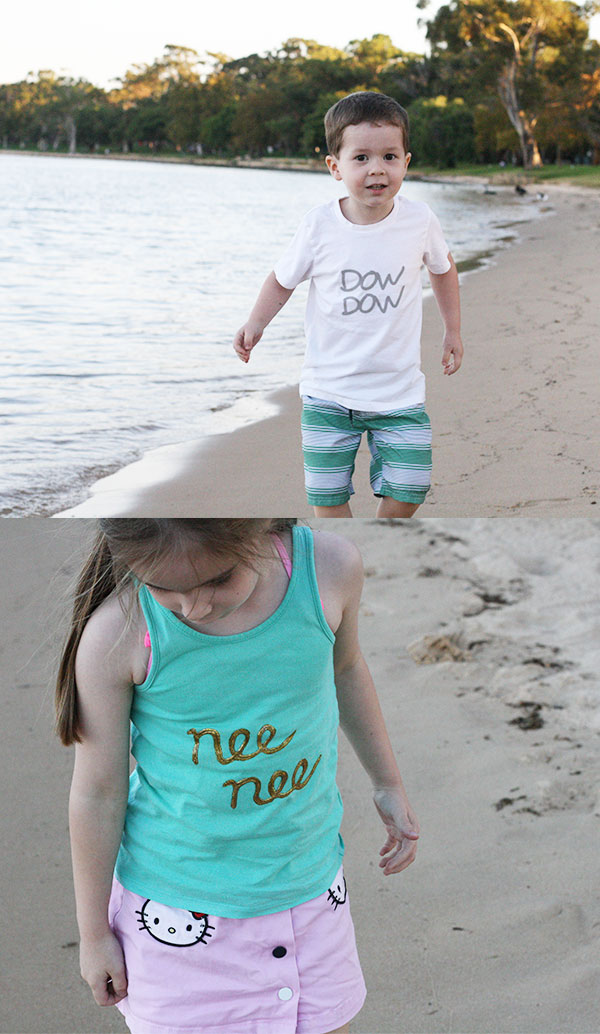 My kids have special nicknames for each other. When Bunny was very small and couldn’t say Buddy’s name, she called him “Dow Dow”, and when Buddy couldn’t say Bunny’s name he called her “Nee Nee”. It’s become so much a part of them that the names stuck, and little Buddy introduces himself as Dow Dow and refuses to call Bunny by her name even though he can say it. Even Chris and i find ourselves calling them by these cute little nicknames.

I love it so much that for over a year now i’ve been wanting to make them matching tshirts with their little nicknames on. But as per usual, i got stalled because i overcomplicated the project. I’m a designer, so of course i HAVE TO make the shirts, in fact i have to design a completely new style for their shirts, then i HAVE TO design something cool to go with their names because a name on it’s on is not enough, the fabrics must be astoundingly awesome etc etc to the point where i can’t pull the trigger. But you know, sometimes it’s just better to keep things simple. So instead of all my grand plans, i used pre-existing blank H&M tshirts and simply put their nicknames on the front in my own handwriting. And just like that a years worth of procrastination was over. 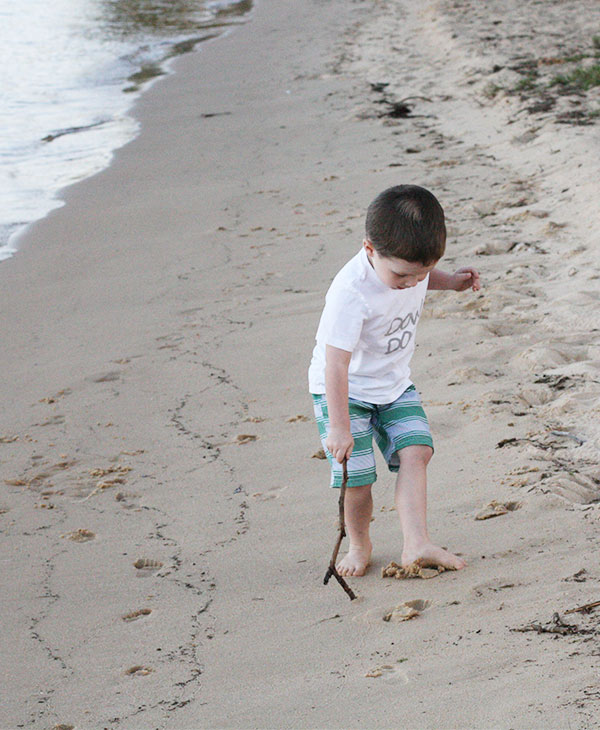 For Buddy’s i used my new Silhouette Cameo + their fusible applique fabric and ironed it on – and for Bunny i just cracked out a bottle of fabric glitter glue and got writing. And it’s funny, for all this simplicity and instant gratification these shirts still got a “WOW thank you mommy!!!” and a huge cuddle. Lesson learned :)

So before they grow up too much and stop using their special toddler names for each other, here are Dow Dow and Nee Nee in their matching shirts, doing their favourite thing, playing at the riverside and being generally awesome. 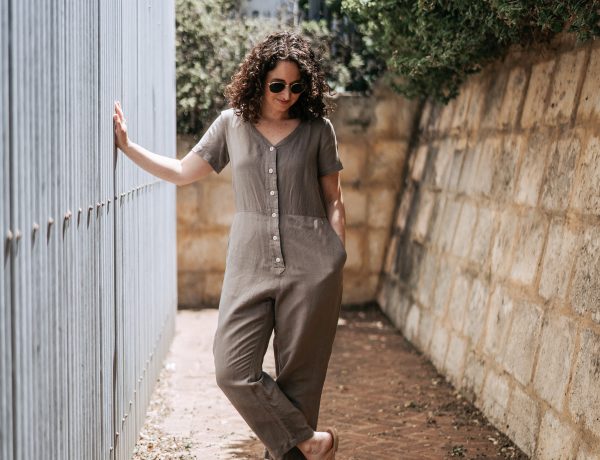 An unhealthy obsession with Mushroom Linen 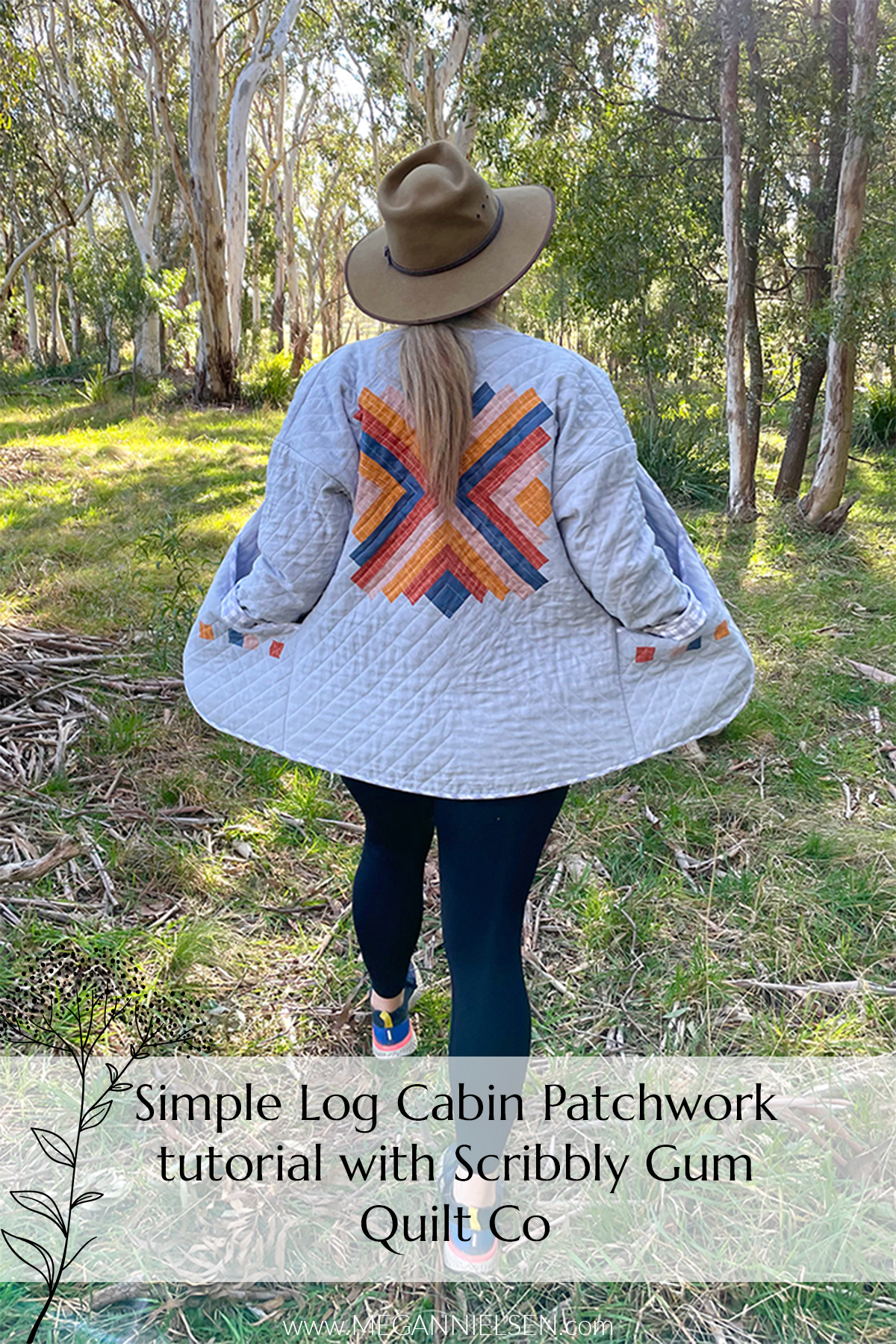 That’s so adorable! Kids are funny with their naming. My baby brother had no problem saying my name, which the rest of the adult world can’t pronounce, yet he couldn’t say ‘Caitlin’ (my sister’s name). He called her ‘Deanen’ instead!

OH that’s so cute!! I’m so impressed! You have such a pretty name, it must drive you crazy to hear it pronounced weirdly. I’ve heard some pretty hilarious attempts at pronouncing Siobhan, the best of which was a literal sounding out of each letter – which is of course, completely wrong hehehe

I honestly just love all the words kids make up for things. We actually call strawberries “tubbies” in our house because that’s what my hubby called them as a kid, and somehow we’ve just adopted it hehehe

These two were crazy cute before this story, but the nicknames make them IMPOSSIBLY cute!

Awww thanks Sonja!! You are always such a sweetheart :) They totally melt me with the cute things they say

Isn’t it amazing how easy life can be when we cut ourselves some slack!

Lovely kids, and a such a cute idea for quick presents!

Thanks hun! Honestly, its a real lesson to me to simplify more often, and stop being so hard on myself :)

Everything about this post is just lovely :-) Uncomplications and ADORABLE kids for the win!

Thanks Jo! I really need to learn to do little things like this more often, and stop overcomplicating everything! xoxo

I can’t believe how much they’ve grown up!! Super cute nicknames