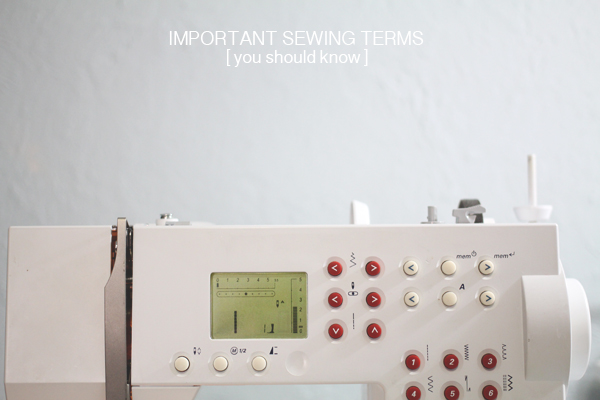 apex – The highest point of a rounded figure, such as the bust. On the bust, it is also referred to as the Bust Point, and is the pivot point for dart manipulation.

armsyce – Another term for the shape of the armhole of a garment.  (Pronounced arms-eye)

backstitch – A few reverse stitches at the beginning and end of each stitch line, meant to prevent the stitch from unraveling.

baste – A temporary, long stitch meant to hold fabric in place. It’s also used to create gathers. It can be done by hand, or by machine using the longest stitch length.

bias – A diagonal angle to the edge (selvage) of a fabric. A true bias is 45 degrees to the selvage, and provides the most stretch and drape.

binding – A strip of fabric, usually cut on the bias, used to finish seams and raw edges.

clipping – Cutting into the seam allowance perpendicular to the seam, without actually cutting the seam itself. This allows curved edges to lay flat and smooth.

dart – A folded and stitched wedge of fabric. Used to create fullness in areas such as the bust or hips.

ease – The process of sewing two pieces of fabric together, when one is slightly larger than the other, without any puckers. This is most commonly done when attaching a sleeve to an armhole.

facing – A piece of fabric used to finish and enclose a raw edge of a garment, such as a neckline or armhole.

gathering – Also known as ruching, is the technique of  bunching up, or gathering, the edge of a fabric to create a ruffle or fullness in a garment. This is usually done by sewing one or two lines of basting stitches, and then pulling the threads to create the gather.

grain – The direction of threads in a woven garment. The lengthwise grain is parallel to the selvage, or edge, of the fabric. The grainline on a pattern must be lined up with the grain of the fabric, or your garment will be cut off-grain and will not lay or drape correctly.

interfacing – Sewn-in or fusible fabric, attached to the inside,that adds stability to a garment. Often used in collars and plackets to reinforce and add body. There are many different types of interfacing depending on the type of fabric you are using.

overlock/serger – A specialized machine that cuts, sews the seam and encloses the edge of the fabric with a series of looped threads all in one step. It utilized multiple needles and spools of thread, and can be used to sew seams, or finish a seam edge. It is also commonly used in knits, because it provides ample amount of stretch.

placket – A finished and overlapping opening  in a garment. Usually holds the buttons and buttonholes, or another  closure.

selvage – The tightly woven edge of a fabric that runs parallel to the lengthwise grain.

staystitch – A line of stitches on a single layer of fabric, most often on a curve, meant to prevent stretching and distortion during the assembly process. ( a sandard staystich line is 1/8″ away from your seam line. So if your final seam allowance is 5/8″ your stay stitch should be sewn at 1/2″).

topstitch – A decorative (and sometimes functional) stitch done on the outside of a garment.

understitch – The process of sewing the seam allowance to the facing. This keeps the facing in place and prevents it from rolling to the outside. No stitches are shown from the outside of the garment. 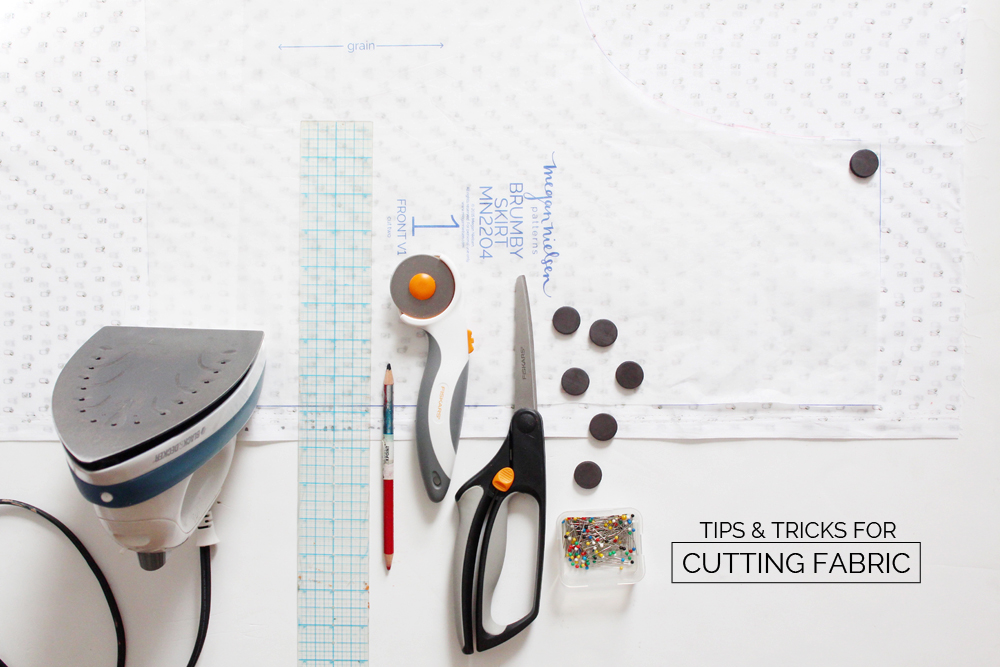 TIPS AND TRICKS FOR CUTTING FABRIC 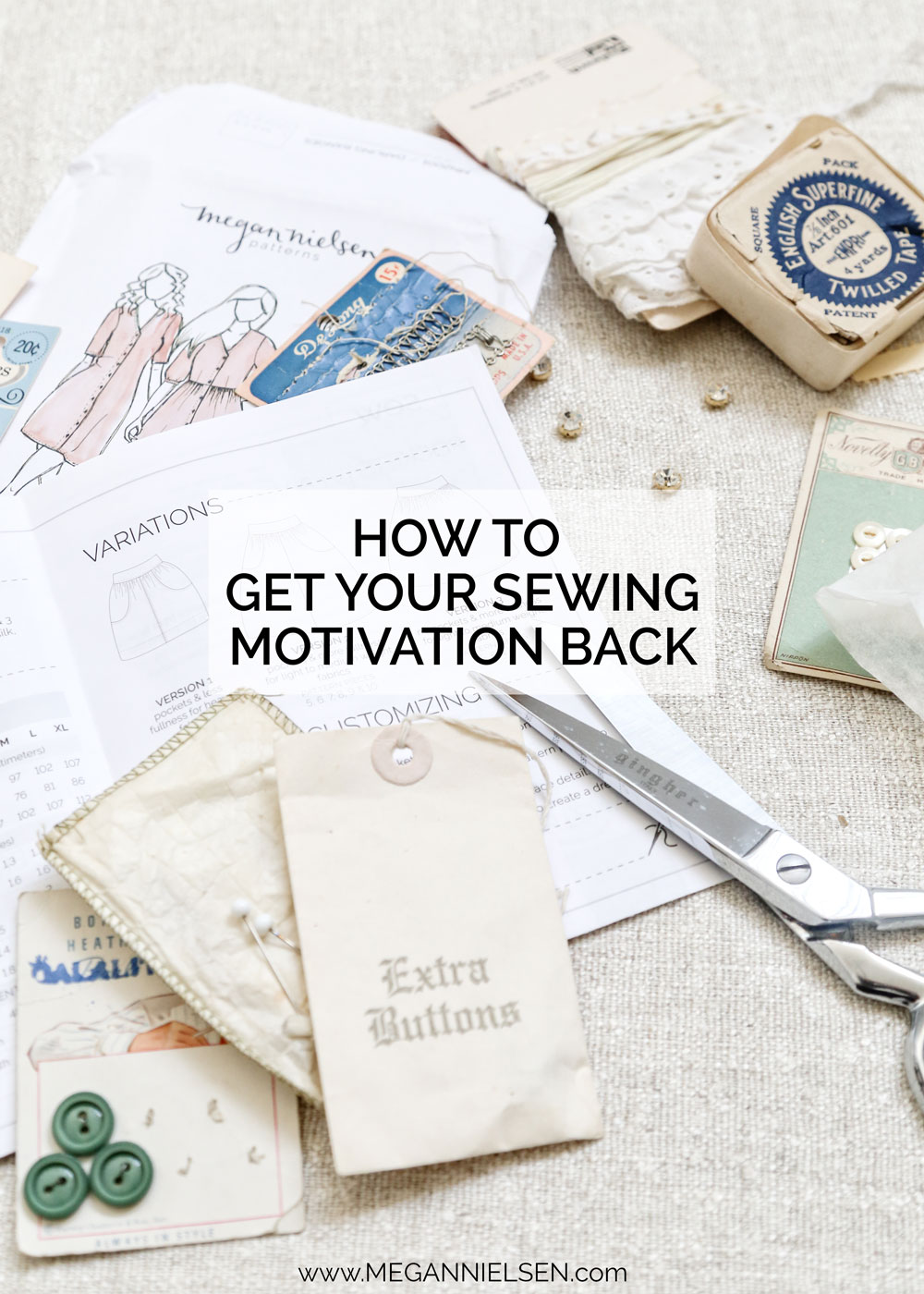 How to get your sewing motivation back

It sounds stupid but I’m kinda hoping that’s a picture of your sewing machine because I have the exact same one and it’s perfect! I absolutely love it!!

Hi! I’m new to sewing and am shopping for a machine… What type is the one that you use?

It’s a Bernina Activa 220. I absolutely love it.
This one time it just stopped working right in the middle of a seam and I was about to start crying when my boyfriend pointed out that the cat had just loosened the extension cord. I’m 26 and I would start crying for this machine, that’s how much I love it :)

oh thank goodness – I’ve heard of them all …. now, back to my sewing!

What a great list- and the pronunciation tip is great! I would love to link to this if you didn’t mind.

Hi Rachel! so lovely to hear from you! I’m so glad you enjoyed the list – Holly did a great job! More than happy for you to link to it if you’d like to :) thanks honey!
xoxo

[…] Grain is very important! Before you cut out your pattern pieces, spend plenty of time prepping your fabric. That means pre-washing, ironing (if necessary), and laying out the fabric perfectly straight. Most of the time, you’ll probably be doubling over your fabric and cutting some pieces on the fold. So make sure you bring selvage edge to selvage edge and line them up perfectly. […]