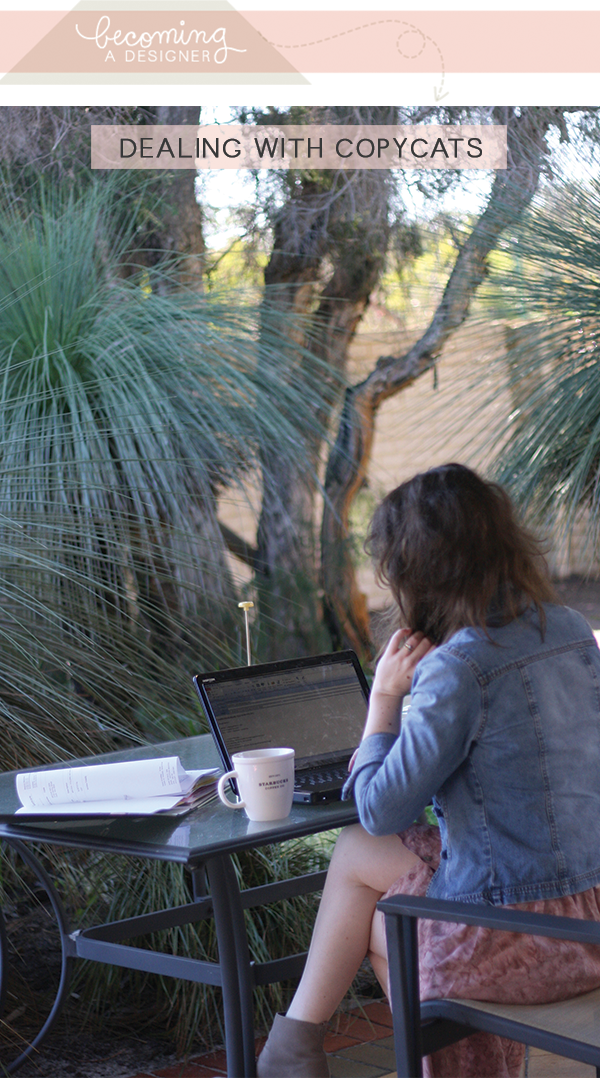 They are everywhere, and it can seem frustrating. I’ve had so many designer friends complain about this – and seen some talented ones quit because they can’t take the stress of it anymore – and i’ve had it happen to me too time and time again, and sometimes by people i trust. I try not to get worked up about it anymore though – as i recognize the fact that it is just going to happen. Over and over.

But more often than not, when someone is copied i see the same reaction – surprise and outrage.

I know it is upsetting, i truly commiserate… but getting upset won’t solve it.

Lets be honest though – it really shouldn’t be surprising when someone copies your designs. Essentially the whole concept of fashion is based on copying. We all try to emulate what we are told is stylish, we immitate our stylish friends, we ask “where did you get that?!” when someone has something amazing on. The clothing we all find in stores is a filtered down, interpreted version of what those fancy pancy high end design houses come up with. How else would each season of fashion be so thematic? How else could every designer begin releasing peplums at the same exact time, or some all powerful being decide we should all start wearing oxblood (which i insist is maroon). At some point you just need to accept that it’s the nature of the game. If you come up with something good, something special, something unusual – it will be copied.

But it’s not all bad news –  maybe it’s worse to not be imitated at all. There is after all the old adage, that imitation is the sincerest form of flattery. Here’s the important thing to remember: a copycat will always be one step behind you. They can’t outstrip you because they get their ideas from you.

They can’t create, they can only emulate.

Say that to yourself 10 times when it happens (because it will) and when you get upset (because you will)… and then have a cup of tea, because tea fixes everything :)

I was having a moan about being copied recently, and someone told me that a copy is never as good as the original. The spark is always missing. Which helped a lot – still makes me cross though!

I totally agree with you. I had a design job in the past where they literally went shopping to “design” that season’s line, 4 season’s a year, year after year after year. It happens on both large and small scales and I have come to realize it is just part of the apparel/fashion industry. Sad. But true. -ruth-

Thanks for adding your experience Ruth! I’ve heard this exact story from all of my friends who at one point worked for large design companies. It is sad, but i guess it’s just a pretty well accepted part of the industry now.

I used to get annoyed about feeling like I was being “copied”. For example, I’d change my blog design and then gradually see more and more blogs using the same background, colours etc. Or I’d be working on a garment or pattern design and then seeing similar things pop up online. I’ve come to realise though that it’s all in my mind – I’m not being “copied”. Rather, as you say, we all get our inspiration from somewhere, and trends spread… even if you don’t realise it’s a trend at the time! It’s bound to happen with clothing designs – there are only so many garment styles to go around, lots of people are going to be working on something similar at the same time.

Very well put honey!!! I think that is very true – and why so many people end up believing they were the “creator” of particular trends.

Though it unfortunately does happen that designs are blatantly copied – and that’s really sad. The saddest one i’ve witnessed was a friend of mine who shut down her brand completely because another “designer” began creating exact (seriously EXACT) replicas of her work at much much lower prices, and pitching her customers through her blog. It was heartbreaking :(

I was recently wondering about this exact thing! As an independent designer, do you have any thoughts on the difference between influence, inspiration, and straight-out copying? Is ‘inspiration’ executed without malice, while copying is? Does inspiration provoke the inspired person to put in more work, while copying allows you to take short cuts? Does influence/inspiration credit the source, while copying doesn’t? Argh!

Sometimes I’ll be falling asleep and a beautiful garment will flash before my eyes– I’ll get terribly excited to make that look, but then I’ll get bogged down with, “wait, are you SURE you aren’t unconsciously ripping someone off?”

That is a really brilliant question :)

I’m a pretty simple girl – my personal opinion is that being inspired by something is coming up with your own ideas, and your own spin influenced by elements of a design rather than copying the whole design detail for detail. Kind of like when you flip through a vintage book and try to give your own spin on an idea you found, or do a modern take. For me I think it’s a pretty easy line to demarcate. If you sit down with a picture of something someone made and replicate every element, then call it your own design, that’s not okay. But if you use similar elements in your own way it’s fine.

And honestly, when I talk about people copying – I mean in a business sense, not sewing bloggers or people at home making garments for themselves. The intent is vitally important. For example, i am never bothered when someone tries to recreate one of my designs for their own satisfaction, it’s actually so sweet! But if the person was to then sell the item in competition with my design, or if they were to try and pass it off as their own design – that’s really another thing, and falls into the category of copying in my book.

I break it down into 3 ways (because I am at heart a nerdy nerd and I like making lists hehehe):
1) What percentage of the garment is similar? I would only be concerned if pretty much the whole garment was exactly recreated.
2) What is the intent? Is it for personal use / for fun, or are they passing it off as their own or for sale
3) Who is the person? Are they a normal girl/a sewing blogger etc or another designer

I hope that makes sense?

Having said all that – I have the same worries as you, and have often scrapped designs I’ve loved at the last minute because someone else has released something shockingly similar just before me, and I don’t want to be perceived as imitating. I like being unique :)

But don’t you worry honey, go ahead and make the pretty things you think up !!! My hope with this post was to calm the fears of aspiring indie designers :)
Hugs honey!! Xoxo
Ps. Sorry for the essay

There is nothing new under the sun. Even the most progressive designs have borrowed elements and influence from predecessor creations. So, I think attempted ownership of a concept or idea as original is pretty difficult to justify, generally. That said, blatant duplication and imitation is a sad phenomenon. I’m sorry to hear that you’re struggling with copycats.

I completely agree Michelle!! Every time i look back at fashion through the ages (i love books hehe) i’m always amazed by the repetition of, and constant re-invention of the same looks and styles. I’ve often wondered whether it is possible to create something truly unique at all :)
And very well put, blatant duplication and imitation is a sad phenomenon.
But don’t worry – i’m not struggling with copycats – I’ve just received so many upset emails from friends of late, and seen people chatting about it all over that i thought it might be helpful to chat about it, and try and bring a different perspective :)
Thanks for your awesome input honey!!
hugs! xoxo

Such an interesting topic and something that I have wondered about a lot, but maybe in a different circumstance. Once I did a diy of a headband and later saw that someone else had made almost the exact same diy on their blog. I was upset that they copied me until i realized that their post had actually been done before mine. Then I was even more upset that she probably thought that I had copied her! In the end I just had to hope that she was cool and I also had to realize that we both had really copied something we had seen at a store. So either both or niether of us were at fault.
I often try to recreate things that I see at anthro or jcrew or something and do tutorials on my blog. Usually I am ok with it because its a big store, not an independent designer, but then I also something wonder about the ethics of that too.

I’ve heard that imitation is the sincerest form of flattery but I haven’t heard that copycats will always be one step behind you. So true! What a great and positive way to look at the situation.

P.S. – I’m not surprised somebody copied you :)

Independent thoughts and ideas are actually a lot more rare than anyone would realise. At any time in the world, there are often people coming up with the same ideas. Movies are a good example of this, a bug’s life and Antz coming out around the same time etc.

So true, and well said! I think it’s truly amazing how often it happens (and movies really are a great example, as it seems to happen really constantly and obviously in that industry).

I also have been known to argue that “oxblood” has always been “maroon” – haha! And I think it is quite frustrating when there are copycats – I don’t design (yet ;) but when I see someone who obviously took an idea that wasn’t theirs, it really makes me lose respect for them. That said, it really builds respect when there are designers who keep it original :)

Your article is just so right ! It’s annoying, and in your place I will be probably pissed off ! So bravo, and you’re right “a copycat will always be one step behind you” .. !

This is something I recently found really hard to understand and cope with. I’m a 15 year old girl and for years I’ve been wanting a block fringe, so the time came when I HAD to get one cut it was just the right time. Once I’d had it done and was enjoying it and getting used to it, I started to realise that some other girls were having it done and they would post pictures of themselves on facebook and get loads more comments and likes tahn I did, and i was frequently seeing other people with block fringes!! but one day i just stopped and thought, actually I’m spending wayy too much time counting how many people have ‘copied’ my hairstyle-that has been around for years- and I wasnt enjoying having my own style :) I know how frustrating it is, but we have to keep looking on and accept that its gonna happen because everyone’s like it! (I know I am!) :)

On patternmaking, inspiration and copying | IngeMaakt

Get access to our FREE subscriber perk sewing patterns, exclusive monthly discounts and be the first to hear about new patterns!