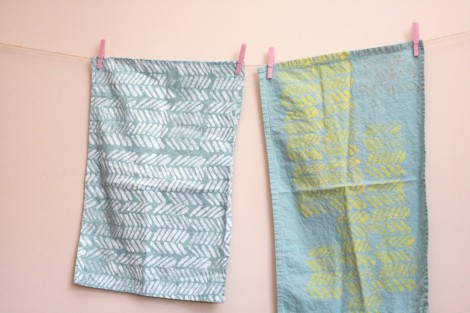 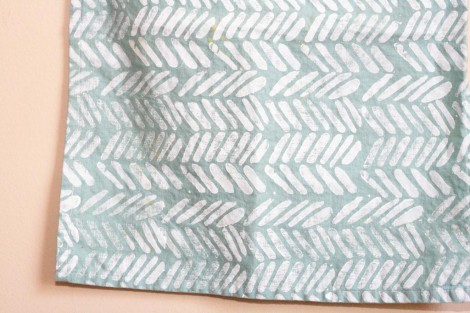 So after my first block printing experiment with a hand carved rubber stamp, i decided to try a real project. I rather like how they turned out! I absolutely fell in love with this screenprinted teatowel, and decided to try and mimic the pattern. The first stamp pattern i showed you was done with a rubber stamp – and this one was done with lino. Let me say this -> lino = evil. I much much much prefer the rubber. so much easier to carve, and the lino was so hard that i ended up cutting my finger really badly and it took days to heal.

Anyway, the yellow one was my first attempt – and to be honest, i’m not really sold on it. I wish i’d filled the whole piece of fabric, and i tried to use gold in one section and it just ended up looking dirty. ick. Also… i forgot to iron them before taking photos and now it’s driving me nutso… oh the shame!!! But lets forget that, can we?

But i do think the white one was a win! I really love it. I’ll give you one guess as to where i got the colour inspiration from hehehe 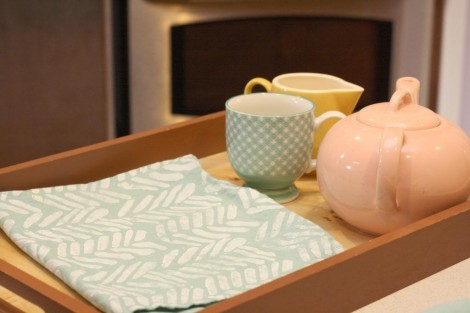 I’m more than a little obsessed with these mugs from West Elm. I may or may not have bought a bunch in every colour, raved about them constantly and then when they went on sale bought even more. I am pathetic… but i do adore them, so i figure it’s okay, right? hehe

Back to the teatowels: To be honest, the printing is not at all as neat as i’d liked – but i think that’s just the nature of hand blocking. I think if i really wanted something super clean then screen printing would be a better option. Though Chris tells me the roughness makes them more artsy – hehe i think that’s the explanation i’ll go with :) 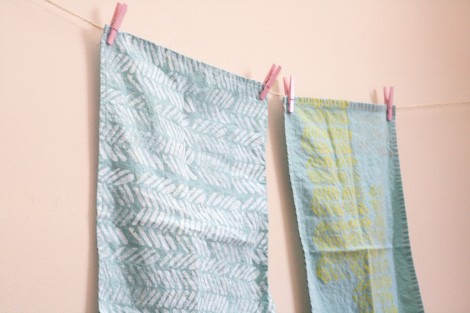 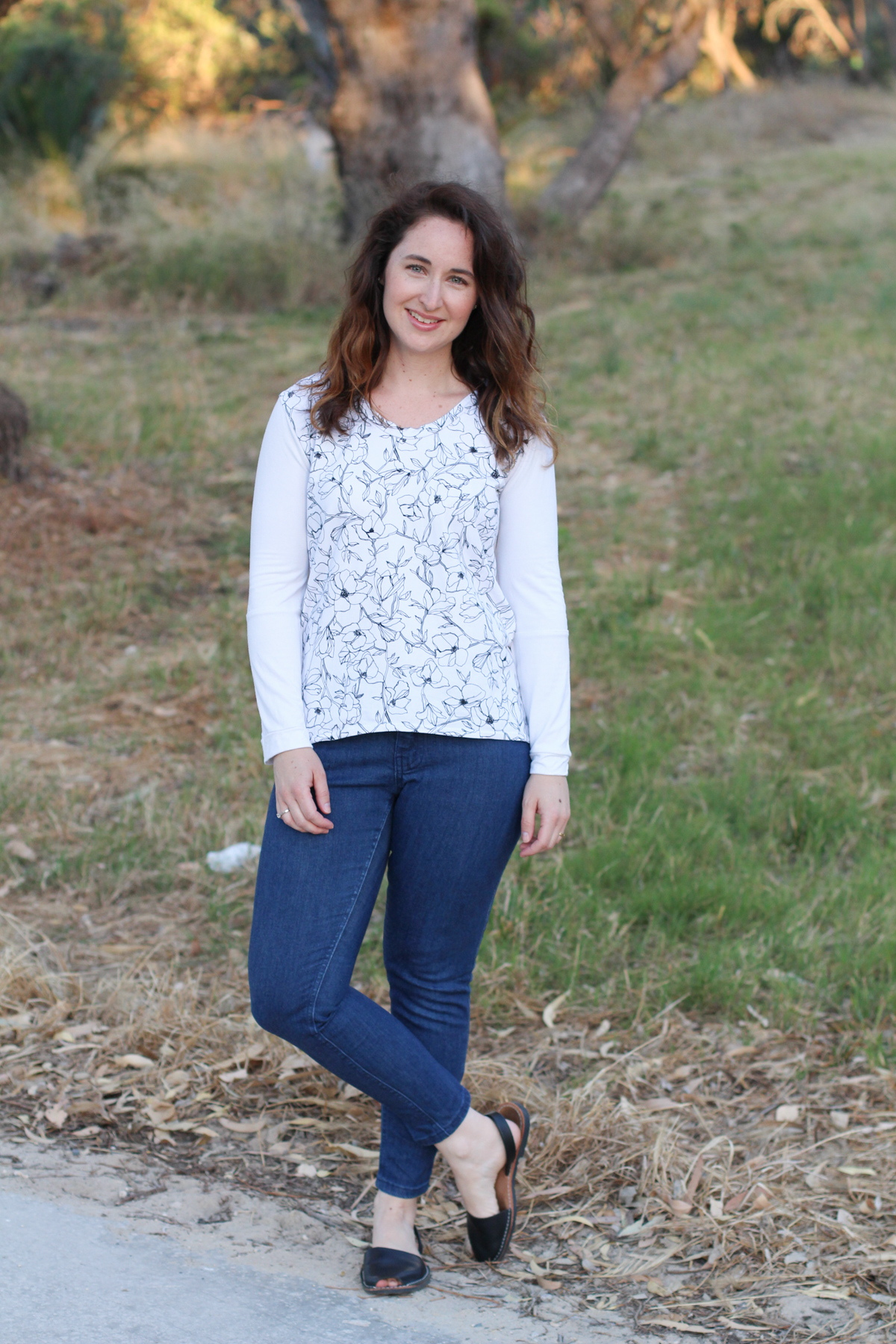 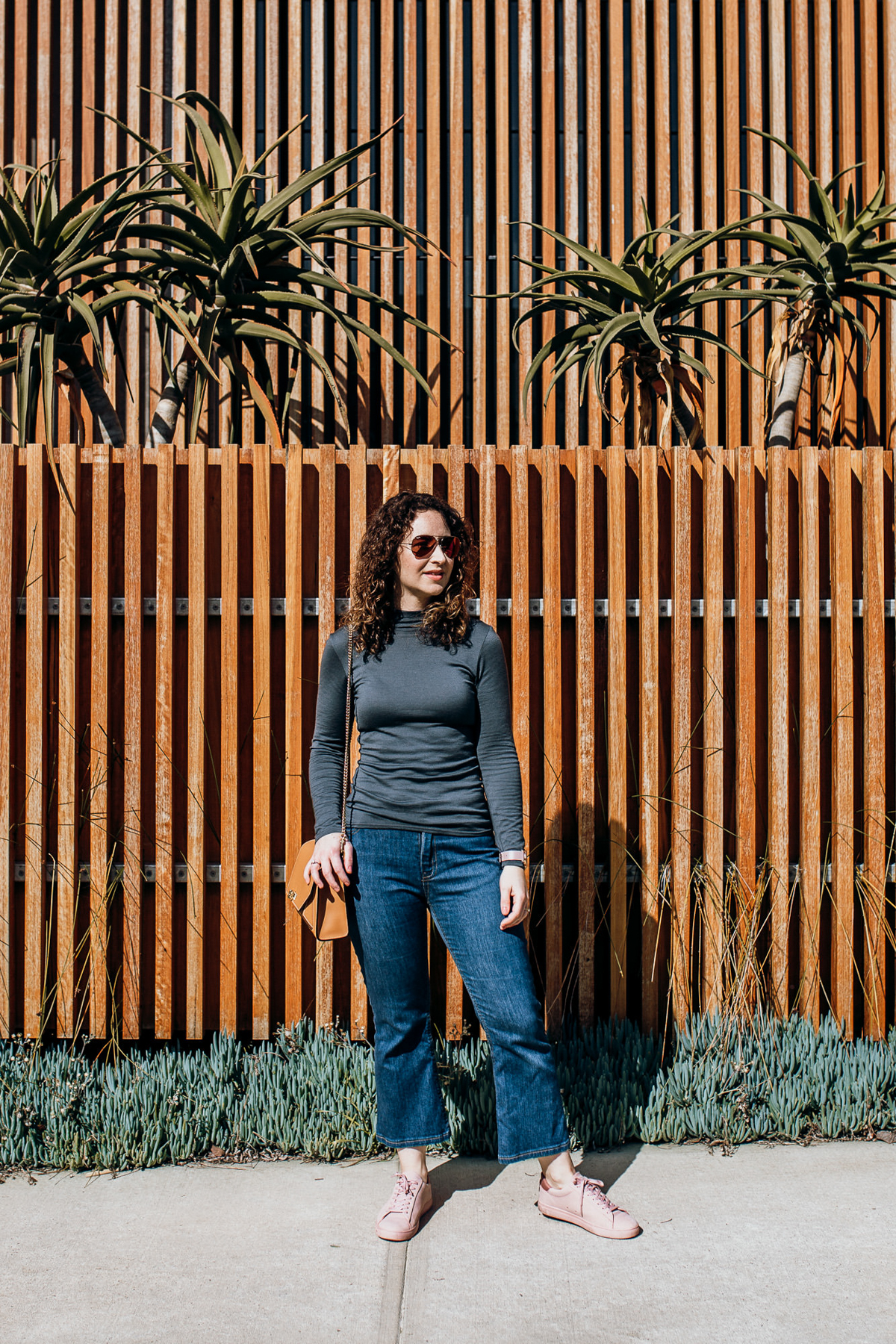 Oh yay! I love both of those. And don’t be too hard on yourself about your West Elm mug addiction. I love everything they make. It’s a problem. Note to self, must win lottery ;-)

The photo of the tray with your towel and tea pot and cups is precious. What wonderful colors and I am loving your handiwork!

I agree with Chris!

Hey…this looks familiar! I love it!! It came out great. That Etsy shop actually ran out of the tea towels so I may be comissioning you to make me some :) hahah

Those look great! The white one is my favorite. I want to try this out someday…

These are beautiful, such a great project!

Ooooh, they turned out awesome! So pretty – love the mugs too ;-)

i freaking love those! good job :)