Thoughts From The (Very) Late Shift… 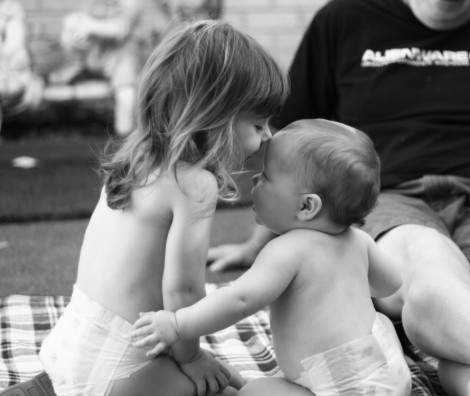 A little off topic today… I hope you don’t mind… but I was thinking a lot last night. You see my kids are sick today. And last night was one of those nights when I didn’t sleep, because I was looking after one, then the other, then the other…

Sometimes I fall into the trap of wishing a hard period of time will be over. But I’m learning to cherish all the moments… even the hard ones.

Those kind of nights don’t happen often. They’ve both been sleeping solidly through the night since they were 3 months old, so it’s only sickness that breaks the cycle. But when it does, I don’t mind too much. Because that’s when I’m really doing something important. When they’re ill or plagued by nightmares, and I’m sitting in my rocking chair soothing them, that’s the most important work I do. That’s probably the most important work I’ll ever do. That’s when I’m making a difference. That’s when I shine. And those are the moments i’ll miss oneday.

I try really hard not to resent those nights when I have to wake up constantly. Not to get upset that I’ll be exhausted the next day. I’m learning to cherish them, to burn them in my memory – because someday, someday soon – it won’t be like this.

They’ll grow up. And I won’t get to hold them in the middle of the night.

And it won’t always be the case that I can fix all their problems, and take all their worries away with a cuddle, a kiss and a lullaby.

That photo is beautiful and this post is about to make me cry…this is so very sweet, and so very true.

You’re a good mom. I hope you know that and I hope everyone tells you so.

My mum says the same thing to me, usually I just roll my eyes and go on my way, so you’re right, one day you won’t be able to fix a problem with a cuddle. Take my advice though, my mum and I aren’t as close as we could have been, probably because my mum is very different from me and rather than accepting that my opinions and likes are just as valid she would argue with me instead. It pushed me away and as much as I would like to be closer she hasn’t changed so we never will.

If your kid likes heavy metal, learn to smile and nod, if they want to cover their bodies in tattoos learn to compromise and learn to love what they do even if you secretly hate it. My mum would tell me I was too young to understand my own opinion, she still does this and I’m 25.

The thing is your kid will be more open to being your friend when they’re older if they know you accept them. You’ll get the cuddles then rather than awkward hugs.

What an incredibly odd reaction to such a sweet post?
Megan, thank you for posting this – you are obviously such a good mom! I hope when I have kids someday, I can have as good an attitude as you!

I do think the post is sweet, I wasn’t implying anything about her parenting, I think Megan is an amazing mum, I guess it just got me thinking about my own relationship with my mum. I have a friend who is incredibly close with her mum because her mum accepts her for who she is, they cuddle which is something I never do with my mum.

I guess what I was trying to say (and not doing a very good job of apparently) is that you don’t have to lose the ability to heal with a hug.

I totally get it sweetie :)Tone is soooo often misunderstood in text!! And big thanks to both Pam & Steph LOVE you guys XOXO

This picture is SOO sweet

Thanks hun! Those two literally spend the whole day cuddling each other – it’s freaking adorable!

Virginia Is For Lovers...

The Store Is Re-Opening